McKenna: Many Families Aren’t Sending Their Kids to Small Liberal Arts Colleges Anymore. Mine Isn’t, Either. Here’s Why 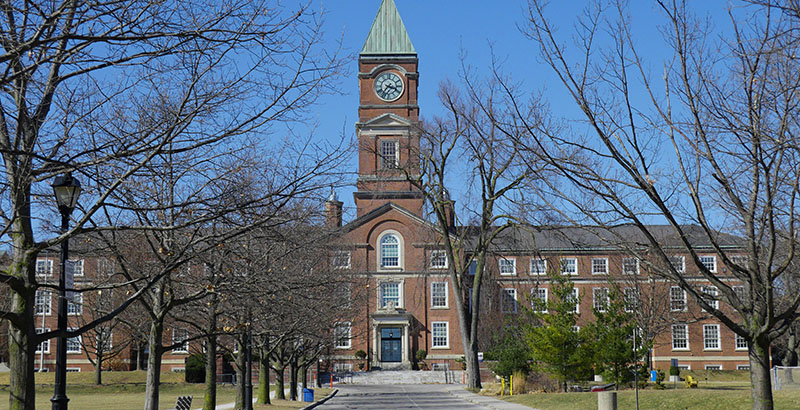 In January, two small liberal arts colleges, Green Mountain College in Vermont and Hampshire College in Massachusetts, announced that they were going to close or merge with other schools. They joined the ranks of other small schools that have closed in recent years, such as Mount Ida College in Massachusetts, St. Gregory’s University in Oklahoma, and Marygrove College in Detroit. Sweet Briar College in Virginia was flatlining in 2015 before being resuscitated from certain death, thanks to extreme fundraising efforts by alumnae.

Small private schools suffer from a multitude of problems, including endowments that are tangled in strings, a declining interest in liberal arts, a decreasing pool of college-age kids, competition from online education, and growing administrative expenses. But most importantly, they can’t get families like mine to send their kids to their schools. They don’t have enough students who can pay full freight and are interested in the slower pace of a small liberal arts campus.

My family’s experiences helping my son choose a college illustrate the parental calculations that are shaping the higher education landscape.

A couple of years ago, my son applied to 12 flagship public universities. There wasn’t a single small private liberal arts college on the list. Not Lehigh, not Franklin and Marshall, not Alfred. Why? We wouldn’t have been able to afford our mortgage and save for retirement after paying the tuition bill at those private colleges. My son also wanted all the excitement and opportunities of a larger school.

Like a lot of middle-class families in the Northeast, our income was too high to qualify for financial aid but not high enough to easily absorb new expenses totaling $70,000 per year. A late start on our careers meant we didn’t have much in a 529 plan to cover those costs. Financial aid officers didn’t care that we had another son with special needs, who required expensive therapy and special camps.

With the nearly $300,000 total tab for four years at a small liberal arts college, one could buy a nice starter home in a suburb around New York City. And given that only 33 percent of students nationwide graduate from college in four years, the final price tag might be big enough to include the cost of a car, too. We were unwilling to take out a second mortgage on the house or burden our son with six figures in loans.

He might have qualified for merit aid based on his high SAT scores, but only at a small college that was ranked significantly lower than the target colleges on his list. Going there would have put him at a disadvantage in the job market or graduate school down the road.

So would the lack of name recognition. For my son to be considered for job opportunities around the country, employers in Seattle and Houston and Chicago would need to recognize his school. Beyond the top 30 or 40 most competitive name-brand private schools, like Harvard or Cornell, few have a national reputation.

As it turned out, my son learned that he wasn’t interested in those small, private schools anyway, during our tour of colleges the summer before his senior year. The big schools had more of everything — large stadiums, student centers with soaring ceilings, greater diversity, wide, green lawns. Tour guides at those schools were able to brag about new state-of-the-art career centers, business programs, and internships. Campuses were bustling with activity, like mini-cities of progress. They were Disneyland for geeks and Greeks. Most were located near cities with even more attractions. In contrast, he thought the small colleges looked like high school.

His friends in our upper-middle-class suburb made similar choices. Even families that could afford private school tuition picked large public colleges, like Maryland, Delaware, Michigan, and Miami of Ohio. For many of my son’s friends, the large business schools at the public universities sealed the deal, which isn’t surprising, because business is the most popular major nationwide. But at small liberal arts colleges, it’s just not available.

Parents all over the country are making the same calculus our family and neighbors made, weighing cost, opportunities, and preferences. Small colleges simply can’t compete.

Given their financial difficulties and their admission problems, it’s not surprising that Harvard professor and management expert Clayton Christensen predicts that as many as half of American colleges could close over the next 10 or 15 years.

Good friends of mine are on the faculty at endangered small colleges like Hampshire and Green Mountain. They’ve worked hard to educate students and believe in the core missions of their schools. Each has its own unique personality and traditions. Students can form real connections with their professors because of the small student-to-faculty ratio. Schools like these are particularly useful to students with learning differences. Because they aren’t lost among hundreds in a lecture hall and the bureaucracy isn’t overwhelming, students are more likely to finish college in four years than at the larger schools.

But we’re a practical-minded group today. With fingers crossed that our kids can manage in the sea of tens of thousands of students, we’ll forgo quaint Gothic buildings and 60-year-old traditions in order to launch our children into the job market with as little debt as possible. Right now, large flagship public colleges are doing that best.

Laura McKenna, Ph.D., is a New Jersey-based education writer with over 30 years’ experience in education — as a teacher, researcher, professor, and parent.