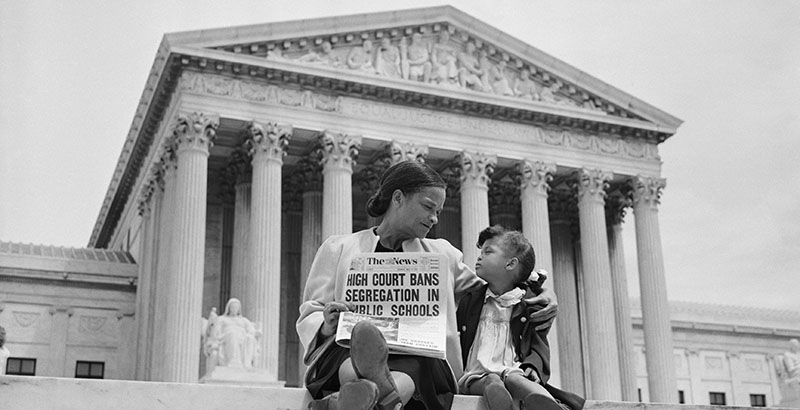 Nettie Hunt and her daughter Nickie sit on the steps of the U.S. Supreme Court following the high court's ruling in the Brown v. Board of Education case. (Getty Images)

A version of this essay originally appeared on the NAACP Legal Defense and Educational Fund blog.

Ethel Brown was born with a heart condition. But because she was black, she had no choice but to travel 20 miles each day to attend Howard High School, the only public high school in the state of Delaware that admitted black students in 1950. Her mother, concerned about Ethel’s ability to make the trip, petitioned the school board to allow Ethel to attend nearby Claymont High School, which was reserved for white students. Her request was denied. Despite Ethel’s status as a young girl with a severe medical condition, she was treated as unworthy of any protection simply because of her race. Fed up, her mother, Ethel Lee, joined a group of black parents bringing a lawsuit, Belton v. Gebhart, in one of the five cases that eventually became Brown v. Board of Education —the landmark Supreme Court case litigated by the NAACP Legal Defense Fund that ended segregation by law in American public schools.

Today, Ethel’s story remains largely unknown, as do the identities of many black girls who were vastly overrepresented as plaintiffs in the courts and as the leaders behind school desegregation organizing efforts. In Prince Edward County, Virginia, for example, 16-year-old Barbara Johns, in defiance of her principal, led a walkout of her fellow students at Moton High School, her segregated high school, to protest the inferior facilities and subpar educational materials given to black students — an act that was the catalyst behind Davis v. Prince Edward County School Board, another companion case to Brown. Indeed, in the underlying case that originated in Kansas and provided the name most people know, Brown v. Board of Education of Topeka, all but one of the plaintiffs were women.

In her recent book, A Girl Stands at the Door, historian Rachel Devlin explores why so many black women and girls were the voices behind the school desegregation movement. She suggests that these women’s decisions were often shaped by a heightened awareness that resulted from the combined forces of institutional racism and sexism, writing that, for black girls, “their daily lives were full of insults, surveillance, harassment, sexual harassment, from white men on the streets, from men and boys in the houses where they worked and from adults in general.” Despite the myriad challenges they faced, black women and girls bravely took action to effect change in the American educational system — and continue to do so today.

Unfortunately, racial bias in schools did not end with Brown v. Board. COVID-19 has exposed fundamental educational inequities in public education that still have not been fully addressed more than 65 years after the Supreme Court decided Brown v. Board. Black students today are six times as likely as white students to attend a high-poverty school, and nearly 75 percent of black K-12 students attend racially segregated schools. Like high-poverty schools, racially segregated schools are likely to have high levels of teacher turnover, inadequate facilities and fewer classroom resources. Educators are already predicting that the existing academic achievement gap will become more entrenched as distance learning continues, due to the digital divide and other existing economic and educational disparities.

Yet even in the face of pervasive racial bias, the unrelenting commitment of many young black women to speak out about injustice in their schools continues. In a 2018 study published by the Legal Defense Fund, for example, black girls in Baltimore city schools reported that they are routinely told to be polite and quiet and to not “make a big deal out of things” at school. Nonetheless, these young women expressed a duty to advocate for justice when they believe conditions at school are unfair. They expressed concern with instances not only of individual unfair treatment but also of systematic inequity, including the quality of education, disparities in discipline, police brutality and a lack of financial investment in their schools. These girls felt it was unjust that their schools were plagued with problems that did not exist in whiter, more affluent schools — problems about which they were expected not to complain.

In some cases, these girls were punished for being too outspoken. Indeed, national studies have shown that, compared with their white peers, black girls are more likely to be harshly punished, and adult educators are more likely to perceive black girls as needing less protection, nurturing and support — and more in need of discipline for violating social norms, especially when it comes to subjective offenses in which black girls are perceived as challenging authority.

We are all indebted to the young black women who were on the front lines of the fight to end the system of apartheid and white supremacy that once defined American schools. These girls created the records that led to the end of de jure segregation in the lawsuits they joined and put their bodies on the line despite the social isolation and physical violence that often followed. Now, more than ever, student activism matters as our country decides how to respond to a public health pandemic and the systemic inequities that make black and brown communities even more vulnerable.

Recognizing the historical legacy of the black girl heroes who have largely been relegated to the footnotes of American history can help us to better understand black girls who challenge the status quo today, and help us to better protect and support them as students and as future leaders.