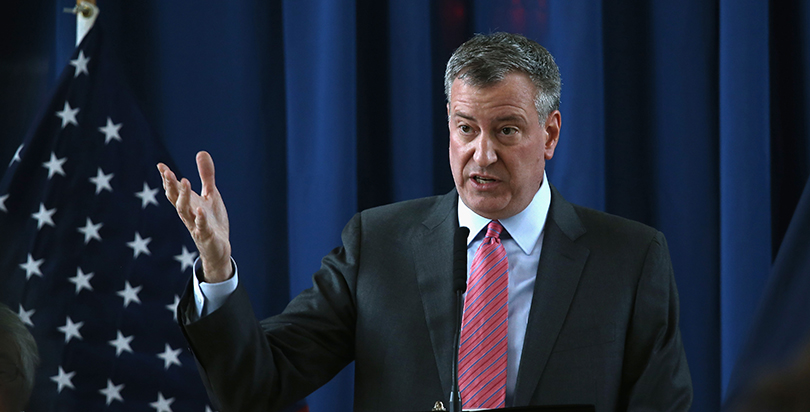 In a victory for Mayor Bill de Blasio, the state’s Republican-controlled Senate voted Thursday to renew mayoral control of New York City’s public schools for two years, ending a remarkable session called by Gov. Andrew Cuomo after the legislature failed to vote on a renewal during its regular calendar.
Without the vote, mayoral control would have expired on Friday. The hostility of Republicans — who have looked to thwart de Blasio since he backed Democratic candidates for the upper house in 2014 — and the tepid response among Assembly members to the mayor’s often undramatic reforms, made a once-unthinkable end to mayoral control appear possible in recent weeks.
(The 74: The Fierce Fight Over Mayoral Control Reflects De Blasio’s Weakness on Education)
Senate Republicans said they would not vote to extend mayoral oversight without an increase in the number of charter schools that could be created in New York. Instead, in approving an omnibus proposal stitched together and finalized by the Assembly early Wednesday after an apparently fruitless and frustrated day of meetings, the Senate voted 48–2 in favor of a package that included extending county sales taxes, flooding and pension relief, and renaming the new Tappan Zee Bridge after Mario Cuomo, the governor’s father.
“While this extraordinary session was called initially by the Governor to deal with issues related to New York City,” Senate Majority Leader John Flanagan said in a statement, “Senate Republicans were able to put together a more comprehensive package that meets the needs of taxpayers, students, and families throughout our entire state.”
Flanagan said Senate Republicans helped ensure “charter schools continue to play an important role in the education of schoolchildren” in New York City, but it’s not clear if charter schools are even mentioned in the legislation.
De Blasio’s first term ends this year, but he is heavily favored to win re-election in November (even his distantly trailing Republican opponent dropped out this week). Most public officials and education leaders in New York City expressed support for mayoral control, which replaced a decentralized system that suffered from corruption and patronage for decades.
Submit a Letter to the Editor
June 29, 2017