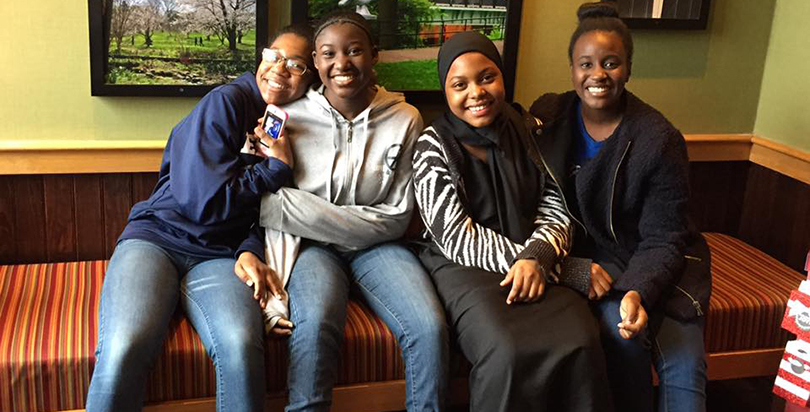 Tajir’s mom decided he needed a new school. After searching Great Philly Schools, she chose to enroll her sixth-grader in Philadelphia’s Young Scholars Charter School. “When we rolled up and I saw the building, I thought, ‘Ugh, that is so plain!’ I didn’t know if I could even walk in there,” Tajir said. “But do you ever get somewhere and it feels like you just belong? That’s what it felt like.”

Tajir is one of 260 students who travel from 28 different ZIP codes to attend the charter middle school. I traveled there in November from Washington, D.C., on a quest to find America’s best schools. Using SchoolGrades, an online tool built by my colleagues at the Manhattan Institute to evaluate schools with a consistent, meaningful standard, I searched the 20 largest cities for schools that received an “A” grade and were also surrounded by “D” and “F” schools.

Then I went to find out what sets these schools apart.

And though Young Scholars’ low, squat building looks plainer than a lump of coal, it truly is a diamond in the rough. In an era when charter schooling is becoming a more national and potentially more toxic conversation than ever, it’s important to take the time to highlight small local schools that provide the best education in their neighborhoods.

Young Scholars prides itself as being among the highest-scoring high-poverty schools in Pennsylvania. Although some charter critics allege that schools like Young Scholars excel because they “teach to the test,” what sets this charter apart is its focus on the whole child. Every day at Young Scholars begins with an hour-long community- and character-building exercise, either “Morning Meeting” in their homeroom or a grade-wide “Community Circle.”

The topic of discussion at this “Morning Meeting” was Donald Trump. To my pleasant surprise, the conversation was as informed as anything you’d hear in Washington and a great deal calmer than you’d encounter on a college campus.

Meanwhile, Mr. Tucker leads students in “Community Circle” through a recitation of an inspirational poem. Tucker says that his goal is to “give our students more ‘at bats’ at gratitude, empathy and the real skills in life.”

Later, I ask Demaine, an eighth-grader, if he thought this might all be a bit too fluffy for a guy like him. “No, I’d never say that. You gotta do this stuff a lot. Look someone in the eye, shake their hand, then look them in the eye. When I meet new people, they tell me what a respectful young man I am,” Demaine beams.

“Principal Campbell shakes everyone’s hand every morning. She knows us. She knows what’s going on with us.”

Melissa Campbell spends nearly the entire day on her feet, and she isn’t content to let her school rest on its success. “To be honest,” she tells me, “it feels like we’ve been stagnant for the last couple of years. But this year it feels like we’re really turning a corner and poised to take off.”

Campbell says that in recent years her school had been sidetracked by its former charter management organization. CMOs are designed to help charters with their administrative work, but sometimes they can be more trouble than they’re worth. According to Campbell, the school’s CMO was trying to support too many school models in too many states. Campbell recalls that the organization would make decisions without consulting the school, and at times it made them feel more like middle managers than school leaders.

This is a useful and cautionary lesson for the charter sector. Policymakers and charter advocates often press the need for high-performing charters to “scale” and, in an attempt to drive quality, have put in place a raft of regulations that make stand-alone charter schools more difficult to get approved — and, if they are approved, more difficult to maintain operations. But the urge to scale through CMOs can sometimes wrap charters in the kind of red tape all too familiar to traditional district schools.

But just as ineffective charters can shut down, so too can inefficient CMOs fold. Young Scholars’ CMO dissolved last year, and Principal Campbell is excited by what she can do with her newfound flexibility and freedom. The first order of business is to intensify the school’s focus on guiding graduates toward college-prep high schools.

Demaine tells me that he’s already seen some of his friends from elementary school fall through the cracks elsewhere. “It’s hard if no one but your mom and your best friend believes in you. But here, everyone believes in me.”