Matt Damon Chose Private School for His Kids. Great. But Why Is He Making a Film About Denying School Choice to Poor Families? 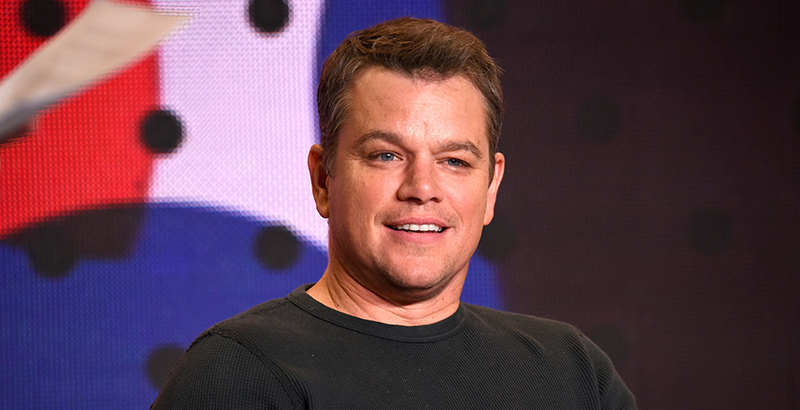 Looking through Rotten Tomatoes ratings of Matt Damon’s movies released in 2017, there have been two hits (Downsizing and Boston) and two misses (Suburbicon and The Great Wall).

Get ready to add another bomb to that list: Backpack Full of Cash, a 90-minute documentary on the school reform movement’s corrupt obsession with the “privatization” of public education. Even if the film reaches some measure of success in ticket sales, its message will remain a loser.

If you have seen the name Matt Damon coupled with the key search phrase “public education” at any time over the past four years, then you know two things: 1) he’s been a speechifying celebrity guest at rallies paid for by teachers unions, and 2) when the time came for him to find a school for his daughters, he chose highly competitive private schools.

Beating him up for his great white hypocrisy isn’t new.

A string of Damon-is-a-hypocrite stories have run in major media and on blogs. I agree with the hypocrisy angle, but I don’t see it as the primary problem with Damon’s advocacy.

The problem is the unearned social power his name and celebrity give to an issue he dabbles in, an issue where even his most lazy advocacy could move the public toward policies that prevent families without millions of dollars from having educational options they want and need.

Matt Damon is an awesome actor. He shouldn’t be a bald white hammer against school choice or charter schools for families that will never make it to Hollywood.

When cornered on his decision to choose private schooling, he says it wasn’t a choice at all (but, Matthew, it was). Private schools, he says, are now the only place remaining for a family to get the same brand of progressive education he enjoyed in alternative public schools: “I had that chance in the public schools I attended and I want to see it given — fairly and on an even playing field — to every child in our nation.”

Damon’s family moved to Cambridge, Massachusetts, when he was 10 years old specifically because there was a school his mother, an educator, wanted him to attend.

His high school, Cambridge Rindge and Latin School, is one of America’s rare schools where whites are in the minority (39%), poverty is relatively high (46%), and the academic performance is stellar. According to Fred Fantini, a 30-year school committee member, Latin had separate “houses” (schools within a school) that varied in quality and levels of integration.

“In the ’90s…we had programs like the Pilot, where Matt Damon and Ben Affleck went, which was a great program. And we had the Leadership program. They weren’t integrated, but they were great programs,” Fantini said in an interview.

A New York magazine article from 2003 described Damon’s home in Cambridge as “awash with Ph.D.’s and worldly, upwardly mobile intellectuals, living together in the most cultured, highest-I.Q. municipality in all of Greater Boston.”

Nancy Carlsson-Paige, Damon’s mother, is one of those highly educated “intellectuals” who inspired him to lend his heaping social capital to public school teachers. She is also a fierce opponent of education standards, student assessments, charter schools, and accountability in the classroom.

She told The Progressive magazine that school reform has made teaching unattractive by focusing so intently on student outcomes. “The kind of language we have now of accountability, and data, and management, and evaluation, it’s so uninspiring, even scary: Who wants to go into a field where you get evaluated by your kids’ scores or mandated standardized tests?” she asks.

In a speech, she said, “It pains me now to see how teachers are mistreated in the public arena of this moment in history, to see teachers blamed for the gap that exists in performance between low-income and black and Hispanic students and their peers. The achievement gap exists before children ever meet their teachers.”

I have found no record of her response to her grandchildren enrolling in private schools, an act that presumably conflicts with her paleoliberal worldview about public education, segregation, and inequity.

While aping all the motions his mother would have him do before throngs of aging unionized teachers who rally to keep kids without his astounding privilege trapped in schools he would never choose for his adorable youngsters, Damon is willing to pay whatever it costs to defend their advantages. He wanted his kids to attend St. Ann’s, a New York private school so exclusive (with tuition reaching $42,555) that it could do what few other schools would ever do: rebuff the likes of a Damon family (his kids didn’t get in).

Would he support publicly financed scholarships to St. Ann’s? Doubtful. Choice schools are for the uber-wealthy.

It’s a liberal cliche that connects Damon to academics like Diane Ravitch, journalists like Valerie Strauss, and even civil rights executives like Hilary Shelton from the NAACP. They all have privatized the education of their own children while attempting to put poor kids in the educational equivalent of public housing.

That’s Shelton’s choice, too. He traveled the country last year assailing charter schools for allegedly cherry-picking students, having uncertified teachers, and not being accountable to the state, all the while having kids receiving nearly $100,000 worth of private school education.

The problem isn’t incongruity between our words and actions. It’s when our incongruity becomes a doctrine that we weaponize against others.

Be a public school advocate who chooses private schools for your kids. Fine. But don’t use your power, privilege, and social position to mislabel those who claw their way out of the same public schools you avoid as politically motivated and socially irresponsible tools of big business.

Yes, there are people in the world who would love to get the lion’s share of the $600 billion America invests in the education of children. Unfortunately, the best-organized group with its claws in that money are the folks cheering Damon at Save Our Pension rallies.

The truth is, seeing students as a “backpack full of cash” is more characteristic of those laboring to limit our kids to traditional schools than those spending large sums of money to emancipate us from them.