Masks, Divided Tables, Assigned Spots on the Rug: Inside One Preschool’s Strategy for Coping With COVID-19 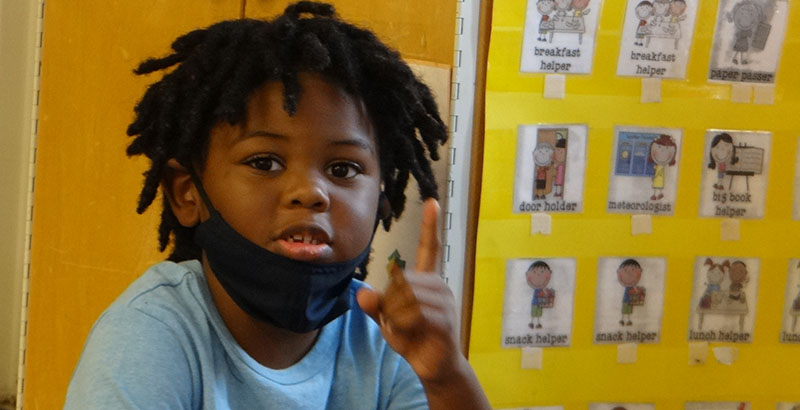 Blake Metcalf, 5, watches his teacher read a story at the Louis Stokes Head Start Center in Cleveland. For Blake, like other students at the center, his mask is sometimes on and sometimes down around his chin as the day goes on. (Patrick O'Donnell)

Teacher Shereldene Scott wears a surgical mask as she looks down at the half dozen preschoolers seated at their assigned places on the rug at her feet at the Louis Stokes Head Start Center in Cleveland.

Three children have masks snugly around their mouths and noses, for the moment, while the others have their masks tucked under their chin. One student has no mask at all.

Scott holds up an oversize model of teeth and a toothbrush that’s two feet long for her students to see. The children, who have just had breakfast, would normally be at the classroom’s sink to brush their teeth and teachers would be making sure kids are doing it right — one of the many health-related lessons the federal Head Start program teaches so kids can thrive.

But brushing teeth adds health risks during the COVID-19 pandemic, so the preschool has made adjustments.

“We’re going to pretend,” says, Scott, who acts out putting toothpaste on the brush and scrubbing both the top and bottom “teeth” before letting students brush them. 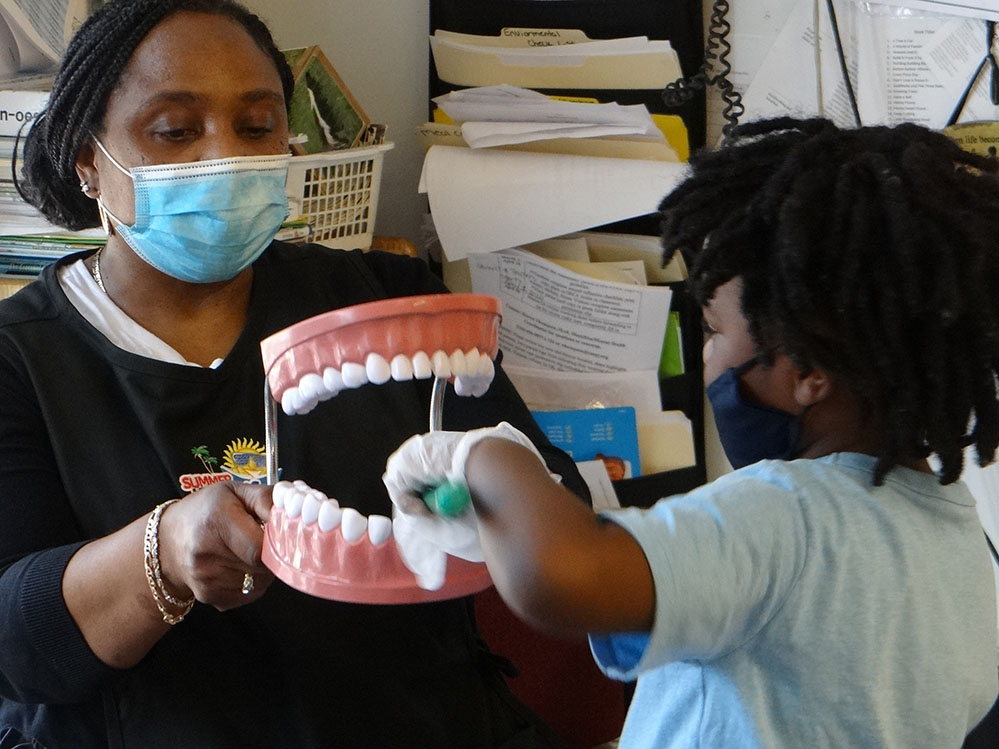 Shereldene Scott shows students at the Stokes Head Start Center how to brush their teeth. Scott, like all adults at the preschool, must wear a mask all day, but students don’t have to. (Patrick O’Donnell)

Masks, small numbers of kids, assigned seating and mock brushing are just a few of the adaptations this Head Start center has made since the pandemic hit Cleveland in March. It’s also one of the few early childhood centers in the city that found a way to keep going, even just as a trial over the summer to work out how to reopen in the fall.

Before COVID hit, Cleveland had 587 state-recognized child care centers, according to the Ohio Department of Job and Family Services. By late July, just 188 had reopened.

Cleveland’s county, Cuyahoga, was hit hard too, just not as dramatically, dropping from 1,227 centers to 406.

That fits the national pattern of preschool participation dropping to half of its pre-pandemic levels and concerns that close to half of preschools and child care centers could close without federal financial assistance.

That’s a major worry for cities like Cleveland, which has sought to increase preschool participation to better prepare its high-poverty students for school. That concern is also rising in cities like Los Angeles and Chicago, where experts worry that learning gaps between poor and affluent kids will only grow larger without preschool. 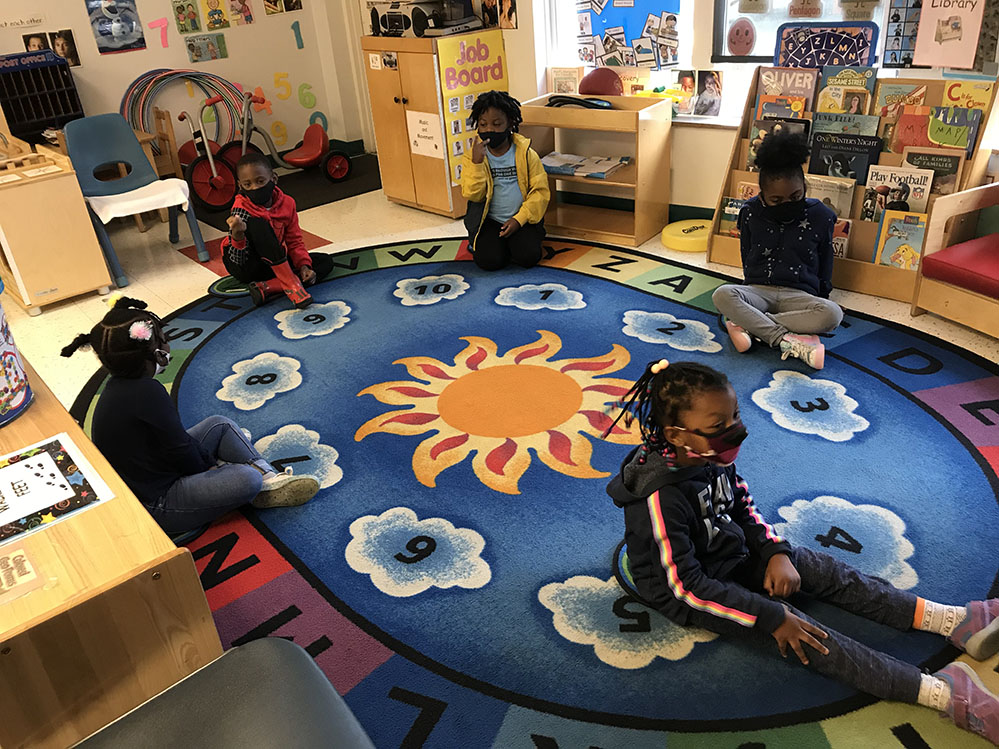 Students sit spaced out in assigned spaces on the rug for group activities like stories and some lessons. (Patrick O’Donnell)

For the Council for Economic Opportunities in Greater Cleveland, one of two main providers of the federal Head Start preschool program in Cleveland including Stokes, the pandemic has hit hard.

Before the pandemic, the nonprofit organization had 1,017 kids — all ages 3 to 5 — in full-day preschool at 11 centers in the city. When it reopened in May, only 200 came back.

“What we’re jumping up against is parents’ fears of bringing their children back,” said Jacklyn Chisholm, the council’s CEO. 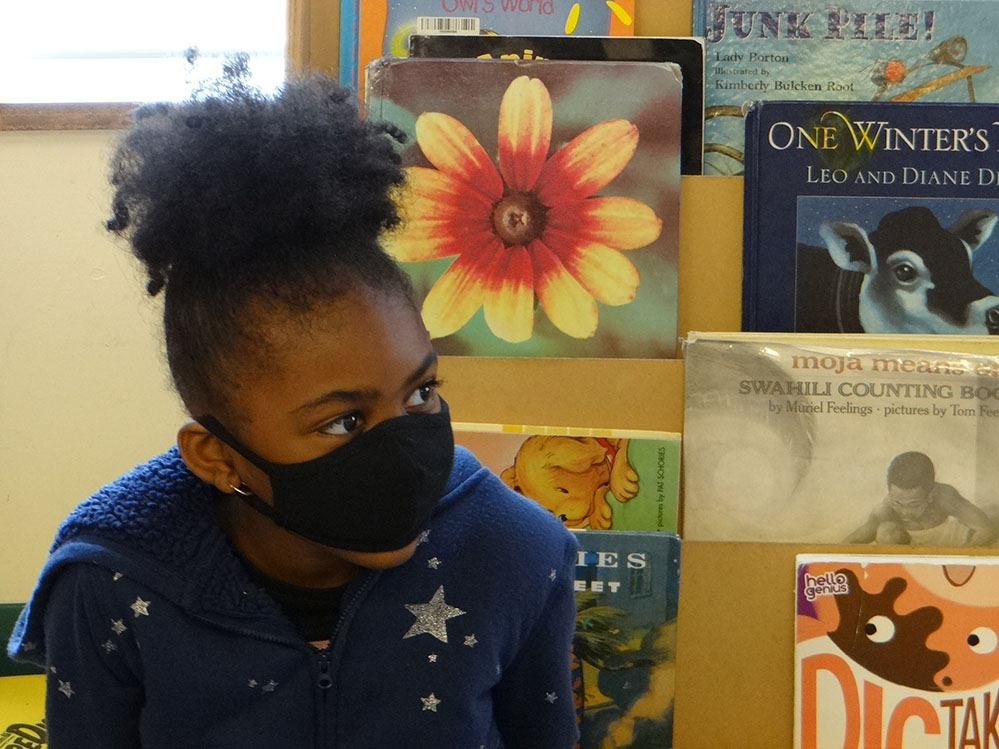 So the council made some changes, with an eye toward opening all 11 of its centers in the fall. This summer, it opened up just two of its 11 centers with two classrooms in each for half-day programs.

Fewer kids: The center normally had about 18 kids in its preschool classes, but Ohio limited classes to nine children in May. Even fewer came to school the day The 74 visited Stokes.

The state has since allowed preschools to have more kids per class again, but the council will keep the limit at nine for the fall.

“Parents are hesitant as it is, so I’m not going to endanger anyone,” said Thea Wilson, who runs childhood programs for the council. “That’s not our purpose at all.”

Screenings: Each morning, students have their temperature taken before entering class; and parents are asked if they or their children have any COVID symptoms.

Students also wash their hands as soon as they enter their classroom and after meals. 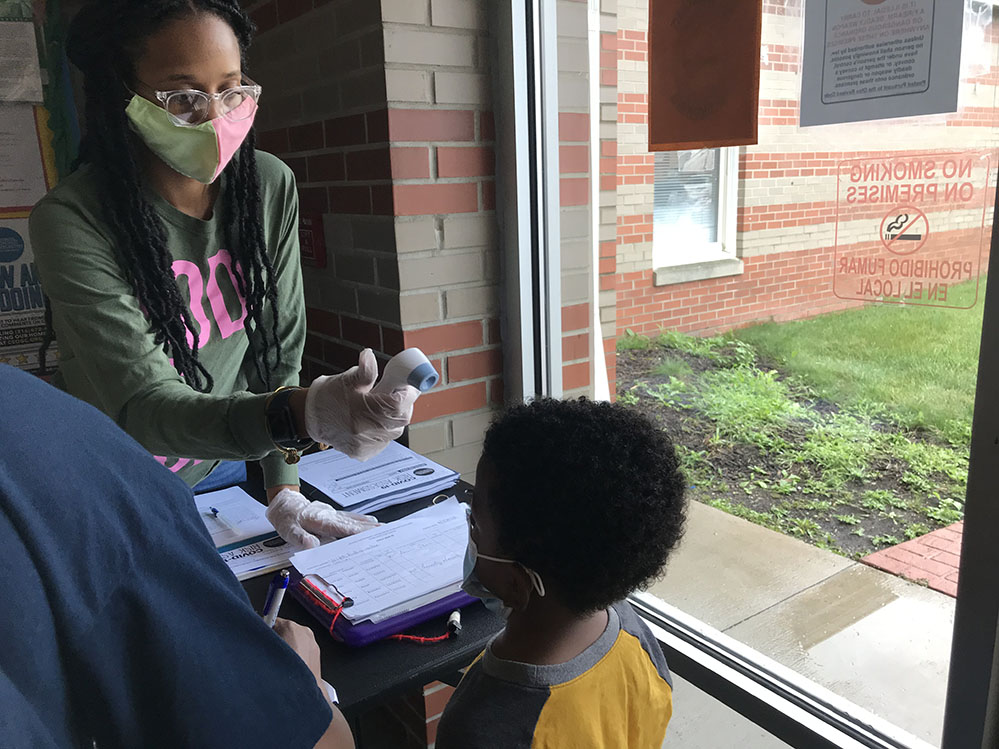 Staff at the Louis Stokes Head Start Center take the temperature of every student as they enter each day. (Patrick O’Donnell)

Distancing: The social distancing of six feet recommended for adults won’t really work all the time for 5-year-olds. But the center took the giant rug where kids normally sit crowded around the teacher or playing with each other and assigned each child a spot.

As students watched a “Pete the Cat” video with Scott and sang along, they were separated in a circle at the edges of the rug. After eating breakfast, they returned to their own spot on the rug. The children stayed in their spaces, with small amounts of edging closer to a neighbor to talk.

The center also creates distinct spaces for each child at desks. A strip of red tape splits each of six-foot tables for kids in half, giving each child their own three-foot zone to eat and do crafts in.

“Truthfully, it’s kind of sad to see children not being able to really engage like they would engage in a normal school year,” Wilson said. 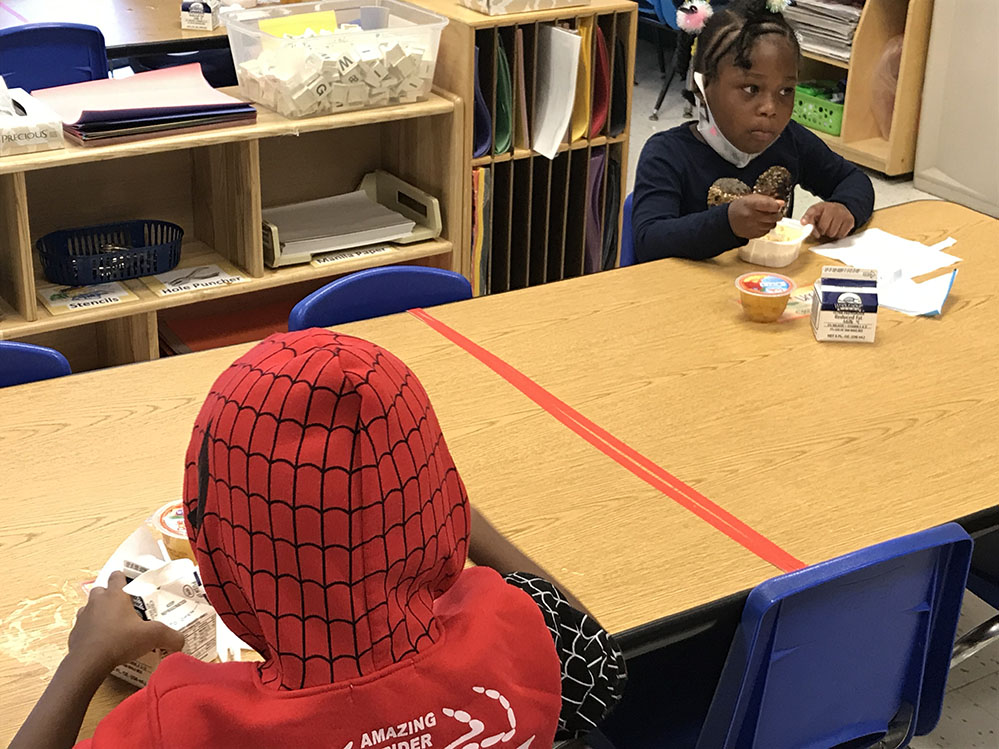 Students have assigned eating and craft spaces marked off with strips of red tape on tables. (Patrick O’Donnell)

Sharing: There is none. Each child has a bin for their own crayons, scissors, clay and workbooks. They don’t share toys to play on the rug, like they normally would. That’s a real loss too, said Wilson.

“The social development of learning how to share is no longer in the classroom,” she said. “For an early-childhood professional, that’s a really tough piece. Children need to learn how to share, and the only way is to share.”

Masks: The center follows the guidance of the state health department, which just started mandating them for kindergarten students and up. All adults wear masks, but the students don’t have to.

Wilson hates that students won’t be able to see the teacher’s mouths and facial expressions, which affects how well kids learn to speak and gauge people’s emotions, but she has to work with the restrictions.

Almost all students came to the center that day with a mask, and most wore them all morning, other than when eating. But some left them hanging under their chins after lowering them for breakfast. 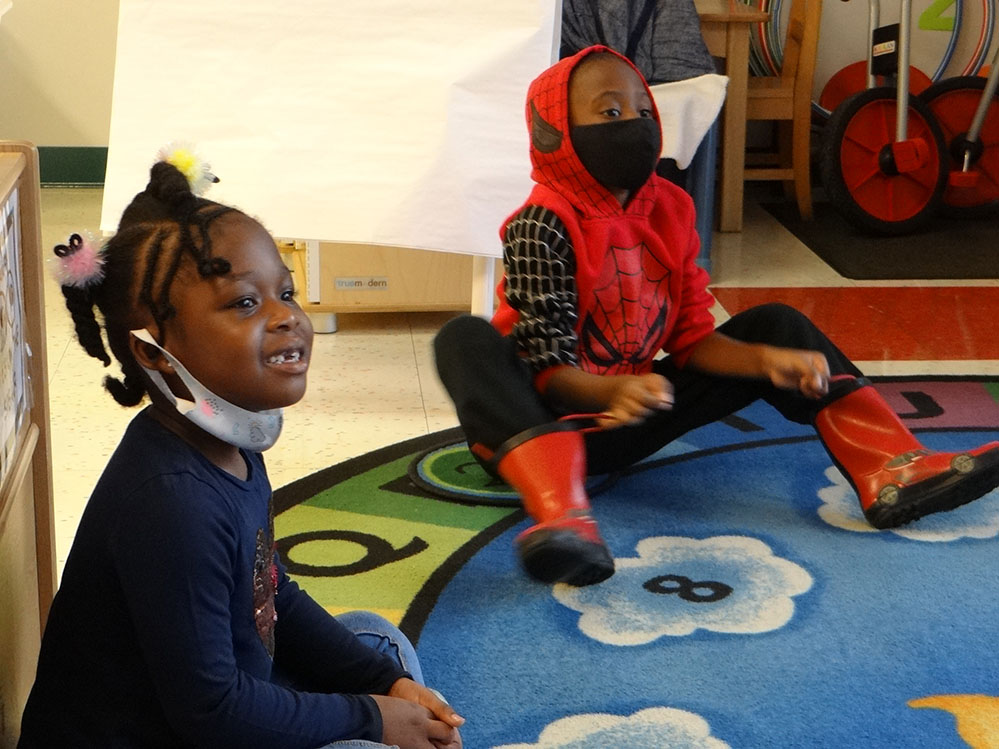 Some students at the preschool wear masks all the time, while others wear them sometimes. (Patrick O’Donnell)

Rebekah Madden-Wright, the classes’ co-teacher, said she understands that masks are hard for kids to wear constantly. She said she feels safe — “for the most part, If we just keep our distance and have the kids wash their hands.”

Parents said they are comfortable with the safety precautions at the center. Lauren Burge has been sending her daughter Brooke to preschool there for two years and will keep doing so.

“I love the people, and I love the staff, and they wouldn’t put her in harm’s way,” Burge said. “Plus, they don’t have a lot of kids and they keep them apart. They play together without playing together.”

“She’s been here three weeks and she’s still healthy,” she added with a laugh.

Dominique Harris said she likes the small classes and precautions like masks and distancing and a half day. She also relies on the program “heavily” for child care for her son Devin while she works as a social services case manager.

“That gives him a break and it gives me an arrangement,” she said. “With day cares being limited, it would be kind of rough.”

Devin doesn’t mind wearing his mask, he says, because it’s black and “so I don’t get sick.” 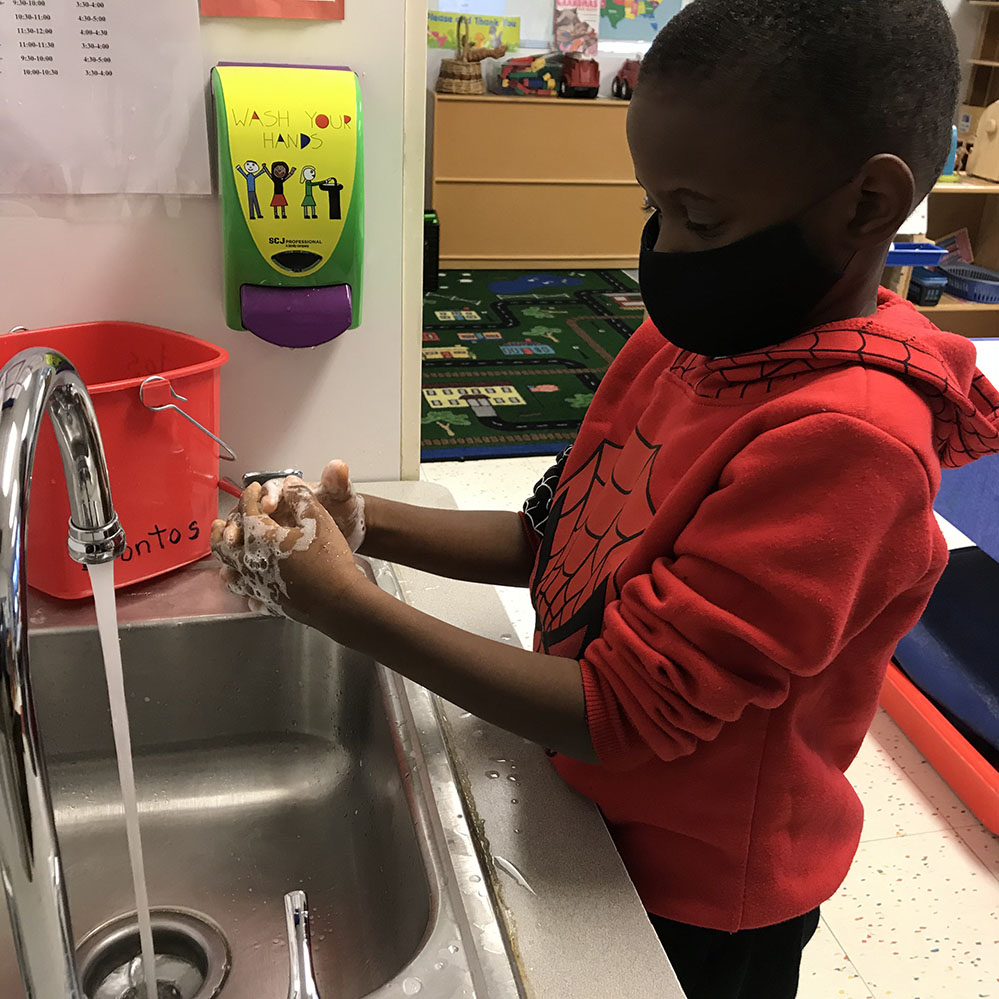 Devin Burge washes his hands when he arrives at preschool wearing his black mask. (Patrick O’Donnell)