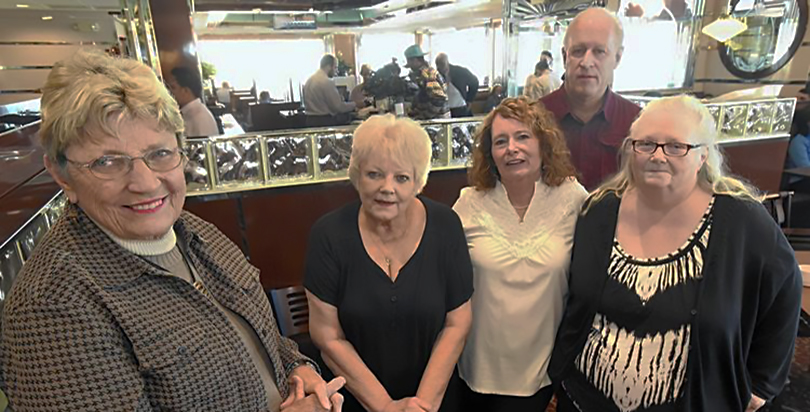 This article is one in a series at The 74 that profiles the heroes, victories, success stories and random acts of kindness to be found at schools all across America. Read more of our recent inspiring profiles at The74million.org/series/inspiring.
On a crisp fall day, during a bustling lunch hour, a group of women met at the Towson Diner to reminisce about times gone by. This was a special reunion, 60 years in the making, between three women and their first-grade teacher.
In 1955, Rita Hundley had just graduated from Maryland State Teachers College, now known as Towson University, and opened her first-grade classroom to brand-new elementary students. Kindergarten wasn’t offered back then at Towson Elementary School, which closed in 1976. So it fell upon Hundley to teach the new crop of students to read and write.
“They were my first,” Hundley, now 82, told The Baltimore Sun. “They were like my babies.”
Sixty years later, three classmates — Barbara Davis, Ellie Lewis and Johnette Benson, all 67 — found one another on Facebook. Together, they tracked down Hundley, which eventually led to the lunch at the diner.
They talked about chalkboards and dodgeball and holding class outside on a hot day — there was no air-conditioning at the school. And they remembered the lasting impact their first teacher had on their education and their lives.
“She taught us to read, which is the most precious gift you can get from anyone,” Lewis told the Sun.
Education is the Hundley family business, so to speak. She took up teaching the year her mother retired from the classroom, and three of her five children have become educators.
Hundley spent three years at Towson before taking a 12-year break to raise her children. Later, she taught at Hampton Elementary School in Timonium, Md., for 30 years.
If her former first-graders are any indication, Hundley made a lasting impact on hundreds of children.
Submit a Letter to the Editor
November 17, 2016