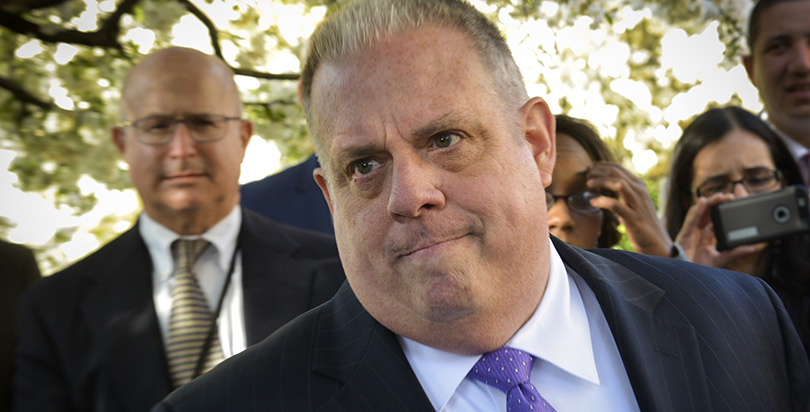 Updated April 7: In a swift response Thursday, the Maryland General Assembly voted to override Gov. Larry Hogan's veto of a bill limiting options for addressing low-performing schools. The legislation also sets requirements for the state's school accountability system, restricting academic achievement measures to 65 percent of a formula to identify struggling schools.
The legislation comes as education officials work to craft a state plan under the Every Student Succeeds Act, the new federal education law that replaced No Child Left Behind. The votes to push through the teachers union-backed legislation largely fell along party lines, with Democrats ultimately winning the upper hand against Hogan, his fellow Republicans, and education reform activists who argued the plan impedes the state's ability to fix failing schools. The bill's backers, however, say the change will protect schools from privatization promoted by President Donald Trump and Education Secretary Betsy DeVos.
Previous coverage below:
In the gymnasium of a Baltimore charter school Wednesday, Republican Gov. Larry Hogan vetoed legislation that he said would “directly threaten Maryland’s well-earned reputation as a national leader in education” by substantially restricting local education officials’ say in reforming low-performing schools under the new federal education law.

“This afternoon, I’m calling on the members of the legislature, on both sides of the aisle, to do the right thing for our kids,” Hogan said at the Baltimore Collegiate School for Boys. “Please, put aside the partisan politics and sustain this veto. Please don’t turn the clock back on all of the progress that we’ve made together for our kids. Every single one of our Maryland children who are trapped in these failing schools deserves better than this.”

Like all states, Maryland has been working to create a plan for complying with the new federal Every Student Succeeds Act, which gives states renewed authority over school accountability while requiring standardized testing and interventions in low-performing schools. But unlike many states, Maryland has seen a power struggle develop between the Republican governor and the Democratic-controlled legislature over who has final say over local control of the schools.

For months, the state Board of Education has been considering an ESSA plan that includes options for fixing the state’s low-performing schools, such as charter schools, vouchers, and even possibly a state-run “recovery school district” similar to the one created in New Orleans after Hurricane Katrina. The board is dominated by Hogan appointees and includes some noted education reform activists.

But last month, the General Assembly passed a bill banning education-reform-focused solutions for turning around low-performing schools, including charter school conversions, vouchers, and a “recovery” school district. The bill also would make academic achievement count for 65 percent of a school’s accountability measure — a number Hogan says is too low to fulfill federal requirements.

The measure passed with a veto-proof majority. Lawmakers have until Monday, when the legislative session ends, to override.

“This bill would actually prohibit the State Board of Education from finally taking any substantial actions to make any improvements to any failing schools,” Hogan said. “It prevents much-needed accountability in our school system, and it would make it much more difficult to identify the schools that are falling behind.”

Democratic Sen. Craig Zucker, who sponsored the legislation, said in a release the proposal was adopted to counter education reforms promoted by President Donald Trump and Education Secretary Betsy DeVos, who he said “want to privatize our schools.”

“Marylanders don’t want to see school privatization come to our state, and they want Gov. Hogan to protect our students and educators,” Zucker said. “This legislation does just that.”

The bill has support from the Maryland State Education Association, the NAACP Maryland State Conference, and the ACLU of Maryland, among others. Linda Darling-Hammond, a Stanford education professor and president of the Learning Policy Institute, praised the bill in a letter to lawmakers.

“While academic outcome indicators are important, it is equally important to include indicators of student and school conditions that predict outcomes, so that educators have information to use for diagnostic purposes and improvement decisions,” she wrote.

The state board, including two members who were appointed by the previous governor, Democrat Martin O’Malley, unanimously opposed the bill.

In a letter to lawmakers, the board said the legislation infringes on state education officials’ authority to set policy. “Even worse,” board member and education reformer Andy Smarick told The 74, “it devalues student achievement, dictates how the state reports school results to parents and communities, and limits instead of expands the state’s ability to help boys and girls in persistently underperforming schools.”

MarylandCAN, the local chapter of a national education reform advocacy group, reached a similar conclusion. “We cannot fix what we cannot see,” interim director Jenese Jones said in a statement. “This bill actively denies schools and teachers valuable data and insight by reducing the weight and importance of academic indicators in the accountability system.”

Although the union and legislators supporting the bill have tried to link Hogan’s education priorities to those of Trump and DeVos, opposition doesn’t clearly fall along political lines. The Education Trust, which focuses on equity in education and recently selected former education secretary John King as its president and CEO, was among those who called for a veto.
(74 interview: John King on his year as education secretary, the Trump administration, and his new role at the Education Trust)
Natasha Ushomirsky, director of K-12 policy development, said in a blog post on the group’s website that the bill emphasizes school quality indicators like class sizes and teacher caseload, which she said “aren’t focused on students at all.” The measure would require “opportunity for Advanced Placement courses and International Baccalaureate programs,” a requirement she said focuses on course offerings rather than actual student enrollment.
The bill comes at a time of political momentum for Maryland education reformers. Last year, lawmakers approved a $5 million private-school voucher program as part of the state’s $42 billion operating budget. Though the program started small — Hogan has since called for lawmakers to double its scope over the next few years — it was a surprising move for a Democratic-controlled legislature.
Even that small move has become a flash point. This school year, of the 2,400 students who received tuition assistance through the program, 1,900 were already enrolled in private schools — a fact that the union has used as political fodder. The program “merely subsidizes private schools with taxpayer dollars that could be going to public schools,” Sean Johnson, the Maryland State Education Association’s legislative director, told The Baltimore Sun.
During Wednesday’s event, Hogan argued that the legislation could put hundreds of millions of dollars in federal education funding in jeopardy by failing to emphasize academic measures in their accountability system.
But the union pointed to a comment from U.S. Sen. Lamar Alexander, the Republican co-author of ESSA, as assurance. During a keynote speech at an American Enterprise Institute event in Washington, Alexander said he understands Maryland education officials’ concerns about the legislators’ approach.
“But my goal with this law was to return that debate and that decision right there — to the Maryland state Assembly in Annapolis,” Alexander said. “They should decide how much test results should factor into their accountability system.”
Submit a Letter to the Editor
April 5, 2017