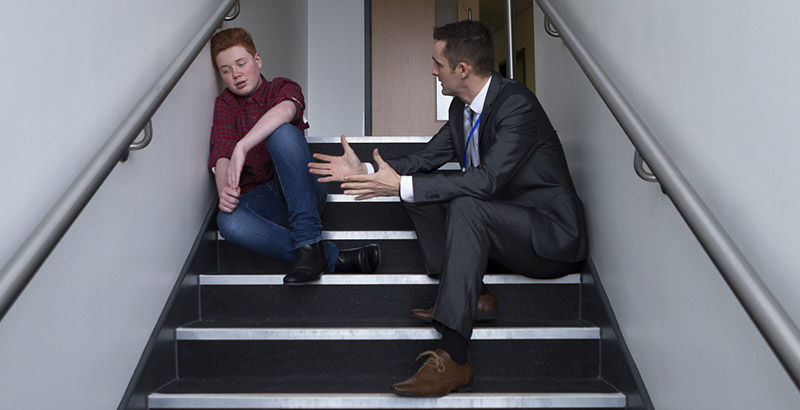 The first months of pandemic in 2020 saw an uptick in domestic violence, followed by a surge in gun violence that has not abated. As kids returned to K-12 classrooms, schools experienced a 300 percent jump in gun-related incidents compared with autumn 2019, along with increased reports of misbehavior from simple disruptiveness to threats and brawls.

Careful study is required to tease out the causes, but it seems clear that during this period of global upheaval, children have been marinating in the same toxic stress that affects their families and communities after being cut off from many of the social connections and services that help steady them in normal times. Such trauma, including violent victimization, is a major risk factor for adolescents committing violent offenses and becoming involved with the criminal justice system.

This week is National Youth Violence Prevention Week, which aims to raise awareness about the roots of youth violence and ways of stopping it before it starts. At LISC, a national community development nonprofit, I lead a team that works closely with residents and local organizations, including schools, to tackle the root causes of crime and promote safety. Our experience suggests it would be a tragic mistake to double down on zero-tolerance school discipline policies that rely heavily on suspension, expulsion and referrals to law enforcement.

Accountability is important, but without supportive interventions, the consequences tend to be punitive and push kids out of learning environments and into the criminal justice system — what is often termed the school-to-prison pipeline. One study showed that students in middle schools with strict discipline policies were more likely to drop out, less likely to go to college and more likely to end up being arrested and incarcerated than those in schools with less tendency to use suspension and expulsion. These policies typically have the harshest impact on children in low-income households and children of color, especially Black boys — kids from the very communities that have suffered most in the COVID-19 pandemic in terms of sickness, death, unemployment and small-business closures.

Instead, schools — the frontline organizations for child development — can be the starting place for forging relationships with community partners to meet the needs of individual children and help them navigate challenging environments without descending into a cycle of violence that’s likely to upend their young lives.

The most promising school-based interventions do two things. One, they enlist mentors or counselors who are relatable to the kids they serve, who look like them and have experience that allows them to speak credibly to specific children’s struggles and hopes. Two, they reach out into their communities in an all-hands-on-deck approach to a problem that educators cannot address alone.

The Spokane, Washington, school district, for example, hired a director of community relations and diversity training who has 17 years’ experience in the local juvenile court system and a deep understanding of how children of color in this majority-white city tend to experience disproportionately higher rates of school exclusions and arrests than their white peers. With help from a federal grant, Nicole Jenkins-Rosenkrantz and her colleagues created the RISE program, which connects individual students with community-based services they may need and has paired more than 130 kids with a relatable mentor who supports their journey in a close-up way. One mentor, 23-year-old Jerry Garcia, actually puzzles out solutions alongside his mentees in their algebra class, encouraging friendly competition over who can score highest on tests. “They just need a connection to someone,” he says.

Kids in RISE are building more positive relationships with administration and staff, sharply reducing the need for exclusionary punishments. Mentors have averted fights in real time — like one brewing recently in a school cafeteria, where a girl on the receiving end of some nasty insults was ready to fight her tormentor. Her friend ran for a RISE mentor, who rushed in to defuse the situation. Another Spokane teen, who had never achieved more than a 2.0 average, scored a 4.0 last semester and is accumulating credits toward graduation.

Several years ago, school administrators in Lompoc, California, became concerned about an increase in gang violence. They created the Lompoc Youth Violence Coalition, which includes the school district and various local service, health and faith-based organizations. The coalition holds regular community dialogues that, among other things, helped to identify specific street locations where safety is a concern. This information, coupled with training from the Community Based Public Safety Collective, is informing a Safe Passage initiative in which trusted adult “peacebuilders” will work to defuse conflicts and keep an eye out along kids’ routes to and from Lompoc schools. The group also inaugurated a class for the parents of sixth graders who, under the influence of local gangs, had been getting into trouble. The class, in the format of a peace circle that flattens power hierarchies and encourages sharing, promotes open collaboration between parents and schools to address individual problems and help children succeed.

In Florida’s Broward County Public Schools, the country’s sixth-largest district, there was an uptick in problematic student social-media posts — not just bullying, but outright threats. So the district is deploying its curriculum on internet safety, Think B4U Post, both in schools and in other community settings around the district.

All these interventions lie outside the traditional mission of teaching and depend on schools’ ability to engage community partners and sometimes hire “credible messengers” to intervene before fear, frustration and groupthink lead to violent outbursts and victimization. There’s strong evidence from longstanding programs like the Massachusetts Safe and Successful Youth Initiative and Cure Violence (formerly CeaseFire) that this grassroots-led, collaborative, non-punitive approach can reduce youth arrests for violent offenses and neighborhood gun violence.

Schools are a natural home for such interventions, but districts need dedicated resources and an engaged community to carry them out. With these programs, educators can send an important message to all kids, including those who may be at risk of hurting others and being hurt in turn: You belong right here with us, learning and growing, in peace and safety.