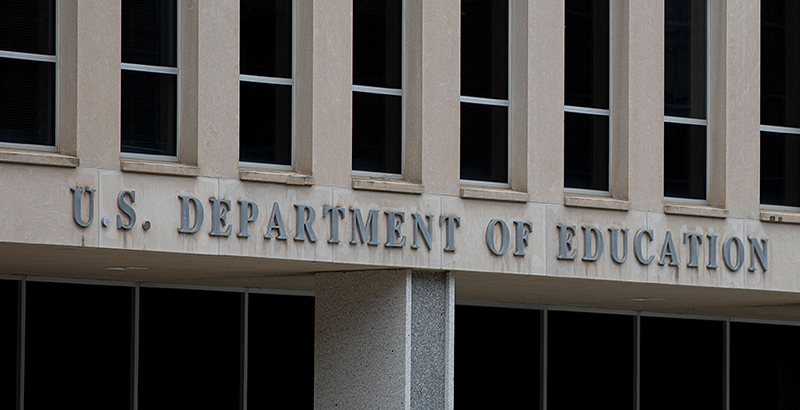 The U.S. Department of Education recently proposed changes to the 2019-20 Civil Rights Data Collection (CRDC), a biannual survey of all public schools and districts that the department’s Office for Civil Rights (OCR) uses to monitor civil rights issues. The CRDC has been at the heart of controversies over student discipline and chronic absenteeism and has been used by OCR for good and ill to push for changes in schools. The CRDC asks many questions, and OCR continuously balances the amount of school and district effort — or burden — required with the information’s importance, its value for civil rights enforcement and whether it is collected elsewhere. Maintaining that balance requires revisions to the CRDC that are routine, as well as politically charged.

Unfortunately, the department’s current proposals fall flat on balance, and some are particularly unwise. It’s worth evaluating each on the merits while they are open for public comment.

Citing a “ten-fold increase” in sexual violence cases between 2009 and 2018, OCR wants additional data collected about rape, attempted rape and sexual assault, along with incidents of religion-based harassment — including identifying the victim’s perceived faith according to 14 religious bias categories established by the FBI. These additions could provide valuable information, but they pose substantial additional burden because the data collection is new in kind rather than degree. Schools and districts may or may not have data systems that systematically capture assault, but few will have systems that capture the faith associated with religion-based harassment. That means schools will have to build out those data systems, and there are serious issues with the quality of the information they will capture.

Other proposed changes include dubious justifications for eliminating items to reduce the CRDC burden, including several that in the recent past have been central to informative research. Items on OCR’s chopping block include the disaggregated reporting — by race, sex and other civil-rights-related categories — of some data on Advanced Placement participation, preschool enrollment and preschool suspensions. The problem with these changes is that the reductions in burden that stem from no longer disaggregating data are minimal. Disaggregating subpopulations, which is central to detecting civil rights issues, is also relatively easy, because the extra work is typically in the reporting, not the gathering, of the data. For example, if preschool suspensions are still to be reported in total, as proposed, and schools already have data on student characteristics, the subsequent step of reporting disaggregated suspensions requires relatively little effort. In contrast, the added data elements the department is proposing are new kinds entirely and entail new gathering and reporting procedures. Without a clearer explanation from the department, reducing burden is not a convincing explanation for these proposed changes.

The department also wants to drop school-level finance data and the reporting of how many students participate in credit recovery programs, which allow students to make up for failed courses and graduate from high school on time. Where data is gathered elsewhere, like school-level finance data now required under ESSA, dropping items is clearly justified because it reduces burden without sacrificing information. However, when it comes to credit recovery data, the reverse is true. In fact, abandoning credit recovery may be the most egregious error proposed, both because CRDC is the only national source for data on these programs and because the federal government helped create the incentives for their abuse, and therefore the need to collect data on them is great. CRDC is the only national data collection that can examine the proliferation of these courses, which many observers fear are lowering expectations for graduates. What’s more, the emphasis that federal law put on raising graduation rates is part of the fuel pushing schools toward questionable credit recovery programs. As researchers Adam Tyner and Nicholas Munyan-Penney observed, “with pressure on school and district administrators to boost graduation rates while keeping costs low, the potential for educational chicanery is obvious.” Dropping this item, on which districts already collect data, will turn a blind eye to the chicanery for which the federal government set the stage.

The CRDC should include more data on credit recovery, not less. Participation certainly appears to be disproportional among minority students, groups that OCR should protect. Unfortunately, it’s hard to say for certain, because existing CRDC credit recovery data are not disaggregated by race, a minor additional burden beyond what districts have borne in the past. Adding a little burden to increase data reported on credit recovery would help researchers, states and the civil rights community keep an eye on questionable programs that have few guardrails. As CRDC is the only regular national data source on credit recovery, removing this item will remove these programs from view.

The CRDC provides information critical to identifying civil rights problems in America’s schools, and requires schools and districts to spend valuable time providing it. Balancing those total costs and benefits requires the government to make changes over time. It is important that every new proposal the department brings forward be evaluated on its own merits, because the reduction in burden differs item by item, as do the benefits that are gained or lost.

For several changes in this most recent proposal, the costs simply don’t line up. Fortunately, the comment period on these changes is open until Nov. 19. The department can still correct, or defend, these proposals for a strong CRDC.