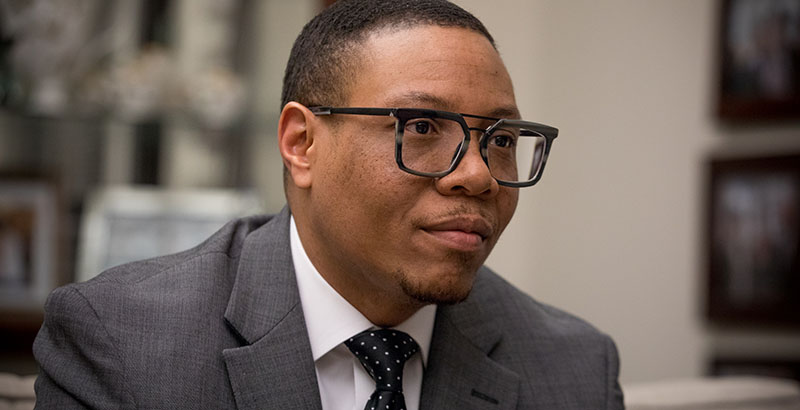 In introducing Lewis Ferebee as the next chancellor of District of Columbia Public Schools, Mayor Muriel Bowser rightly highlighted his “unwavering commitment to providing all students and families with high-quality educational opportunities.” That’s more than just a nice talking point. A commitment to truly equitable educational opportunity requires demonstrable empathy, deep policy expertise, the creativity to reimagine how we serve our most vulnerable students, and the political acumen to turn that vision into action. In short, to make good on the promise of equity in education, we need bold, transformational leaders. We need leaders like Lewis Ferebee.

Those of us who know Lewis, as I do through his work with Chiefs for Change, know him as a values-driven champion for kids, one who is unafraid to fight for difficult change if it means better outcomes for students. This has been a hallmark of Lewis’s career, from his time as a school principal through his most recent role as superintendent in Indianapolis, where he built one of the most sophisticated systems of equitable school access in the nation. As Lewis prepares to lead DCPS, it’s worth taking a look at some of his accomplishments that may provide a window into his thinking and how his leadership will benefit students in Washington, D.C.

One of the first things I learned about Lewis is that he believes there’s no reason why the best schools can’t be in the poorest neighborhoods, a belief that has animated his work throughout his career. As a principal, Lewis was instrumental in transforming elementary and secondary schools that had persistently low student achievement. Later, as a regional superintendent in Guilford County, North Carolina, he sought to oversee the lowest-performing schools, ultimately leading his cohort of schools to the largest increase in academic achievement among the five regions in the district.

But Lewis’s leadership goes well beyond the hard work of turning around individual schools. He thinks about how to take what’s working, make it better, and do so in a way that benefits a city’s most vulnerable children. Lewis has experience leading high-performing and choice programs as well. During his time in Guilford County, he led the state in the number of middle schools meeting No Child Left Behind Adequate Yearly Progress targets among the large urban school districts in North Carolina for two consecutive years. He also led the effort to reorganize central services supports in both Guilford and Durham counties, where he improved service delivery and resource allocation. These are significant, systemic enhancements, the kind that can have exponentially positive impacts on schools and students.

Perhaps none of Lewis’s achievements are as well known or as acclaimed as his work in Indianapolis, and for good reason. Indianapolis’s Innovation Network Schools have transformed that city’s public education landscape, improving school quality by putting the decision-making power in school leaders’ hands. Autonomous schools in Indianapolis have the flexibility to best determine how to reorganize and utilize resources to maximize student success. By focusing on school-level autonomy, Lewis helped IPS become agile and better able to respond to specific school needs, particularly the unique requirements of the lowest-performing schools. In fact, Innovation Network Schools have pathways explicitly reserved for district-run schools to enjoy increased autonomy, as charters do. IPS uses the Innovation Network Schools as a means to improve chronically underperforming schools, to reward high-performing schools with strong leadership and the organizational capacity to benefit from autonomy, and to start new schools.

Of course, providing real school choice for all families goes beyond creating and supporting great schools; it’s also about empowering families with the right information and support. In this regard, IPS has become a national model. Under Lewis’s leadership, in partnership with Enroll Indy, the district launched its School Finder, which provides clear, actionable information about all the city’s schools. He also spearheaded changes to enrollment rules to increase equity, by opening seats to students who previously would have landed on a waiting list because they do not live near their preferred choice school. This lottery is tied to the common enrollment process that allows families to fill out a single application for all schools, promoting equitable access by removing unnecessary obstacles to learning about and selecting their preferred educational options.

Now, Lewis will be the first to tell you that Indianapolis isn’t Washington. Transformational leadership isn’t about exporting a specific educational model from one city to the next, and he is prepared to spend time meeting with people in D.C. to find out what they think is working well and what could be better. As Bowser explained, her district’s new chancellor is the type of leader who “matches what our community wants and needs most.” He is a leader who wakes up every day thinking about how to better serve students and families, and who has the vision and the know-how to do just that. Indeed, Lewis is the right choice. I can think of no one better suited to lead D.C. Public Schools.

Mike Magee is CEO of Chiefs for Change, a bipartisan network of state and district education leaders.