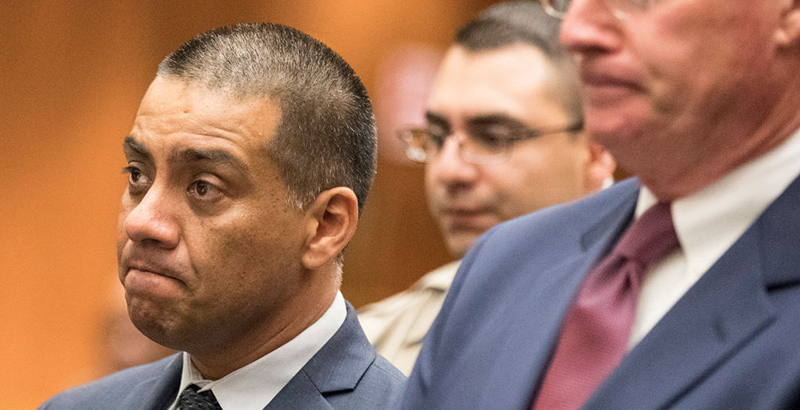 Early Monday, the embattled school board member pleaded guilty to a felony count of conspiracy and four misdemeanor counts for making campaign contributions in another person’s name. As part of a deal with prosecutors, he agreed to immediately resign from office. Rodriguez won’t serve any jail time but instead will serve three years’ probation and work 60 days of community service.

The departure leaves a hole on the seven-member school board that remaining board members will have to decide how to fill. Yet to be determined is who, if anyone, they will appoint to represent Rodriguez’s District 5 until voters can select the next permanent board member.

Rodriguez’s departure puts into question the power dynamics of the board that oversees the nation’s second-largest school district. In 2017, charter-school-backed board members won a majority on the board in the most expensive school board race in the nation’s history.

Here are three things to know about how we got here — and what happens next:

1 The Crime: What did Rodriguez do?

The case dates back to late 2014, at the beginning of Rodriguez’s run for the board. Rodriguez and Elizabeth Melendrez, a cousin and campaign volunteer, reimbursed 25 political contributions to Rodriguez’s campaign committee, according to a filing posted Friday by the city’s Ethics Commission. Both Rodriguez and Melendrez have now admitted that.

Donations to political candidates must be made in the name of the person who is the actual source of the contributions. Reimbursing political contributions constitutes money laundering and is illegal.

In January 2015, Rodriguez reported in his first campaign disclosure statement more than $51,000 from family, friends, and other people. However, nearly half of that money actually came from Rodriguez himself. Ironically, had Rodriguez reported the donations accurately, he wouldn’t necessarily have run afoul of the law. School board candidates are able to donate unlimited funds to their own campaign.

The plea deal Rodriguez reached with prosecutors will keep him out of jail but meant he could not keep his board seat.

“I am sorry for the mistakes I have made,” Rodriguez said in a statement Monday.

2 The Board: What does this mean for LA Unified?

The ousting of a pro-reform member could shift the power dynamics of the seven-person school board.

While Rodriguez’s departure could be seen as a loss for the charter school community, Katie Braude, executive director of parent advocacy organization Speak UP, said in an email Monday that the board members’ votes aren’t as predictable as many people believe, pointing to the fact that the remaining majority supports new LA Unified superintendent Austin Beutner.

“The first thing to note is that this framing, unions versus charter [schools], is adult-centered framing,” she said. “Our parents don’t think in those terms.”

Ben Austin, an LA Unified parent and a longtime education reform advocate in California, said, “What happened today is obviously not a positive development, but it’s a very isolated and specific fact pattern … not a sign of a systemic problem.”

He added, “This is a tough day for Ref and a tough day for the whole movement. But it’s worth noting that Ref is a good human being who cares about kids. He’s made some bad mistakes and is paying a heavy price for it.”

What is certain is that at least a portion of the board’s time will now be devoted to hashing out who will replace Rodriguez, whether the board will appoint a temporary board member, and when that election could happen. That could mean less time and attention spent on how to keep the district from falling off a fiscal cliff or how to best support the lowest-performing schools.

3 The Students: What does this mean for schools?

In a joint news release, school board president Mónica García and vice president Nick Melvoin offered assurances that the district Rodriguez represented will not be overlooked.

“While we would like to ensure no break in representation for District 5 by appointing a temporary voting representative as soon as possible, we would also like to call a special election to fill the vacancy as soon as we can. A board majority will have to agree to a plan,” the news release stated.

The board will have 60 days from the time it accepts Rodriguez’s resignation to decide whether it will hold a special election or appoint someone to serve the remaining term.

The next voting session of the board is Aug. 21. The next time the full board is scheduled to meet is Aug. 15 — the day after the start of the new school year — for a board retreat to discuss the district’s deteriorating finances.