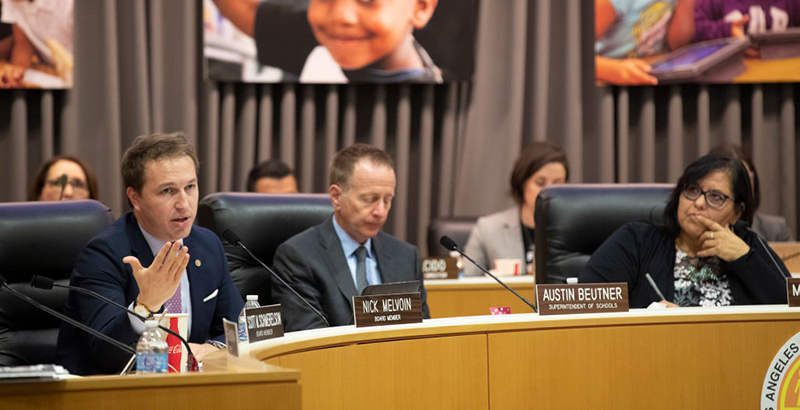 Updated Feb. 20: Board members voted down the resolution 4-2. Voting against it were George McKenna, Scott Schmerelson, Kelly Gonez and Richard Vladovic, who had co-sponsored the resolution.

The L.A. Unified school board will vote Tuesday on whether to get rid of a district policy that can force schools to hire “displaced” teachers — even if they aren’t good fits.

The resolution, brought by Nick Melvoin and co-sponsored by Richard Vladovic, states that “no teacher shall be employed at a school without the mutual agreement of the teacher and the school site decision-maker” starting in the 2019-20 school year. A resolution granting this freedom to about a quarter of L.A. Unified’s schools — those that are the lowest-performing and highest-need — passed unanimously last June. The new resolution would expand that freedom districtwide. To pass, it would need the approval of four of the six board members.

School sites can currently sidestep unwanted teacher placements in a few ways, such as applying for waivers or using long-term substitutes to fill vacancies. But there is a point at which the district can “place teachers anywhere” in the remaining three-quarters of L.A. Unified’s 1,000 schools, Melvoin said. Displaced teachers include those who were forced out of a school because they were bumped by a more senior employee, were deemed ineffective, or are returning from a leave of absence and have not yet been hired at a school site. “Must-place” refers to teachers who have been on that list for more than a year.

About 500 “must-place” teachers were assigned across L.A. Unified between 2015 and 2018, according to a Partnership for Los Angeles Schools report released last week.

“The practice of telling a teacher, ‘You’re going to this school because we need you,’ or telling the school, ‘You’re taking this teacher because we need you,’ will stop” if this resolution passes, Melvoin said Friday. He added, though, that “as we look at class size reduction and the [statewide] teacher shortage, there still might be unhappy arrangements. … Someone might be like, ‘Fine, this is the best job I can get,’ or ‘This is the best teacher I can get.’”

Read our latest policy paper, titled "Beneath the surface: Ensuring LA schools have equitable access to educators." Learn more about the need for #equitableteacherstaffing at #highneedschools across LA Unified and beyond. https://t.co/4Rp3u3zJzW pic.twitter.com/z4V0lNbJrm

New York City’s school district, which is more than twice the size of L.A. Unified, spent $150 million in salaries and benefits on its teacher pool in 2016.

Melvoin emphasized that the resolution is “not saying that these teachers get fired from the district,” which would require collective bargaining and state law changes. Rather, “this is just protecting the individual school site.” The district on Thursday confirmed there is “no new language about displaced teachers” in the recently approved teacher contract, and “no [Memorandum of Understanding] with UTLA regarding priority placement.”

As a former L.A. Unified teacher, Melvoin can attest to the frustration of feeling like a “cog in the machine.” It’s a feeling he hopes this resolution can begin to fix.

“My pursuit-of-happiness theory [is] that people are happier when they’re in jobs they want to be in, and happier people are usually more productive,” he said. “I think [teachers’] job satisfaction will increase. Their retention will increase. And they’ll be better teachers because they’ll be at a school that they want to be at.” An effective and supported teacher is widely seen as the most important factor in a child’s success in school. At least two independent studies of L.A. Unified, one local and one national, have called for eliminating teacher pools altogether.

The mutual-consent hiring policy is just one part of the solution, Melvoin added. He’d also like to see conversations continue on how to shrink the overall teacher pool and how to bolster district supports for educators. Under California law, L.A. Unified can’t fire tenured teachers it can’t find positions for, so it has to continue paying them for as long as they’re in the pool. There is no time limit in L.A. Unified for how long educators can remain on the displaced list.

A district spokeswoman outlined some of the district’s current efforts, apart from trying to match displaced teachers to schools, in an email:

● Assigning displaced teachers as first substitutes of the day, giving them an opportunity to showcase their teaching skills.

● Continuing to provide guidance, assistance, and support to displaced teachers through the evaluation process.

The resolution could be “a forcing mechanism” that puts more onus on district administration to figure out why placement efforts fail, Melvoin said.

“If a teacher can’t get a placement after a year or after 15 job interviews, then we really need to work with that individual to make sure they’re getting the skills they need, they’re getting the training, [maybe] they need a new credential,” he said. “Or, in some rare cases, we need to just say, ‘Hey, this isn’t the right fit for you at the district.’”

Teacher quality is considered one of the leading contributors to student success. And it’s what parents want, according to a new survey released last Wednesday at a forum for candidates running for the vacant school board seat in Board District 5.

The survey, from the L.A. advocacy group Alliance for a Better Community, which co-sponsored the candidate forum, showed that 86 percent of respondents said teaching quality was their top education priority. “Safe and welcoming schools” also tied for first place. The organization collected 452 surveys and conducted focus groups with 75 constituents in Board District 5 from December through this month.

Teacher quality is especially pertinent for disadvantaged students and those in minority groups. That’s why the school board last June approved a resolution granting L.A. Unified’s lowest-performing and highest-needs schools “responsible flexibility in hiring” and exemption from hiring teachers “who were displaced one year or more.” The policy change came in the form of an amendment to the “Close the Gap by 2023” initiative, which calls for all district graduates to meet eligibility requirements for the state’s four-year universities by 2023.

The change is necessary when considering that high-needs schools “struggle to compete” with their more affluent and high-performing peers for the more desirable teachers in the pool, Partnership for Los Angeles Schools wrote in its “Beneath the Surface” report. “Schools which have superior facilities, better reputations, and student populations with fewer challenges tend to fill their vacancies very quickly,” the report states. 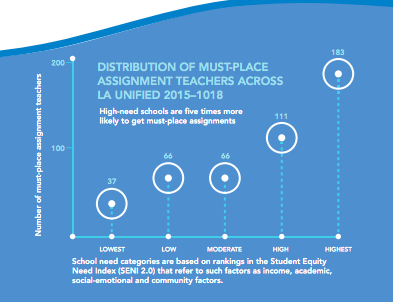 Number of “must-place” assignments between 2015 and 2018 based on level of school need. The highest-need schools, as seen above, received the most “must-place” teacher assignments. (Partnership for Los Angeles Schools)

“In addition to the mutual consent, part of what I want to get at is, let’s let some of those high-needs schools get preference and open up their hiring a month earlier than low-needs schools,” he said. “Maybe people looking for jobs would be more tempted to go [there].”

For the general student population, research also shows that forcing teachers on schools, or vice versa, is often a lose-lose for all parties involved.

For one, it contributes to high teacher turnover rates, creating an unstable learning environment for students. Only 40 percent of teachers mandatorily assigned to a district school in 2015-16 stayed for a year or more, according to the Partnership’s report. “When the school and teacher do not choose each other, there is less likely to be an aligned vision or a shared set of expectations about what teaching and learning will look like in the teacher’s classroom. This is a critical aspect of a school’s normal teacher selection process,” the report states.

United Teachers Los Angeles, the local teachers union, did not respond to a request for comment.

Current policy also means that a school could be hiring a teacher that doesn’t meet the needs of its students.

Three-quarters of Los Angeles principals surveyed by the National Council on Teacher Quality, a research and policy group focused on teacher effectiveness, said they were unable to hire their teacher of choice because they needed to hire from the teacher pool. The same 75 percent of school leaders said that teachers on the must-place list are rarely if ever a good fit for their school. The survey was partially funded by the Bill & Melinda Gates Foundation.

“I teach high school, but my principal taught elementary school, so she didn’t have any idea about my work or subject areas,” a district teacher told NCTQ for its report.

Of the benefits the resolution could bring, “the most serious consequence of this will potentially be the cost,” Melvoin noted. And that could “force a conversation of state law changes and also how are we supporting these teachers.”

But even still, he said, “I would rather stomach some of the costs than have these teachers in schools where they don’t want to be, and where the principal doesn’t want them.”

Disclosure: The Bill & Melinda Gates Foundation provides financial support to the National Council on Teacher Quality and to The 74.