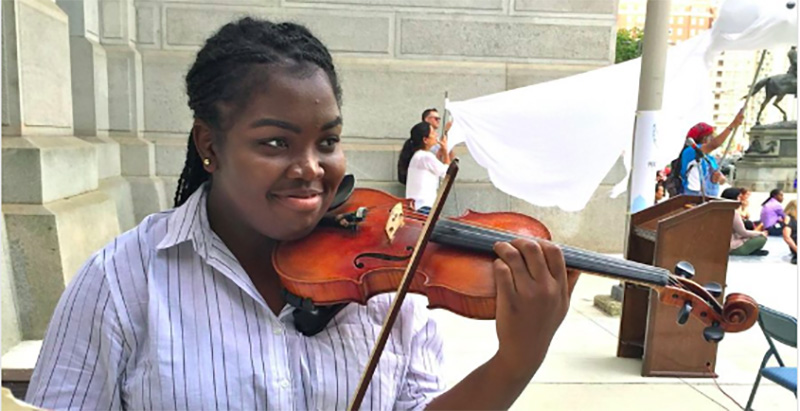 Teen violin prodigy Akili Farrow from South Philly believes nothing is out of reach.

A recent graduate of the Philadelphia Performing Arts: A String Theory Charter School, she has played in concerts around the city, appeared on film, met giants of the music world, and been a finalist in a citywide classical music competition. And Thursday night, she will perform at Carnegie Hall with the National Youth Orchestra in a concert led by legendary conductor Michael Tilson Thomas.

But Farrow knows she hasn’t done it alone.

Congratulations to PYO violinist, Akili Farrow, for being featured in this wonderful article from The Philadelphia…

“I’m extremely grateful for all of the programs that I’ve been in, including Primavera Fund, Musicopia, Philadelphia Sinfonia, and All City Fellowship,” she told The Philadelphia Tribune. “All of those programs have helped me become the musician and person I am today. I couldn’t have done any of this without them, as well as all of the people who have helped me along the way.”

This fall, Farrow heads to the world-renowned Royal College of Music in London, another longtime dream, where she will major in violin performance.

PYO violinist, Akili Farrow, was featured on CBS Philly today and we couldn't be more proud of her!Watch the full…

In an interview with CBS News, Farrow remembered her mom and cousin joking about her childhood plan to one day move to London. “They were like, ‘Oh, that’s crazy,’ ” she said.

Not anymore. But first, Farrow has a busy summer ahead. Having played in concerts throughout her hometown as a member of the Philadelphia Youth Orchestra and Philadelphia’s All City Orchestra, Farrow will tour with the National Youth Orchestra, visiting Taipei, Taiwan; the Chinese cities of Shanghai and Beijing; and Seoul and Daejeon in South Korea, cultures she’s excited to learn about.

Farrow grew up surrounded by music, thanks to her Caribbean immigrant parents, and got her first taste for performing as a youngster, donning costumes and dancing onstage at Carnival during family visits back to Trinidad and Tobago.

After starting piano as a third-grader, Farrow got her big break in fifth grade, when she took up the violin through Play On, Philly!, an intensive, tuition-free music education program offered at her middle school.

“As soon as I started playing the violin, I wanted to play more,” she told CBS News.

As she continued to excel, her opportunities multiplied. Among many other feats, the teenager was a classical music finalist in PHL Live Center Stage in 2016, appeared in the film Crescendo! The Power of Music, and has rubbed shoulders with luminaries including Wynton Marsalis and Itzhak Perlman.

And despite a regimen of practicing two to three hours a day, Farrow also makes time to pursue another passion — photography. She took a class at her school, whose students, along with her family and friends, serve as subjects for her candid pictures.

“I love photography and playing the violin. Both are a reflection of who I am as a person,” she told the Tribune.

As she gears up to continue her studies across the pond, Farrow has found her latest inspiration in Sheku Kanneh-Mason, the young black cellist whose performance at the royal wedding of Prince Harry and Meghan Markle wowed the world. Classical music talent, Farrow told CBS, is “something that’s not really shown in the African-American community.”

Her long-term plan is to end up where she started, in the place that nurtured her tremendous talent. Her ultimate goal is to join the Philadelphia Orchestra.

And her advice is simple, if not easy. “Don’t shy away from something that seems so impossible to achieve,” Farrow told CBS. “Because, honestly, anything’s possible in this world.”