Support The 74 and stories like this one. Donate Today!
News
School Choice 2016

Learning to Laugh in Hebrew: How Two Schools Used An Ancient Language to Achieve Integration

The Seventy Four marks School Choice Week (Jan. 24-30) with a series of stories celebrating educational options and innovation. Read our coverage here.
(Brooklyn, New York) — On a November morning at Hebrew Language Academy, a public charter school in Brooklyn, a 5-year-old girl led a dozen kindergarten classmates in a “Simon says”-like game, telling them in Hebrew to touch various articles of clothing.
“Yadayim al ha chatzait,” the girl said at one point. “Put your hands on your skirt.”
“I don’t have one!” a little boy blurted out, also in Hebrew, to giggles all around.
“They can laugh in the language,” the school’s director of Hebrew instruction, Arleen Danon, pointed out to a visitor. “That’s big.”
Just three months before, Danon proudly noted, most of those children had not spoken a word of Hebrew.
Making the scene even more remarkable was something else: Both the girl leading the game and the boy without a skirt were African-American — as were several of their classmates. It turns out that the language of the Torah, in combination with school choice, can be a force for racial integration.
The academy’s overall enrollment, in fact, is 41 percent black, 53 percent white and 3 percent Latino, a far cry from the all-Jewish enclave that some skeptics foresaw when the school opened seven years ago.
Its three-year-old sister school, Harlem Hebrew Language Academy is even more racially mixed at 42 percent black, 38 percent white and 20 percent Latino.
Both stand out as islands of integration in the New York City public school system, which a UCLA study identified two years ago as one of the most racially and economically divided in the country.
Their diversity is no accident, according to Jonathan Rosenberg, president of the Hebrew Charter School Center,the parent organization of the two New York City schools and seven others around the country. 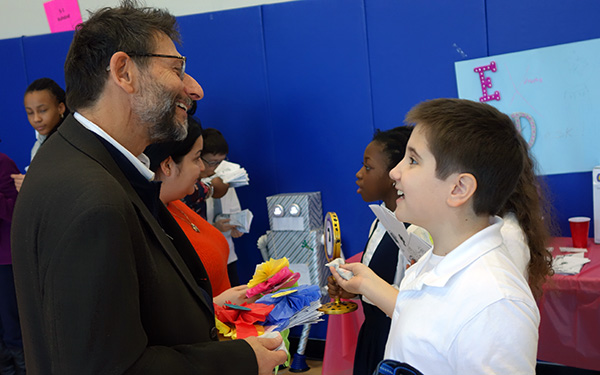 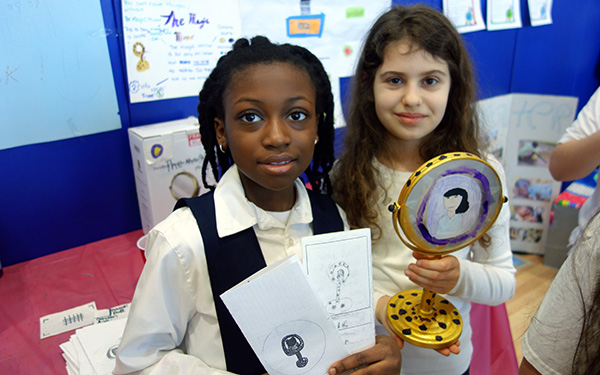 Students at the Hebrew Language Academy
Academically, Hebrew Language Academy has had its struggles. It received an “F” on its report card from the New York City Department of Education in 2013, its fourth year of operation. City officials said the school’s test results were above average, but had not shown enough improvement from year to year.
The test scores have since strengthened. Today, under revised standards implemented by de Blasio’s administration, the school is rated “good” or “excellent” in all categories, including academic performance.
For the 2014-15 school year, 42 percent of its students passed their state English tests, and 64 percent passed in math, substantially beating the averages for District 22 and the city as a whole.
On the waterfront
The academy occupies a waterfront building in an otherwise industrial section of Mill Basin. The renovated warehouse is roomy and pleasant and still has a slight smell of fresh paint.
As Penberg, the principal, led a visitor on a tour, a student greeted him with “Hi, Dr. P!” and asked when they could have lunch. “I let the kids have lunch with me,” he said afterward. “They can sit at the table where the adults sit. … It’s better than locking yourself in an office and being the place where folks go for discipline.”
Under the school’s immersive approach to language instruction, students receive a period of formal Hebrew lessons each day, and several of their other classes are conducted in both English and Hebrew, with one teacher speaking each. Hebrew instructors also preside at meals.
During one language lesson, students clustered on the floor in semicircles around instructors who led them in speaking, reading and writing exercises, using nothing but Hebrew. Rather than simply asking students to call out the name of an object or conjugate a verb, they wove words and concepts into a flowing dialogue with students.
“We’re imitating the process of first language acquisition,” said Danon, the Hebrew instruction director. “We don’t want to say, ‘What is this? This is a pencil.’ Rather: ‘Pick up the blue pencil.’”
Often, the teachers use worksheets and other materials they have designed and made themselves, because most of the commercially available Hebrew-language materials have too much religious content to be appropriate in a public school.
Whether playing games or doing exercises, the students appeared thoroughly engaged to the point that they scarcely seemed to notice adult visitors coming in and out of their classroom. Nor was a word of English heard.
Like most charter schools, Hebrew Language Academy relied heavily on philanthropic support at the start. Now in its seventh year, the school operates almost entirely on government funding, primarily the $13,877 per pupil it receives from the city under the state charter school law. Berman said that amounts to 70 percent to 80 percent of the per-pupil funding for nearby district schools.
Asked how she affords the extra staffing needed for Hebrew instruction, Berman answered: “I would flip it on its head and say that the district schools need to do the explaining as to what they’re doing with the money.”
Culture clash, not really
Her academies are not alone in harnessing the flexibility of charter schools to promote racial integration. The National Coalition of Diverse Charter Schools, founded in 2014, has dozens of members in 12 states and the District of Columbia. Rosenberg, the president of the Hebrew Charter School Center, is a founding member of the coalition’s board.
Another member, Century Foundation fellow Halley Potter, noted that the first proponent of charter schools — the United Federation of Teachers founding president, Albert Shanker — had meant for them to be teacher-run and draw students from across a region instead of a single district. “In that original idea, student diversity was built in,” she said.
Charter leaders later drifted from Shanker’s vision — leading him to repudiate the movement — but Potter said she welcomes the renewed focus on diversity.
“It has been an exciting year for school integration issues,” Potter said. “There has been so much more conversation over the last year than there has been for many years prior to that.”
Standing in the way of more progress for diversity-oriented charter schools, Rosenberg warned, is a state law mandating that charter enrollments closely match the economic makeup of their home school districts. That rule effectively bars charters based in poor districts from trying to bring in wealthier white families. Rosenberg said the law is well-meaning, but should be made more flexible.
The value of the dual-language approach used by Hebrew Language Academy and other culturally themed schools was confirmed by a recent study out of Portland, Ore. The study by RAND Corporation and the American Councils for International Study found that students randomly assigned to dual-language programs gained an extra nine months’ worth of reading ability by eighth grade.
Harder to quantify are the long-term benefits of learning and socializing with kids of different races and classes.
“What’s amazing to me is how little culture clash there is and how wonderfully normal and conflict-free the schools are,” Berman said. “It just gives you the greatest sense of optimism and hope that children really are color-blind and, if put into the right environment, are so excited to learn about each other’s culture and backgrounds.”
Berman recalled an African-American student at Hebrew Language Academy whose family home was destroyed in a fire.
“The city was going to provide housing so far away that the child was no longer going to be able to attend HLA,” she said. But then a white family from the school with access to an empty apartment offered it to the family who had lost theirs.
“As I tell this story years later, I have the chills,” Berman said. “Because those are relationships that wouldn’t have been built otherwise.”