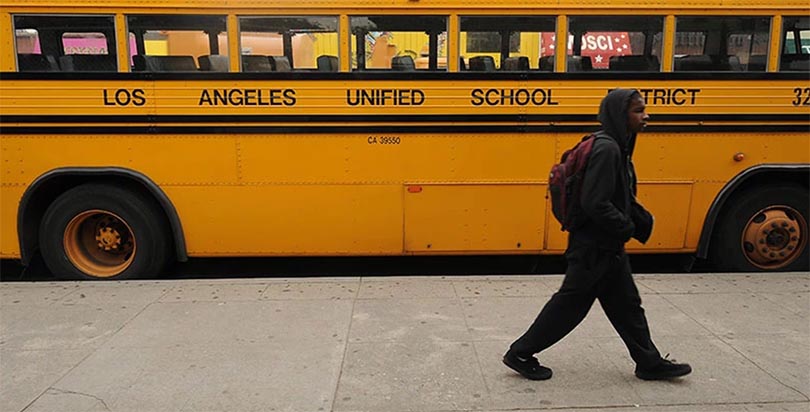 This piece was produced in partnership with LA School Report; see LASR’s recent coverage of the 2017 school board race.
After passionate debate and pleas from both charter school administrators and parents, the Los Angeles Unified school board voted 4–3 Tuesday night to support three teachers union–backed bills being considered by the California legislature that all restrict some of the autonomies given to public charter schools.

The most contested bill, SB 808, was pulled by its author late Monday night and put on a two-year timetable for further discussion. It seeks to prevent charter schools from being able to appeal local school district decisions to the county or state boards of education, and it allows a school district to deny a charter if it could be considered a financial hardship on the district.

But despite the bill being tabled, the school board still voted today to support it with both words and money, directing Superintendent Michelle King to spend LA Unified’s “advocacy resources” lobbying for it.

The lengthy debate brought into stark relief the political divisions on the board, as all four board members who supported SB 808 had been backed by teachers unions in their elections. Both United Teachers Los Angeles and the California Federation of Teachers are actively pushing SB 808, and UTLA’s president, Alex Caputo-Pearl, argued for it before the board Tuesday.

The discussion also highlighted board members’ allegiances, as they spoke either in favor of the district — defending its finances and stability — or in favor of parents’ ability to choose the best schools for their children.

“If it’s about financial hardship, we should just shut them all now, because all of them would be,” said board member Mónica Ratliff, arguing against the proposition. She also made an unsuccessful attempt to amend the resolution to delete all references to SB 808. Reading from the bill, Ratliff noted, “The school district can deny the petition and there is no recourse because that has been taken out. I have a problem with that, because then we say every single charter school would impose a hardship.”

School board vice president George McKenna said, “It is a fact that the loss of enrollment is a hardship on this district. There are those who unashamedly, unabashedly said their intent is to take 50 percent of our students and they are competing against us.”

McKenna said he believes he is protecting the district and the employees of the second-largest school district in the country. “The charter schools say all students are welcome, but not all students are recruited, and I’ve seen who they go after first. I do believe the district has an obligation to protect the financial stability, and that is the only way to stay out of receivership.”

McKenna said he is worried about the district’s financial stability. “We will be economically insolvent if in fact we continue to allow and help others come in to get students and come into our space.”

The vote was 4–3 in favor of the district supporting the three state bills and lobbying for them. All four board members who voted for the resolution — McKenna, co-author Scott Schmerelson, Richard Vladovic, and board president Steve Zimmer — have received teachers union support in their elections. Ratliff, who is leaving the board in June, voted against the proposition, along with charter supporters Mónica García and Ref Rodriguez.

“I do want to say, for me, the issue is around due process,” Rodriguez said. He pointed out that the bill is going to be discussed for the next two years in committee and could come out very differently.

García said, “Kids of color and kids of poverty have depended on us for 160 years and we have not come through for them. When I think of the charter movement, at the beginning we asked them to come to parts of the district that were overcrowded. L.A. is leading the way in urban reform, and these pieces of legislation don’t inspire me.”

The discussion among the board members turned toward what they felt their obligations were on the board. Ratliff said, “I think my responsibility is first and foremost to the students and then to the district. But now we are saying we are going to eliminate schools.”

McKenna asked Ratliff how many students she thought the district should lose. “Charter schools say they’re better than we are and that’s why they are leaving our schools and it’s an abomination. I’m not fighting charter schools, but we should have a responsibility and ultimate authority of who is in our house.”

Pro-charter parents met last Friday with SB 808’s author, state Sen. Tony Mendoza, and declared victory when he tabled the bill Monday, saying they believed they swayed him. Sarah Angel, managing director of regional advocacy for the California Charter Schools Association, said, “We were thrilled that Senator Mendoza met with charter parents and heard their concerns.”

But Angel said she was disappointed about the school board vote. “I am surprised that the board put the needs of the district ahead of the needs of the students. They made a completely political decision.”

Tuesday’s vote came four weeks before the May 16 school board runoff, and board members noted that depending on the election’s outcome, next year’s board might have voted differently on the resolution.

One of the candidates seeking to fill Ratliff’s seat, Kelly Gonez, who teaches at a charter middle school in South Los Angeles, said she would not have supported the resolution and she regretted the board’s vote.

“I firmly believe that we must have comprehensive and meaningful accountability for all charter schools and we must ensure that they serve all students, but I oppose this legislative package as currently written,” Gonez said in an email. “I would urge the California legislature to work with all interested parties on ways to advance the goals of accountability and inclusion of charters without hindering the ability of high-quality, effective charter schools to operate.”

Nick Melvoin, Zimmer’s opponent in the District 4 runoff, called the resolution disappointing and said in an email it will further divide the community.

“It’s also a politically motivated one — especially right before the election — and it’s unfortunate that Steve would put politics before kids. This is not an all kids resolution; rather, it stokes the flames of this ‘us vs. them’ rhetoric. Given the assault on public education from the Trump Administration, we need leaders who stand with all public school families. This resolution directs LAUSD’s lobbyists to spend less time securing necessary funding for teachers, the arts, and other basic services and more time wagging political fights.”

“Eliminating charter school appeal rights on the substance of a petition or renewal violates the core concept of due process relied upon to overcome hostile bureaucrats and school boards who see California public school children as an ATM machine,” EdVoice President Bill Lucia wrote. “SB 808 leaves local education communities with no recourse but to clog superior courts when hostile school districts blatantly ignore the law in rejection of high-quality public school options being provided by charter public school teachers in a setting chosen by parents as the best fit for their child.”