Living in Seattle, we were the epicenter of not only the first coronavirus hotspot in the United States, but the first school closures. As an education researcher and longtime observer of school systems, I could not have predicted the speed or scope of the educational crisis we were about to face, but one year ago, in the course of the week from March 2 to 11, I was watching in horror as the virus rampaged through our community, which was home to the first American university and school district that closed in response.

After a few days, I knew we were about to face something big. I knew we were totally unprepared. And I knew the most vulnerable students would suffer the most.

One year later, I went back into my Twitter feed to document those first 10 days.

The last weekend in February, I had just arrived home from a work trip to Miami, my last business trip. In response to the growing concern that schools might need to close for a few days due to the coronavirus cases in northwest Washington State, I shared a thought: my kids schools had been doing “virtual snow days,” and I thought their method, doing live teaching in short increments combined with asynchronous work time, might come in handy.

Over the weekend, the virus outbreak was growing more serious. I was in Kirkland, a suburb of Seattle, celebrating my sister’s birthday when news broke of the outbreak at the Kirkland Life Center. We’d all been telling ourselves the virus could be contained, but that was looking less likely. That Monday, March 2, I told my staff to avoid public transit and stay home if they felt safer there. I was watching the data and worrying about what was ahead while the rest of the country carried on, largely oblivious.

This is getting alarming… https://t.co/7ni0ZB8hSY 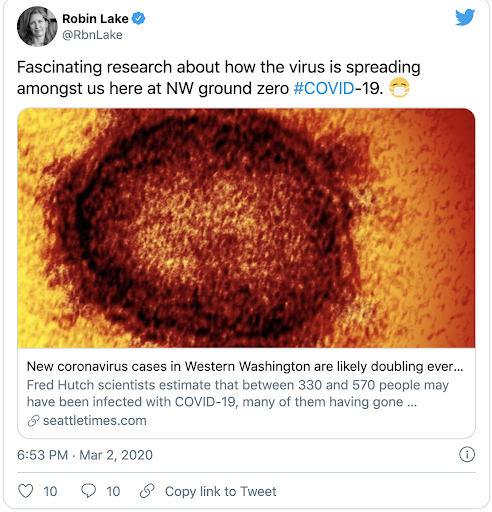 Over the course of the next couple of days, it became clear that the virus was already everywhere in the Seattle area. The Seattle Times posted a live feed of new cases, and I was tracking it almost hourly. We knew this was getting serious, but it still seemed temporary and manageable and I still had a sense of humor about me. On March 4 I wrote this. Little did I know the bars would soon close. For a year. 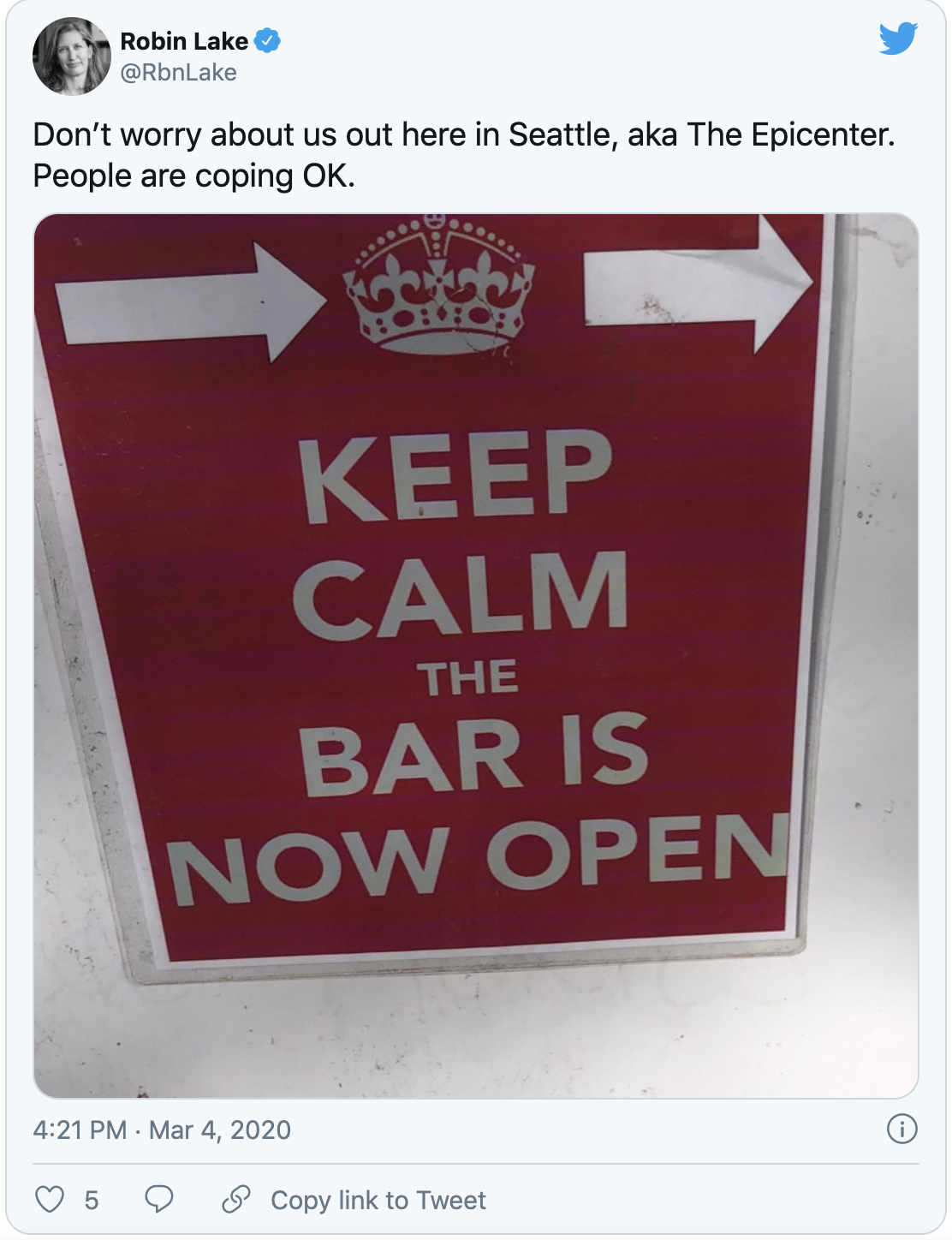 It was, however, dawning on me that schools were completely unprepared to close, should they need to. Even if the health conditions didn’t necessitate it (we had little idea at that point whether closing schools would significantly stop the spread), it was clear that families and teachers were making the decision on their own. On March 4, my colleague Ashley Jochim reported that half of her child’s school was absent that week due to COVID fears. I wrote: “The time is now for flexible pathways!”

The next day, the Northshore School District, north of Seattle, closed for two weeks, in part because teachers were refusing to come to work. At this point, I suspected we were about to see a domino effect.

Other countries were ahead of us, and I knew we had to look to them for guidance. I started reaching out to friends who were teaching overseas and following international teacher Facebook pages. I saw innovation already underway as educators worked in real time to share tips and strategies.

By Thursday March 6, the University of Washington became the first higher education institution in the U.S. to close in response to the growing pandemic, and Seattle civic services, libraries and animal shelters were closing down. It felt extreme at the time. I wondered if we were overreacting but knew that either way, we needed to prepare for the worst. I was horrified to see, however, that the major school districts in the Puget Sound region did not seem to be preparing for the possibility of going remote. The rationale was that it would not be equitable to move to remote instruction because not every child had a computer and Wi-Fi at home.

Of course, this was true, but I knew we had to act to change that. I also knew that low-income students were more likely to be living with elders in their homes. There were equity issues either way, but the truth was, teachers unions did not want to move to remote instruction, possibly out of longstanding (if misplaced) fear that teachers would be replaced by technology.

This was the first glimpse I had of the politics of closure. Equity was used as the reason not to close. A year later, it’s the reason some give to keep schools closed.

I jumped into the fray with this thread, urging innovation and action: 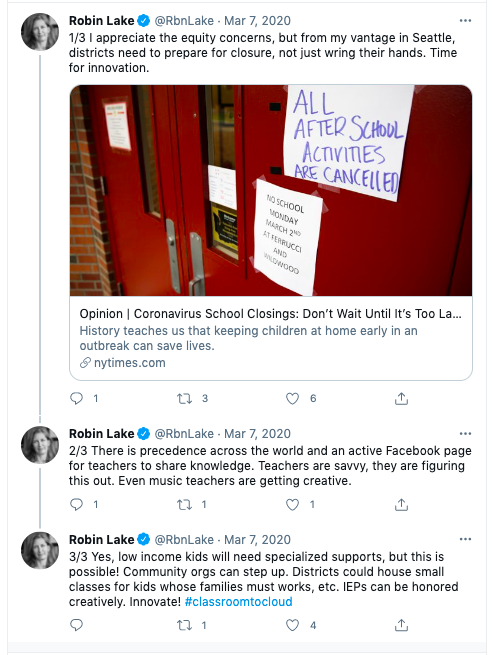 I submitted an op-ed to the Seattle Times urging school districts to prepare to educate all kids at home if they must and not hide behind equity language. It was rejected there, but The 74 ran it.

By Sunday, March 8, my kids’ private school closed for two weeks. National observers were fiercely debating school closures, and the vitriol of Twitter seemed absurd to me. For me, the debate no longer felt abstract. Ambulance sirens and medevac helicopter blades echoed through our neighborhood. People were discussing the possibility of a two-week citywide lockdown. This was no “bad flu.” My patience was wearing thin. In response to a national journalist who was concerned about kids getting too much screen time if schools closed, I said, “We’re watching in horror as our elderly die here. That reality will be everywhere if we don’t slow this thing. It’s not a game.”

Lake: As Coronavirus Forces Schools to Go Virtual, We Must Innovate — and Embrace Learning As We Go. How 1 Washington District at the Epicenter Is Doing Just That

That weekend, I spoke to Michelle Reid, superintendent of Northshore Schools, the first district to close and go virtual. Reid was kind enough to explain how they’d been prepared for weeks to go remote and why they made the decision. Her quote below was so powerful when we had no idea how to keep people safe. Now we know.

Yesterday I asked Superintendent Reid of Northshore SD how they'll support their most vulnerable students. Response: "The most important thing we’re doing for them is making sure they are not in buildings with #COVID19." #classroomtocloud

Reid’s crisis response seemed critical to document and share, as I did in my tweets and then later in an article. This was when I realized that someone would need to take on this task and move knowledge at warp speed. We jumped in. 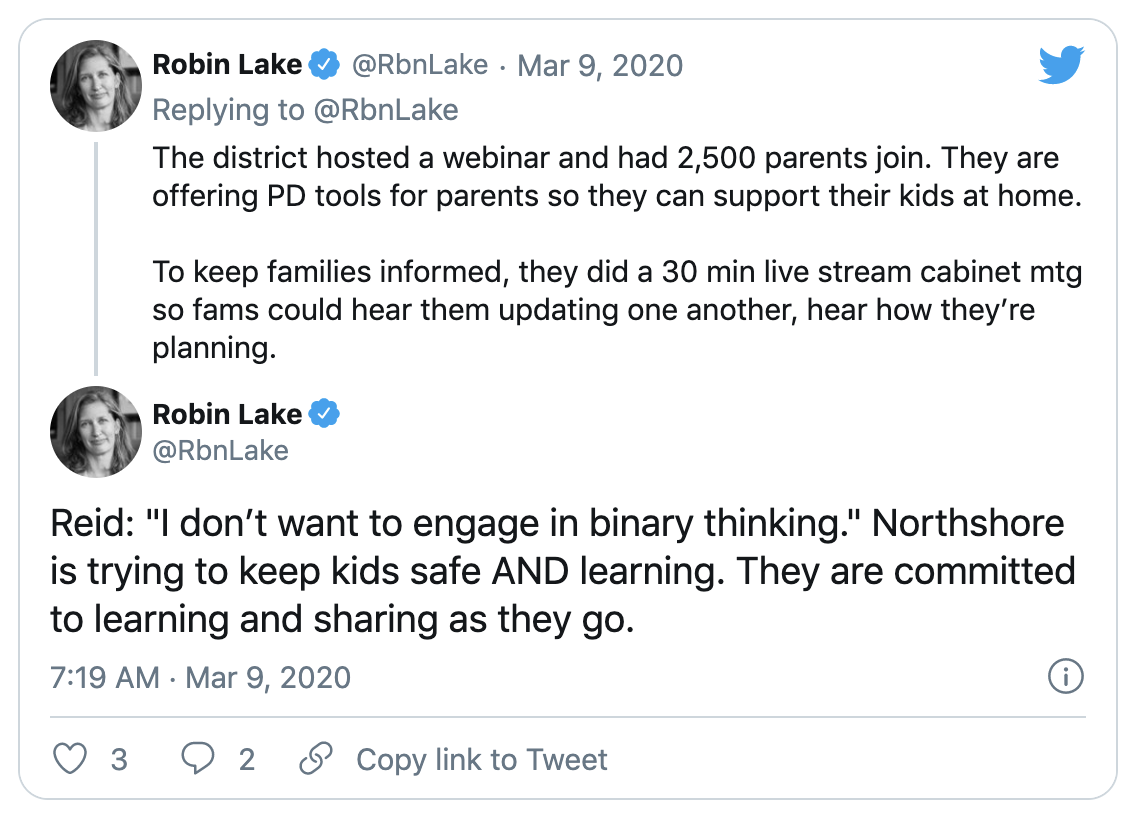 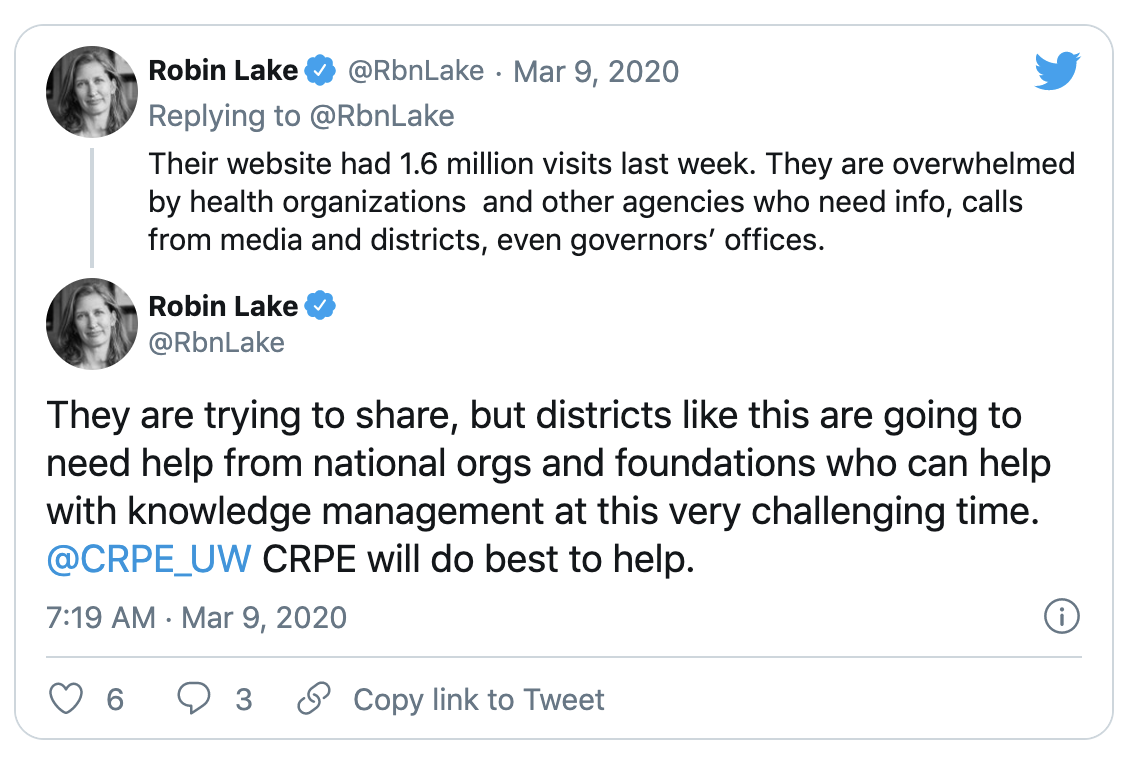 The start of the next work week was chaos. By then, we had fully closed our offices, but school districts in the Puget Sound region were pressing on, continuing to hold classes. Tacoma Public Schools closed for a day after they had a case in a school.

I proposed that rather than stay open and put lives at risk, large districts might send home kids who could work online and keep only the most vulnerable at school, spaced apart in hygienic classrooms.

The backlash to my idea was swift and somewhat vicious. Local and state officials continued to insist that virtual learning would be inequitable and of low quality. I wondered why everyone was suddenly so concerned about inequity in a state with one of the largest opportunity gaps in the country. I wondered why no one was willing to try to both keep students safe and keep them learning. I wondered why we were not marshaling every possible resource to innovate. I rejected the binary thinking. I believed we had to somehow keep kids learning while they were at home, even if it was just for two weeks. 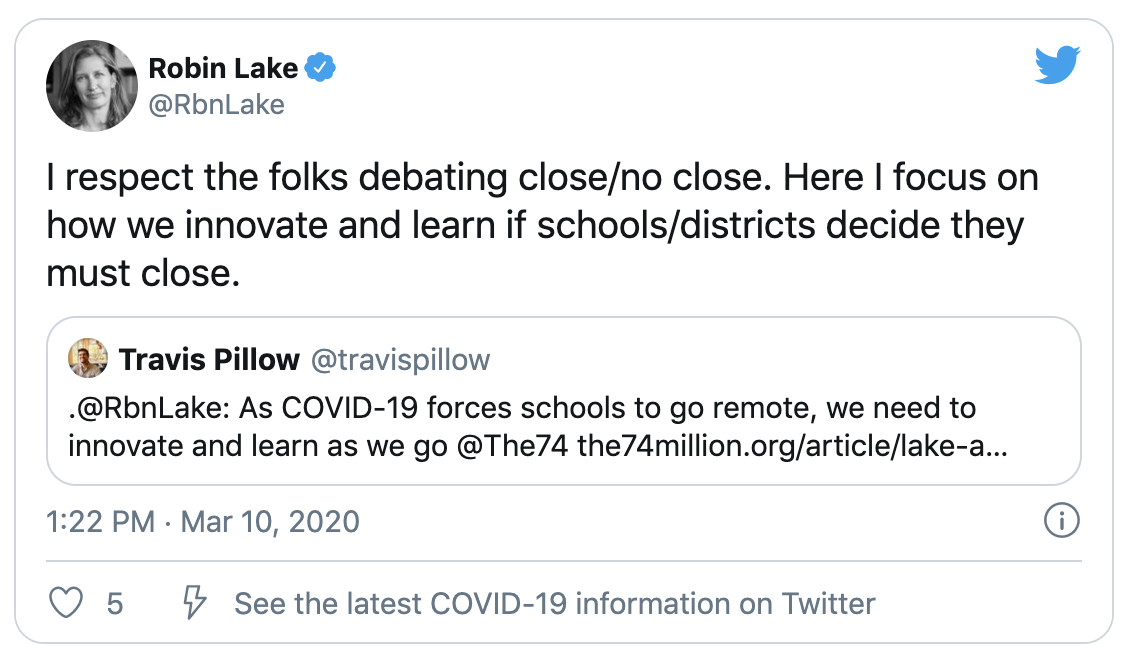 On Wednesday, March 11, the World Health Organization declared a pandemic and Seattle Public Schools announced a two-week closure. We in the Pacific Northwest could no longer be in denial, arguing abstractions. And yet, school districts in Washington State were back on their heels, largely unprepared to meet the significant food delivery, technology and learning needs of students, especially the most vulnerable. 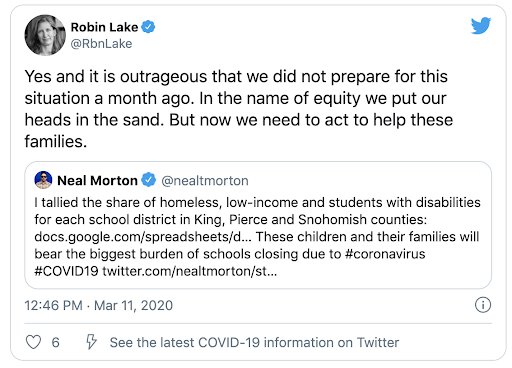 And it was dawning on the rest of the country that they’d be next. 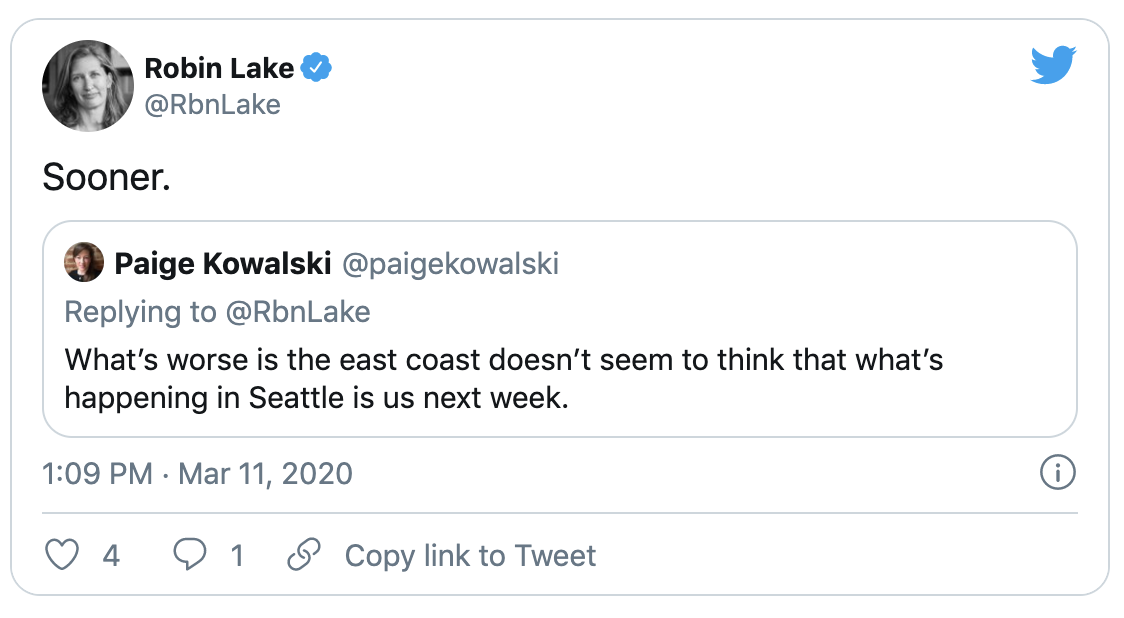 A year ago, I was urging schools to get ready to close. A year later, I am trying to get schools to reopen. It didn’t have to be this way. A story of denial, rigidity, resistance and fights over notions of equity could have been a story of leadership, innovation and collective action on behalf of kids. As we look forward to the next few months and years, will we continue with binary thinking, institutional stasis and silly Twitter debates, or will we find creative paths forward?

It was a long first two weeks, and it has been a long year. But since these early days, my research team and I have seen extraordinary leadership and creative solutions. My hope is for more and more of that in the coming days, weeks, and years. We’re going to need it.

As we look forward, we risk falling into yet another cycle of denial. I fear we will be so relieved to get back to normal that we’ll fail to address the staggering challenges ahead. All American students have suffered from this pandemic, whether from social isolation, missed academic learning or depression and anxiety. If we have any hope of giving this generation of students what we owe them before they graduate, we will need to act with speed, strategy and creativity.

This past year was completely exhausting, disappointing on many levels, but also revealing and inspiring. The crisis showed how deeply inequities are hardwired into the institutional structures of American public education and our thinking. But the creative solutions that did arise begin to point to a path forward. We can create education solutions that live up to the promise of this generation, and future generations, of students. That is the work we at the Center on Reinventing Public Education are turning to next.

Robin Lake is director of the Center on Reinventing Public Education. You can find her on Twitter @RbnLake