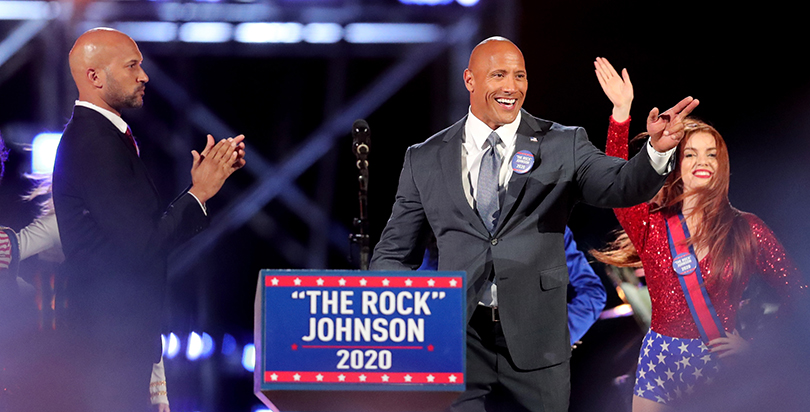 Mr. The Rock:
We’re thrilled to hear you’re considering running for elected office. Thoughtful and informed people should be more involved in government and civic life. One of us is from Hawaii and the other from Virginia – two of the great places you have roots now – so we’d be proud to call you Mr. President The Rock. And as a current Los Angeles resident, one of us would be relieved knowing you’d be there in case of an earthquake. (San Andreas was terrifying, and we don’t think Donald Trump could do any of those things … in fact, he’s actually proposing to cut some funding for California earthquake preparedness in his budget.)
But we want to talk with you about one thing: Juvenile justice. We know how much it matters to you. In Gridiron Gang, you played a real person, Sean Porter, who worked at one of Los Angeles’s youth probation camps. Recently, you produced Rock and a Hard Place, an HBO documentary about a boot camp alternative to prison for young people in Florida. It’s incredible that you want to work on this issue — an issue most funders and advocates still avoid. If you become president or a governor, this could be a remarkable legacy.
The boot camp program in your documentary is offered only to a selected group of eligible inmates. It’s highly structured and described by the film’s directors as “cruel.” According to the filmmakers, the program “operates … through a form of bullying in a benign sense; they need to identify the weakness and vulnerability of each one of these cadets — whether it’s a language weakness, physical weakness, or your temper. They are going to put you in a situation where your weakness imperils you…”
This program boasts an impressive 11 percent recidivism rate (compared with a 65–75 percent national rate), which shows that it works to keep this small selected group of young people out of contact with law enforcement — which is great! We can probably all think of at least one anecdote about successful “tough love.”
We’re worried, though, that people might take the wrong message from your documentary. The reality is that, on the whole, intervention programs that are heavy on the tough but light on the love are bad for most kids most of the time. In fact, researchers have long known that “the military aspects of a boot camp program undermine other rehabilitative efforts by endangering participants and creating an atmosphere of aggression and intimidation.” In 1998, the National Institute of Justice classified correctional boot camps as “programs that don’t work.” We’re not saying this approach can’t work, but the evidence says overall we should be cautious about it at any scale.
There are alternatives out there. There are policies that we could adopt — that you could champion — to fundamentally change the way that we respond to the bad behavior of young people who are consistently among our society’s most vulnerable and victimized. We could do it by focusing on education.
Most incarcerated kids have experienced chronic academic failure, and few of them are prepared for productive community participation. Being locked up drags them further behind and increases the likelihood that they will drop out of high school, that they will have more contact with the justice system, and that their children will one day be arrested too.
In Los Angeles, more than a hundred community stakeholders recently came together to rethink our approach to juvenile justice. They developed a vision for our young people that leads with education and skill building. It captures the essential elements of good evidence-based practice and makes an effort to shift all of our direct service agencies, including our schools, to a culture of care, instead of a culture of control. You can read the whole thing here.
The first place that this model will be piloted is at the newly rebuilt Camp Kilpatrick. You may remember it; that’s where Gridiron Gang was based. And the character you played? He helped to design it.
We know what works for kids in juvenile justice facilities, and it is, unsurprisingly, the same thing that we each want for our own children in our schools and in our homes: strong relationships, consistent high expectations, rigorous and relevant educational programs, and support in navigating pathways to success. That is actually what all kids need and sounds like a great issue for a campaign we think would be exciting.
Hailly T.N. Korman is a principal at Bellwether Education Partners on the Policy and Thought Leadership team, focusing on correctional education, justice-involved youth, and school discipline.
Andrew J. Rotherham is a co-founder and partner at Bellwether Education, a national nonprofit organization working to support educational innovation and improve educational outcomes for low-income students. He is also a contributing editor at U.S. News & World Report, the executive editor of Real Clear Education; is part of the Real Clear Politics family of news and analysis websites; writes the blog Eduwonk.com; and is the co-publisher of Education Insider, a federal policy analysis tool produced by Whiteboard Advisors. He serves on The 74’s board of directors.
Submit a Letter to the Editor
June 4, 2017