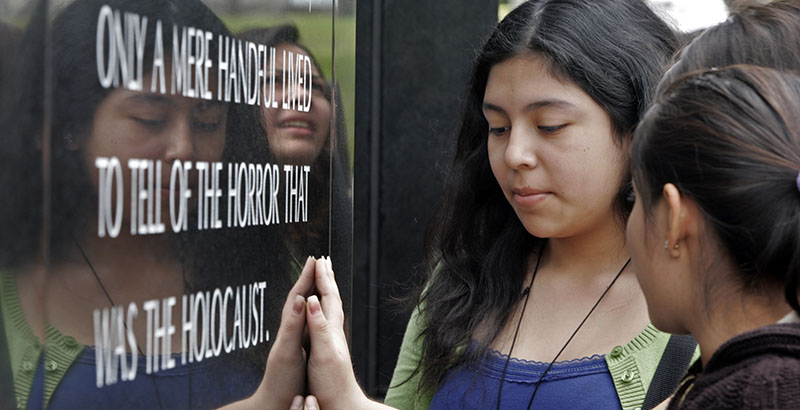 Hate crimes in the United States continue to surge, according to numbers released last month by the FBI, documenting the shocking rise in hostility toward “others” we’ve witnessed in recent years. Anti-Semitic violence, white nationalism and attacks on minorities and immigrants have become increasingly normalized. There’s no doubt that President Donald Trump has contributed to this escalation with his hateful rhetoric, but demonizing “others” didn’t start with this presidency, and it won’t end after it. We need long-term solutions to ensure that our citizenry can face the challenges of living in an increasingly diverse democratic society.

Two long-standing areas of research in the social sciences provide insights into the production of tolerance and democratic enlightenment, and potentially point to mechanisms for strengthening them.

First, there is a widely held belief, backed by considerable research, that intergroup exposure increases tolerance for others and reduces harmful prejudices. Exposure to the experiences of others helps us see them as human beings deserving of dignity and respect.

Second, we know there is a strong positive relationship between education levels and tolerance. The more educated people are, the less likely they are to hold hateful prejudices. Moreover, research increasingly suggests that a community’s education levels amplify the effects of experiences that generate tolerance, such that greater education is a rising tide that affects everyone.

The United States already goes to great lengths to increase education levels of its citizens, but we don’t do enough to formally cultivate exposure to others. Would additional deliberate efforts to increase our shared experiences increase racial, religious and political tolerance? Perhaps, but only if the conditions are right.

Our recently published study, looking at the effects of students learning about the Holocaust, sheds some interesting light on how education environment and exposure to others may work in tandem. In our experiment, we randomly assigned students to participate in an educational program at the Holocaust Museum Houston. Learning about the Holocaust exposes students to the most horrific consequences of prejudice and dehumanization. The historical lessons included firsthand testimonials from Holocaust survivors, and the program stressed the notion of agency and the fact that individuals are responsible for making moral choices in their everyday lives.

Consistent with conventional wisdom, our theory was that learning about the Holocaust would not only increase historical knowledge but also increase tolerance, respect for civil liberties and the likelihood students would intervene on behalf of people being oppressed.

Indeed, we did find positive impacts on historical content knowledge, but we found mixed results on civic values and attitudes that were shaped by the education levels in students’ homes.

As a result of learning about the Holocaust, students from college-educated families showed an increase in support for civil liberties, which is pivotal for the preservation of a free society against the threats of tyranny. Moreover, in a behavioral component embedded in our study, the students from educated environments were more likely to donate to human rights causes. Each student received $5 as a token of appreciation for participating. At the conclusion, they were given the option to donate a portion to the Anti-Defamation League.

Students from college-educated families who had learned about the Holocaust in our experiment were more likely to maximize their charitable donations to the organization. However, those from less-educated households were not more likely to donate to the Anti-Defamation League, did not show increased support for civil liberties and actually responded less positively on indicators of religious tolerance, such as agreeing that there are acceptable religious beliefs other than their own.

To be clear, the experience didn’t make students from lower-educated environments anti-Semitic — they still held fairly tolerant positions, on average, but the experience left them less religiously tolerant than similar students who did not participate in the program.

Mere exposure to the experiences and persecution of others, it seems, is a necessary but insufficient method for generating tolerance. The benefits of exposure are conditional on having an educational foundation that aids an individual’s ability to process challenging material in productive ways. Without this foundation, exposure alone may have polarizing effects.

Our results echo the findings of another recent study from Harvard researchers who examined attitudes toward immigrants and policies such as public housing assistance and support for low-income children across more than 20,000 respondents in six countries. When subjects were randomly nudged to think about immigrants, those with lower education levels decreased their support for such policies and decreased their own support for charitable donations. In another component of the study, providing favorable information about immigrants increased support for such policies, though this was not enough to counteract the negative effects among the non-college-educated subjects.

The implications of these mechanisms are playing out in real time in the United States. The Trump election strategy succeeded by manipulating less-educated voters with divisive propaganda aimed at immigrants and minorities. Nearly 70 percent of white voters without a college degree voted for Trump in 2016. Support for his Muslim ban was twice as high among non-college-educated Americans, and a whopping 86 percent of Trump voters in 2016 supported building a wall across the entire U.S. border with Mexico. Moreover, Americans without the benefit of a strong educational foundation are more likely to hold authoritarian attitudes, creating a dangerous mix of prejudicial attitudes and a willingness to impose them through force.

Preparing citizens for the roles and challenges that come with sustaining a healthy democracy is an essential goal of education in the United States. Yet in most policy conversations, civics education is an afterthought, and if it receives attention at all, the focus tends to be on acquiring knowledge of processes and institutions. Rarely is the focus on strategies to provide a foundation for democratic enlightenment. If not formally addressed, those without the luxury of living in educated environments will increasingly be swayed by divisive demagogues. We need to take bold actions to reassess civics education with the explicit intent of promoting democratic ideals, such as tolerance, pluralism and the protection of civil liberties. Instilling these values is a critical step in the development of citizens capable of serving as protectors of freedom and human rights in an increasingly diverse, and polarized, democratic society.

Brian Kisida is an assistant professor at the Harry S. Truman School of Public Affairs at the University of Missouri.

Daniel H. Bowen is an assistant professor in the Department of Educational Administration and Human Resource Development at Texas A&M University.

Daniel H. Bowen is an assistant professor in the Department of Educational Administration and Human Resource Development at Texas A&M University.