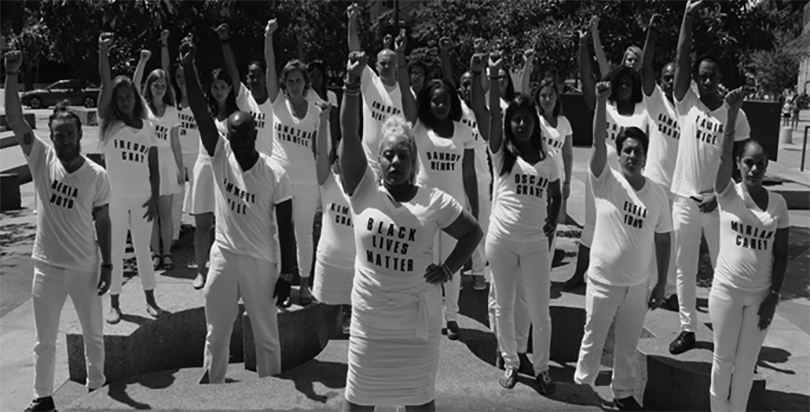 On Thursday, Tracy McDaniel listened to middle school students, who had gathered in the gym at KIPP Tulsa College Preparatory, talk about how to make the world more just.
It's the adults who need to learn from the kids, he thought.
Just three days earlier, police released videos showing an officer fatally shooting Terence Crutcher, an unarmed black man and the father of a KIPP Tulsa middle schooler.
Some of the students said that if they had a chance to talk to the city police chief, they would tell him to hire more black police officers; one student said he would give the police department more training to avoid shootings; others wanted policemen to visit their school and get to know them so they won’t be so afraid of African Americans.
“There are mixed questions. There are mixed emotions,” said McDaniel, executive director of KIPP’s school in Oklahoma City. “They know the incident shouldn’t have had happened.”
In the wake of Crutcher’s death, students and educators at KIPP schools across the country are mourning his loss, reflecting on their own experiences with police and talking about systemic racism in law enforcement in America.
“Everyone feels angry right now, but that’s not going to fix the problem,” said McDaniel. “The kids, especially the African-American male students…they know three or four years from now they are going to be driving out there in these cars. They may have encounters with the police, so they were looking for solutions.”
With killings of unarmed black men by police officers regularly punctuating the news, the KIPP network of 80,000 students in 200 schools across 20 states has increasingly shared the rhetoric and, on some issues, the policies of black civic groups and the Black Lives Matter movement.
Notably, this conversation is emerging at a time when black organizations are debating whether the growth of charter schools has helped or hurt kids of color.
(The 74: Much Attention on Upcoming NAACP Charter Vote, Even if It’s Just the Latest in a Long Line)
“This is beyond a tragedy. It is an outrage. While Mr. Crutcher’s death hits home in the KIPP community, it is part of a pattern of violence that has gone on across this country for far too long,” KIPP CEO Richard Barth said in a letter to KIPP families.
“In my view, this is about fear — the senseless killing that can result from fear. Fear is what makes a police officer discharge their firearm at an unarmed person. And if a police officer is that fearful, they either need more training or they should not be a law enforcement officer. Full stop. We must demand this, for fear cripples us — all of us,” Barth said.
“For many of our KIPP families and students, the threat of police violence is a constant worry,” he added.

As a @Kipp grandparent & as a #KIPP board member, I join the KIPP family in mourning the senseless loss of a KIPP parent, #TerenceCrutcher.

In footage captured from several angles, Crutcher could be seen walking toward his car with his hands above his head while several officers approached him with their weapons raised. He stood by his car window when an officer, Betty Shelby, pulled the trigger, fatally shooting him. Authorities announced recently that Shelby would be charged with first-degree manslaughter in connection with Crutcher’s death.
While Crutcher’s shooting provoked outrage across the country, it took a particularly emotional toll on the KIPP Tulsa community because Crutcher was the parent of a sixth-grade student.
“Mr. Crutcher was a father, a student, a brother, and a member of our school community,” Andrew McRae, KIPP Tulsa’s school leader, wrote in a letter to parents. “We share the Crutcher family’s grief and stand with them as KIPPsters in their call for justice.”
Rebecca Lee, a teacher at the school, recounted in a viral Facebook post what her “wide-eyed” fifth-graders asked after the killing.
“Why did they have to kill him? Why were they afraid of him? Why does [student] have to live life without a father? What will she do at father-daughter dances? Who will walk her down the aisle? Why did no one help him after he was shot? Hasn’t this happened before? Can we write her cards? Can we protest?”
In another group, sixth-grade students clutched tissues but had little to say as they thought about what happened to the father of the girl they sit next to in class.
“I give them the space to process silently. Then I tell them, ‘We have different skin colors. I love you. You matter. You are worthy. You are human. You are valuable,’” Lee wrote. “Shoulders shake harder around the circle. I realize that this is the first time all year I have affirmed my love for them.”
The school planned to release balloons on Friday in solidarity with the Crutcher family. In New York, KIPP parents were encouraged to talk about the death with their children, and schools held a moment of silence in honor of Crutcher and all victims of police and gun violence. Other KIPP regions are hosting discussions and events in response to his death.

This morning KIPP NYC observed a moment of peace, unity, and silence for Terence Crutcher, a member of our KIPP Tulsa team and family. pic.twitter.com/KVeIFYzIlD

This is not the first time KIPP has started conversations about fatal shootings by police officers. For almost a year, Barth has been reaching out to an informal group of advisers about how the network can better address social justice issues, according to a spokesman.
In July, KIPP invited alumni to share reactions to the deaths of Philando Castile and Alton Sterling; those comments were subsequently posted on the network’s Facebook page. “It is just not acceptable for our KIPPsters to wake up every day believing they can do everything right, and it still might not matter,” Barth wrote in his invitation.
Later that month he delivered a speech at the KIPP School Summit in Atlanta declaring support for Black Lives Matter and a commitment to ensuring KIPP schools are culturally sensitive, embrace restorative justice and maintain a diverse staff.
Barth recently asked KIPP communities to support the NAACP’s Protect and Preserve Our Lives Pledge. The network has also launched a voter registration campaign.
KIPP’s support for Black Lives Matter’s positions on police and racism stands out in a time when many charter networks shy away from political debates that don’t involve charter school policies.
But although KIPP leaders have weighed in on the issue of police shootings, some black organizations have argued that the growth of charter networks like KIPP harm black youth.
In July, NAACP delegates passed a resolution calling for a moratorium on charter schools, arguing that they take resources away from the public school system and use punitive discipline practices. The NAACP board will vote to ratify the proposal next month. Soon after, the Movement for Black Lives, a coalition of racial justice organizations that includes BLM, also released a platform calling for a moratorium on charter schools.
In response, more than 160 black education leaders sent a letter to the NAACP asking them to reconsider the resolution.
“Bottom line, we want the same things: we want these murders to stop,” said McDaniel, the KIPP Oklahoma City head who is also one of the signatories of the letter. “The charter school issue is totally separate from this issue.”
At KIPP Tulsa on Wednesday, a group of 13- and 14-year olds were having an entirely different conversation about race. Lee, the teacher who posted on Facebook, recounts that they spoke “matter-of-factly” about what might have led a police officer to pull the trigger on Crutcher.
“‘What made him “a big bad dude”?’” a boy asks in her post. “‘Was it his height? His size?’”
“I look at the boys in my circle, all former students of mine. They have grown inches since their first day in my class. Their voices have deepened. Their shoulders broadened. They all nod their heads in agreement at the student's last guess — ‘The color of his skin?’”
Submit a Letter to the Editor
September 25, 2016