King: A Tribute to Don Stewart, an Education Giant Who Helped Countless Black Students to and Through College 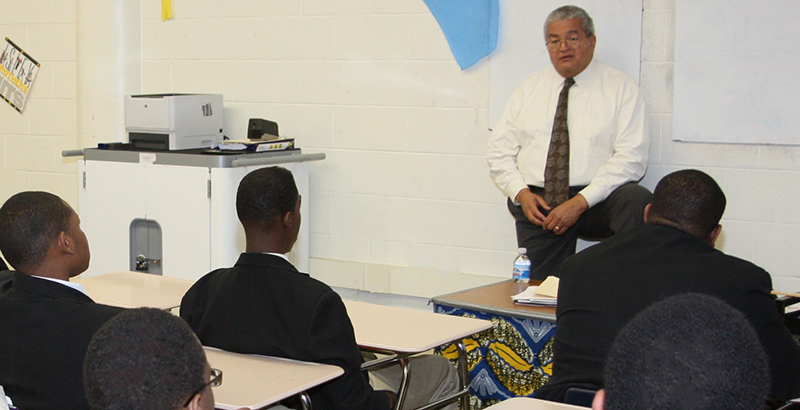 The late Don Stewart speaks to young men during a Success Session at Urban Prep. Stewart grew up on Chicago’s South Side and was deeply involved in the college-prep charter school whose students are all African-American males and mostly low income (Courtesy of Urban Prep)

One of my most vivid memories of Don Stewart, who passed away April 7 at the age of 80, was when he was being introduced at Urban Prep’s Convocation, where we welcome the new freshman class to the Urban Prep Family.

All Don had to do was walk on stage and stand with the other elders from the community to show their support for our newest students. When his name, colleges and degrees were announced, the MC misstated where he’d earned his doctorate. Don walked up to the podium, leaned in to the mic and said: “It’s Hahhhvard.” Of course, writing it doesn’t do it justice. His inflection, tone and presence as he uttered those two words were everything. And the crowd went wild.

Don led an incredible professional life. He was president of Spelman College, head of the College Board (which administers the SAT and college scholarships), a director of the New York Times and CEO of the Chicago Community Trust, which awards more than $300 million in grants to nonprofits annually. He was a “first-gen” student at Grinnell College in Iowa and earned a master’s from Yale and a doctorate from the aforementioned Harvard’s Kennedy School.

Imagine my surprise when someone with this educational pedigree and professional experience called me and asked about my work at Urban Prep. At that point, we were a fledgling school with one campus and just over a hundred students — we didn’t even have seniors yet. Don, along with his wife Isabel, visited the school in Englewood (Don was from Chicago’s South Side), met with me and then committed to help us fulfill our mission of increasing the number of young black men going to college.

King: College Attainment Is Hard — Especially for the Most Disadvantaged — but Not Pursuing a Degree Is Far Worse

In addition to personally donating, Don raised money for Urban Prep, most notably from an annual campaign through his fraternity, Sigma Pi Phi (The Boulé). He showed up at every event to support our work. And he initiated a mentoring program with our students. Every week, some of Chicago’s most successful African-American men — doctors, lawyers, entrepreneurs and elected officials — came to Urban Prep at Don’s request to talk to our students in small groups and share their life stories on how they navigated paths from some of the city’s toughest neighborhoods to some of the country’s toughest colleges. These “Success Sessions,” as we called them, were so popular that students clamored to get into them. Don attended the mentoring sessions and was a real inspiration to our students.

Over the years, he also managed to find time to mentor me. Our many lunches and telephone conversations were always inspiring, but now, with the knowledge that there won’t be anymore, seem to have been woefully too few. Also too few were the times I acknowledged his impact on my education and career. It recently occurred to me that Don — as the leader of the organization responsible for revamping the SAT and launching initiatives to increase minority preparation for it — had actually played a part in directing my life’s trajectory as a high school student, teacher and college counselor. I wish I had told him that.

There are many men and women who live their lives so publicly that it’s easy to think that they are the only ones bending the moral arc toward justice. But there are others who, much more quietly and consistently, are also doing real work. Don was one of those people. He may never be named in the history books as one of our country’s justice warriors, and you likely won’t find his photo in black families’ living rooms alongside those of Martin, Malcolm and Barack. But his impact on our country, particularly related to college access and achievement for young people, is as meaningful and profound as our most heralded heroes.

Between his work at Spelman, the College Board, the University of Pennsylvania, the University of Chicago and Urban Prep (not to mention the other educational institutions and organizations with which he worked), he had a hand in helping millions of young people find their way to and through college.

At the end of an Urban Prep graduation, as I led the recessional of over a hundred young black men who’d just received their diplomas to go along with their college admission letters, Don once again interrupted an Urban Prep ceremony. This time, instead of grabbing the mic, he grabbed me and, punching me gently on the arm, said, with tears in his eyes, “I’m proud of you.”

No, Don, it is we who are proud of you and we are thankful, thankful that you lived a life dedicated to providing so many people with more than just a college degree, but a higher education.

Tim King teaches at Northwestern University and is the founder and CEO of Urban Prep Academies, a nonprofit organization operating a network of all-male charter public schools in Chicago. One hundred percent of Urban Prep graduates, all African-American males and mostly from low-income families, have been admitted to college.

Tim King teaches at Northwestern University and is the founder and CEO of Urban Prep Academies, a nonprofit operating a network of all-male charter public schools in Chicago. One hundred percent of Urban Prep graduates, all African-American males and mostly from low-income families, have been admitted to college.