Kay: Why Board Games Can Be the Best Way to Teach Tricky Subjects — and Immerse Students in History 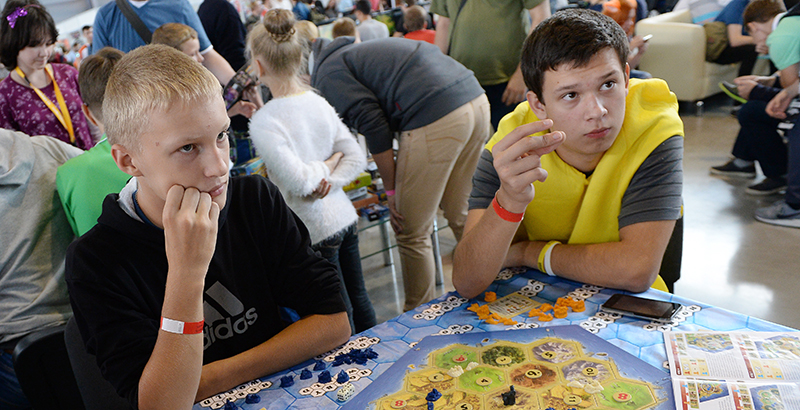 Fictional stories are powerful tools for inspiring a love of real history. A child who identifies closely with the hero of a made-up tale will long to inhabit the hero’s historical milieu — a longing that can express itself not only in imaginary short-term play but also as long-term interest in the underlying subject. He or she may also identify with characters in stories such as Uncle Tom’s Cabin, Schindler’s List, Amistad, Philadelphia or To Kill a Mockingbird and thereby internalize the issues of good, evil and injustice that pervaded the eras and societies in which they were set.

But from an educator’s point of view, this established form of storytelling has limitations. Books and movies such as these tend to follow predictable story arcs, dividing characters into simple categories of good and evil. The moral stakes embedded in the plot are clear and unambiguous.

Not all of history can be fairly captured in this way. This is where board games can serve as a valuable educational tool: By leveraging a child’s naturally competitive instincts, they help solve the problem of how to imbue students with a sense of personal immersion in history — and even a personal investment in a particular historical outcome — even when the underlying context lacks the well-defined moral contours and personal drama that mark character-driven narratives.

Much of my own historical education has come through board games. These include Here I Stand: Wars of the Reformation 1517-1555, a six-player game in which participants take command of the Ottomans, Habsburgs, English, French, Papacy or Protestant revolutionaries as they all seek to exert control over Europe. Another title I found educational was the deceptively simple cooperative French card game The Grizzled, in which players seek to ward off the madness and terror that seized the minds of soldiers during the trench warfare of World War I. This is not a game of good versus evil, or even of Allies versus Central Powers, but rather a fantastically imaginative gamification of a soldier’s mind as the ravages of war propel it past the engineering limits of human resilience.

Or consider a game such as Triumph of Chaos: The Russian Civil War 1918-1921, which assigns players the command of either the Red (Communist) or White (Reactionary) side. Unlike World War II or the U.S. Civil War, this was not a conflict that might be cast as a fight between good and bad. Both sides opposed democracy and committed unspeakable acts. There was no clear front line, and the actual outcome of the conflict eventually was dictated by a complex mix of logistics, military strategy, foreign intervention and sheer luck. Even as an adult, I had difficulty educating myself about this conflict, because books and documentaries devoted to the subject led me through a confusing thicket of names and places. Yet the opposite was true when I played the Red side in Triumph of Chaos. Intent upon besting my (White) opponent, I pored over faux-historical developments as determined by cards drawn from a deck — not as a matter of educational duty, but as an urgently felt strategic imperative.

Though these examples are historically themed, there also are plenty of lessons for students to learn from games with invented premises, such as Catan (formerly known as Settlers of Catan), in which players use combinations of five resources — wood, wheat, stone, brick and sheep — to build networks of roads, settlements and cities. Because the available inventories of these resources rise and fall randomly during the game, there are natural cycles of glut and scarcity. The game has no formal mechanism to establish the price of any of resource. Instead, the relative values fluctuate organically according to need and availability, a perfect illustration of the manner by which supply and demand affect price in any free market.

Other mechanisms within the game illuminate more advanced economic concepts, such as competitive advantage, product complementarity (wheat and stone pair well when it’s time to build a city, for instance) and even import substitution versus an export-driven economy. Moreover, the game rewards skilled negotiators and penalizes those who are persuaded to accept lopsided deals.

But perhaps the most important lesson that any Catan player will learn has to do with statistics. Roll one six-sided die, and you will have an equal chance of producing 1, 2, 3, 4, 5 or 6. But when you take the sum of two rolled dice, things become more complicated. Explaining this complexity to students in a classroom may induce yawns, but demonstrate the same principle in a game of Catan, and the reaction may be different. A hunger for knowledge is acquired. But the desire for victory is innate.

Jonathan Kay is the co-author, with Joan Moriarity, of Your Move: What Board Games Teach Us About Life, newly published by Sutherland House. Follow him on Twitter at @jonkay.

Jonathan Kay is the co-author, with Joan Moriarity, of Your Move: What Board Games Teach Us About Life, newly published by Sutherland House. Follow him on Twitter at @jonkay.