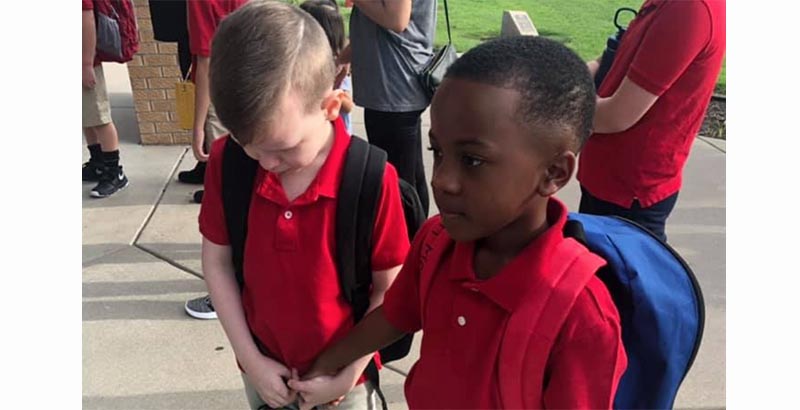 At the start of the school year, Facebook is filled with first-day photos taken by proud parents, but few pictures turn the children — and their mothers — into social media stars.

That’s just what happened when second-grader Christian Moore reached out to a frightened classmate with a simple act of kindness.

I’m so proud of my son, he seen a kid balled up into a corner crying, so he went to console him, grabbed his hand and…

“I’m so proud of my son, he seen a kid balled up into a corner crying, so he went to console him, grabbed his hand and walked him inside of the school!” Christian’s mom, Courtney, wrote in a post she assumed would be seen only by her friends. “It is an honor to raise such a loving, compassionate child! He’s a kid with a Big heart, the first day of school started off right.”

Connor Crites, 8, has autism and was overwhelmed by the noise, crowd and excitement of the day — until Christian reached out his hand, that is. The gesture, caught in Moore’s photo, took place in Minneha Elementary School in Wichita, Kansas. But compassion is universal, and the photo was shared and reshared, quickly capturing hearts in ever-widening circles around the world.

Among the first to see it was Connor’s mom, April.

This made me sad but also absolutely warmed my heart. I'm so happy a caring little boy was so kind to my baby.

“This made me sad but also absolutely warmed my heart,” she posted. “I’m so happy a caring little boy was so kind to my baby.”

Crites had long worried about how Connor, who was nonverbal until he was 5, would fit in with other children.

It’s a fear many parents can relate to.

I remember RJ‘s first day of school like it was yesterday. He was so overwhelmed and this story just really lifts my spirit today: –
Photo of 8-year-old Wichita boy helping classmate with #autism goes viral https://t.co/tFfv0qTwiw via @07lovechild 💙

So grateful for kids like this! It gives me so much hope and comfort 😌🙏🏿💙. I definitely believe it starts in the home. Everyone deserves love. #LiterallyCrying #AutismAwareness

But when Christian looked at Connor, he didn’t see disability or any of the other barriers that keep grown-ups apart. He just saw a child in need.

“He was kind to me,” Connor told KAKE-TV News in Wichita. “It was in the first day of school and I started crying, then he helped me and I was happy.”

“The rest is history,” Moore told the station. “They have an inseparable bond.”