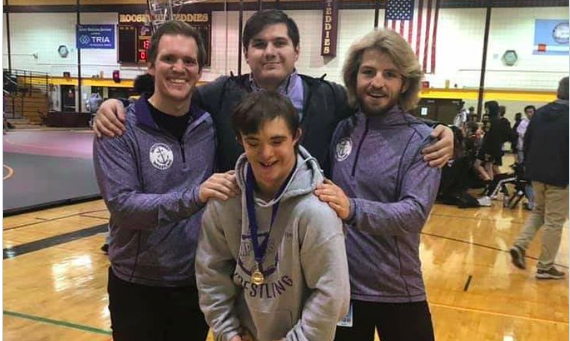 It’s hard to say who was more excited about Minneapolis Southwest High School’s big win at a city wrestling tournament — the coach, the team or the fans.

The victorious wrestler himself seemed to take it in stride.

Wyatt Speck, a 120-pound sophomore who has Down syndrome, was the only member of the school’s junior varsity team to take the championship in his weight class.

“It was awesome,” Wyatt told CBS Minnesota, adding that he was not only prepared, he expected the win.

⭐This. Is. Why. We. Do. It. ⭐Our guy Wyatt is the MPLS JV City Champ!!! Won all three matches tonight! Moments like this don't come around often when you can coach someone who simply loves the team, sport, and atmosphere around him and also see some true success from it. I couldn't be more proud to be a part of this young man's life and see him defy obstacle after obstacle! A real success story right here and it ain't over yet! #fullcircle

His team was certainly thrilled.

“I’ve never seen a kid get hoisted so high in the air in a high school gym in my life,” wrestling coach Ben Cousins told CBS Minnesota.

On Friday night a Minneapolis Southwest wrestler won the jv city tournament. Wyatt Speck has Down Syndrome and no one was more proud than his coach- who has autism. At 10:00, how their bond has inspired Wyatt’s family, friends and teammates. @WCCO #wcco pic.twitter.com/pDijV0Dbxg

“He got off the mat and I looked over at his team and his whole team had tears in their eyes and smiles bigger than life,” she told CBS. “And they just all embraced him. They picked him up in the air.”

Cousins, who has autism, wrestled in college and knows how hard it can be for someone with learning differences to be accepted.

“We like to preach ‘humans first, athletes second,’” Cousins told CBS. “We want to become the most inclusive team in the state, and Wyatt is a big part of that.”

“We want to be the most inclusive team in the state… “ ❤️ #Inclusion #All https://t.co/9Tkonx4gGR

Wrestling isn’t the only extracurricular that Wyatt enjoys.

He also ice skates and plays in the string band.

It's amazing being on stage with these kids seeing how they get better and better every time! Genuine happiness yesterday from this bunch and the crowd with the finished (nationally recognized)product! #3Strings #spectrum #blessings #music

Still, it’s one thing to participate, entirely another to prevail in a championship match, 11-3.

“Just winning the city championship like that, it enforced all of that,” Amy Speck told CBS. “He can do anything he wants to do, and he’ll continue to do it.”

#Repost @sw.lakerwrestling GREAT DAY TO BE A LAKER. • • • • • • Fun and productive time serving the French Toast Breakfast today for the 2nd year! Wrestlers, parents, and Coach all pitched in👏 #peoplehelpingpeople #community