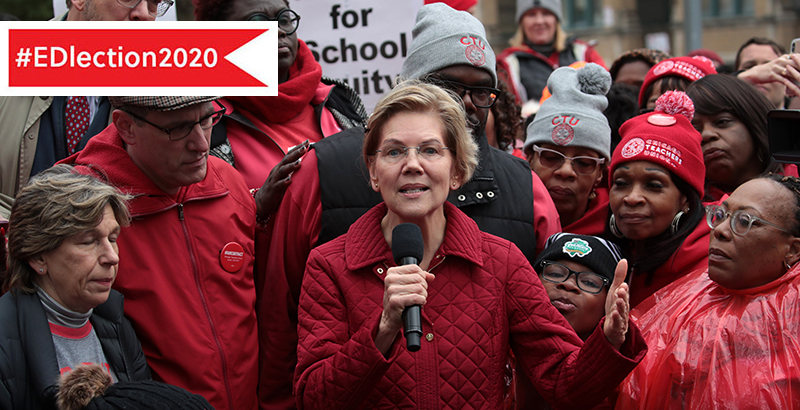 Earlier this week, Sen. Elizabeth Warren broke with decades of progressive leaders as she took a stand against an institution designed to create opportunity for our nation’s children.

In her K-12 education plan, the Democratic presidential candidate threatened to end the federal Charter School Program — started by President Bill Clinton, expanded under President Barack Obama and supported by numerous progressive policymakers in the years between and since.

It’s a move that not only stands in stark contrast to the widespread support among Democrats for Obama’s legacy of innovation and choice within the public school system, but also would undercut opportunities for America’s most historically underserved students.

Public charter schools have long existed because low-income parents, particularly parents of color, demanded better educational options for their children. They exist because children have diverse learning styles and needs, and too many traditional districts were resistant to the kind of differentiation required to meet them. And they exist because in too many places, too many of our schools failed to provide low-income children, in particular, with the quality education they deserve.

Warren’s proposal also contravenes her professed program for the poor and works against institutions that deny opportunity to low-income and working families. Parents with financial means already have choice. They move to neighborhoods based on school quality or use their economic and political resources to game admission to selective public or magnet schools — or simply pay outright for education and send their children to private schools. Public charter schools are one of the few policy interventions in education that empower low-income families with a modicum of the opportunity available to the wealthy.

The data, furthermore, support the charter school option. The most rigorous and methodologically sound studies show that students of color, children in poverty and English learners make significantly greater academic progress in public charter schools compared with their peers with similar demographics in traditional public schools. Our best urban public charter schools provide students with the equivalent of three to five months of additional learning in math and reading, versus what they would have received otherwise. Most importantly, students attending public charter schools are also more likely to graduate from high school and college.

It should come as no surprise, then, that communities of color want a variety of public school choice options, including public charter schools — with 86 percent of African-American and 67 percent of Latino voters in support.

My organization, Education Reform Now, and I agree with Warren that for-profit charter schools should be banned and that there should be strong accountability for all public schools — including charters. If a school isn’t serving students, it should be closed — charter or otherwise. But limiting options for families is the wrong plan for any advocate who claims to fight for low-income children.

To improve the quality of education in this country, we need more high-quality schools for our students, not fewer. We also need a president who will honor, not override, the clear preferences of the black and brown voters whom progressives claim to fight for.