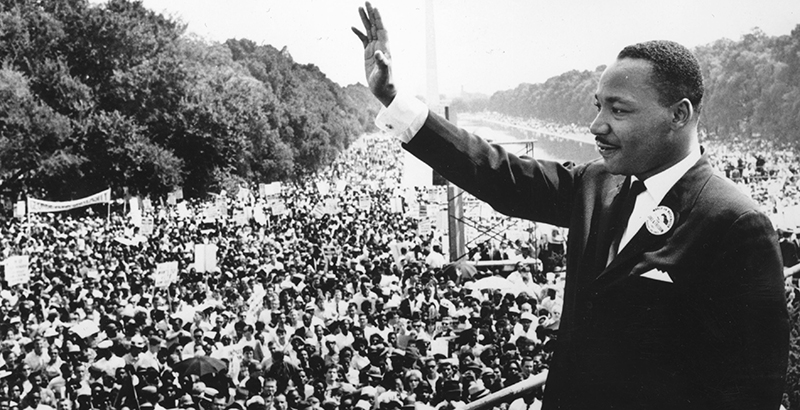 Black civil rights leader Martin Luther King (1929–1968) addresses crowds during the March on Washington at the Lincoln Memorial in Washington, D.C., where he gave his “I Have a Dream” speech. (Central Press/Getty Images)

Standing at the Lincoln Memorial in late August 1963, Dr. Martin Luther King Jr. outlined the “shameful condition” of African Americans in our society. He spoke movingly of a people who, a full century after emancipation, had not yet achieved their promised freedom, who remained on the fringes of society, bound in the shackles of inequality.

More than 50 years later, King’s words still have the power to hold us accountable. As we celebrate how much our nation has changed since 1963, we must also recognize that some institutions remain stuck in the past. The reality of inequality remains intact for far too many Americans, especially those born into poverty.

This is painfully apparent in our schools, where the tools of a successful, productive life are forged. Consider where disadvantaged students stand today.

Just 37 percent of today’s students will leave high school ready for college coursework or a good job. Nearly half of our African-American and Hispanic fourth-graders are not even reading at a basic level. And nearly a quarter of our nation’s low-income students fail to earn a high school diploma on time.

All the while, the world around us is moving faster than ever before. Most aspects of our lives, from how we communicate to how we shop to how we travel, have been customized through technology. Entire industries are being automated, and the very nature of our economy and workforce is rapidly changing.

Yet the conversation around education remains stuck in 20th century politics and policies. The school calendar is still dictated by an obsolete agrarian model. The teachers unions wage the same daily political fights they’ve been waging for decades, opposing anything that threatens to disrupt a monolithic, government-monopolized system, especially educational choice. The commonsense practice of assessing whether students are learning remains illogically under attack from an entrenched establishment that doesn’t want to be held accountable for the results. Social promotion, the practice of moving students to the next grade level regardless of their readiness, is the norm in most states.

Meanwhile, the 34 countries whose students outperformed American students on the most recent international math assessment are working to innovate, customize, and redefine their schools so their next generation of citizens will prosper in this new economy.

Not surprisingly, the students most harmed by opposition to educational choice are those most in need of higher-quality options. As the income gap grows, stratification in American society is calcifying. Children born into poverty increasingly are doomed to live in poverty. Children born into wealth are more likely to live in wealth. Education remains the best tool for leveling this playing field, for addressing the inequities King pointed to more than a half-century ago. Yet large swaths of children, especially those from poor families, are confined to chronically failing public schools — all while the adults in the system persistently fight efforts to expand opportunities for these kids.

In Florida, when the teachers unions unleashed a legal attack on the Florida Tax Credit Scholarships program for low-income students, parents would not accept backsliding on this choice option. At a memorable rally in 2016 led by King’s son Martin Luther King III, we saw more than 10,000 parents, plus African-American and Hispanic religious leaders, tell the unions to cease and desist.

During his lifetime, King understood the value of education and was remarkably prescient in describing what is required in today’s world.

“The function of education is to teach one to think intensively and to think critically,” he said. “Intelligence plus character — that is the goal of true education.”

Recent advances around the nation to open our education system and give parents and students more choices are encouraging, but they’re happening too slowly. Keeping pace with the disruptive nature of today’s society requires that we pursue policies that will upend our education system in ways never considered before. It’s time all parents in America — regardless of ZIP code or income bracket — had the access and right to a full and competitive menu of school options to meet the unique needs of their child.

Delivering a quality education to every child is our call to action. King’s dream for an equitable and just society depends on it.

Jeb Bush was the 43rd governor of Florida and ran for the 2016 Republican presidential nomination. He is founder and chairman of the Foundation for Excellence in Education, a national nonprofit advocacy organization committed to transforming education in America.

Disclosure: The 74 and the Foundation for Excellence in Education both receive funding from the Bill & Melinda Gates Foundation, Bloomberg Philanthropies, the Walton Family Foundation, and the William E. Simon Foundation.