New York, New York
Ivanka Trump hugged Success Academy founder Eva Moskowitz after her surprise tour of the high-performing charter school network’s Harlem flagship Friday, just one day after Moskowitz told President-elect Donald Trump she wasn’t interested in being education secretary.
Ivanka Trump rolled up to the school on 118th Street Friday morning in a white SUV accompanied by security and billionaire hedge fund manager Dan Loeb, a strong supporter of school choice and a major contributor to Moskowitz’s schools. School personnel were reportedly informed of the visit the night before and were busy all morning preparing. Success’s Harlem 1 school shares space with two New York City public schools, P.S. 811 and P.S. 149.
It wasn’t clear what sparked Ivanka Trump’s interest in Success Academy, but on Thursday, Moskowitz, one of the higher-profile candidates being considered by her father for education secretary, said she wasn’t going to take the job, preferring to advocate for school choice as a private citizen. She did, however, embrace Trump’s “strong support for school choice,” calling it “one of the most powerful education reform ideas ever.”
(The 74: Success Academy Leader Eva Moskowitz Doesn’t Want Ed Secretary Job, Defends Trump Platform)

The hush-hush meeting between Ivanka Trump, one of her father’s top advisers, Loeb and Moskowitz lasted about an hour, sources said. A Success Academy spokesperson declined to comment on the meeting, as did Loeb. A Trump spokeswoman did not immediately respond to a request for comment.

A teacher at P.S. 811 said she walked into the building around 7:20 a.m. and noticed the Success Academy principal holding a staff meeting to prep for the visit.

Mindy Rosier, the teacher, said the joint appearance might be intended to cement Moskowitz’s support of Trump’s school choice plan, rather than push her to change her mind about joining his administration. Moskowitz met with Donald Trump at Trump Tower on Wednesday, the day before she said she was not leaving her 14,000-student, 41-school charter network for D.C.

Donald Trump has proposed spending $20 billion in federal money to boost school choice programs at the state level, including charter schools and vouchers.

(The 74: Whitmire: Donald Trump, the Best (or Worst) Thing to Happen to School Choice?)

“I don’t think Eva’s changing her mind [about the education secretary job]. I think parents would probably revolt,” Rosier said. “I think it would be a smack in the face to all the parents and children she represents.”

Rosier was referring to Trump’s racist rhetoric and anti-immigrant stances and the fact that a majority of Success Academy students are children of color from low-income families.

The Alliance for Quality Education, an advocacy group that opposes charter schools and is backed by the New York City teachers union, criticized Moskowitz for embracing Trump and hosting his daughter, citing the same rhetoric and saying Moskowitz was more concerned with furthering charter schools. (Charters are publicly funded, independently run schools that are typically not unionized.) An AQE demonstrator with an “Eva Loves Trump” sign was outside Success Academy Friday morning, along with two reporters and some curious passersby.

The possibility of an alliance between the president-elect and Moskowitz — two brash New York influencers — gives public school supporters and other education watchers new fodder in the longstanding fight between Moskowitz and Mayor Bill de Blasio over space to expand the charter network in district schools throughout the city.

Tensions between Success Academy and the Harlem district schools, which serve special education students, over their space-sharing arrangements at 34 W. 118th St. have lingered for the 10 years the co-location has existed, Rosier said.

“There’s a gym class that was held in a classroom and therapy happening in closets,” Rosier said.

At the same time Moskowitz announced she wasn’t interested in the education secretary appointment, she and Success Academy families demanded that the mayor provide permanent locations for the network’s 465 middle schoolers who don’t know where they will be going to school this fall. A December 2 deadline for the city to come up with a space proposal is fast approaching.
(The 74: Campbell Brown: NYC Charters Deserve a Better Landlord)
As for the president-elect, the outspoken Moskowitz said people should stop rooting for Donald Trump’s failure, while also acknowledging that she voted for Hillary Clinton and was “disappointed by the result of this election.”
Similarly, Loeb, who departed in his own SUV a few minutes after Ivanka Trump on Friday, supported Mitt Romney in 2012 and described this year’s election as the “most disappointing and bizarre in our country’s history” in a pre–November 8 letter to investors. 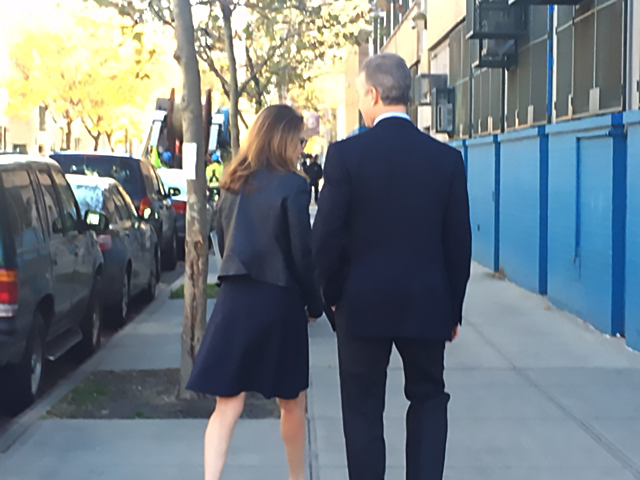 Eva Moskowitz and Dan Loeb walk back toward Success Academy’s Harlem 1 school.
Photo: Mareesa Nicosia
(The 74: Work Inside President Trump’s Ed Department? No Way, Say Some Policy Experts and Advocates)
Disclosure: The 74 Editor-in-Chief Campbell Brown is a Success Academy Charter Schools board member. Dan Loeb is a funder of The 74.