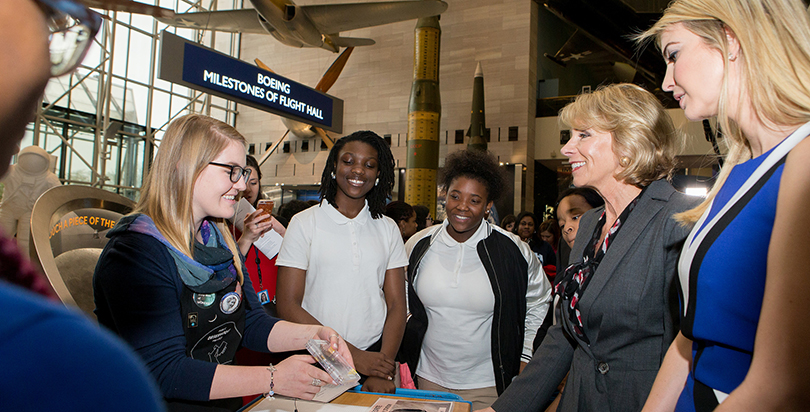 Washington, D.C.
Education Secretary Betsy DeVos and White House adviser Ivanka Trump visited the Smithsonian National Air and Space Museum Tuesday to highlight the importance of STEM education in an event with local middle and high school students and NASA scientists.
DeVos and Trump tied their visit, which also included a screening of the hit film Hidden Figures, to Women’s History Month, particularly focusing on the lack of women in the fields of science, technology, engineering, and math.
Women are 48 percent of the American workforce but only 28 percent of workers in STEM fields, Trump said.
“This statistic shows that we are sadly moving in the wrong direction … I dare you to beat these statistics and advance the role of women in STEM fields. Women’s participation in STEM, where so many of the jobs of the future will come from, is critical in the fight for wage equality and the empowerment of women in the economy,” she said.
Trump said she is trying to do her part, and she and her 5-year-old daughter Arabella will be taking coding classes this summer.
Her father’s proposed “skinny budget” calls for $9.2 billion in cuts to federal education spending, and Politico reported today that the administration is looking to eliminate $3 billion more during the remainder of the fiscal year, including ending a $152 million program to improve math and science instruction.
(The 74: Trump Calls for New School Choice Initiative, Big Cuts to K-12 Budget)
The STEM figures Ivanka Trump lamented are even worse for girls of color, who make up 16 percent of the population but earn just 3 percent of engineering degrees and 5 percent of computer science degrees.
A white paper released last year encouraged STEM programs to think of diverse girls from the beginning, noting that details as simple as how a classroom is designed can turn off girls from science and math programs.
(The 74: New Report Makes a Case: Build Your STEM Program Around Diversity and the Students Will Come)
Both Ivanka Trump and DeVos referenced the president’s recent approval of a NASA reauthorization law that puts a new emphasis on human exploration of Mars.
“You here represent the future for this nation … and I know that there’s probably someone in this audience who’s going to be part of that important mission” to Mars, DeVos said.
The students in the IMAX movie theater were polite but seemingly bored, becoming more animated when they started an activity in which they used wires and beads to write their initials in binary code ahead of a screening of Hidden Figures. The Oscar-nominated movie tells the story of three African-American women working at NASA in the 1960s, confronting racism and sexism while playing key roles in John Glenn’s first successful space orbit.
(Tucker Haynes: Why ‘Hidden Figures’ Should Be Required Viewing at Every U.S. School)
“The women in this movie, Hidden Figures, show that it doesn’t matter whether you’re a boy or a girl, whether you’re black or white, you can be great at whatever you do, so long as you believe in yourself, you work hard, and you stay true to your convictions,” DeVos said.
Before the prepared remarks, the students, and then DeVos and Trump, toured exhibits on living and working in space, black holes, and moon rocks.
DeVos and Trump may have been the draws for the press, but the 200 or so students in attendance seemed much more excited to hear from astronaut Kay Hire, who has flown two missions to the International Space Station.
The space shuttle was considered a crazy idea when it was proposed in the 1970s, Hire said, but humans have been going to outer space the same way ever since.
“I think it’s about time we get some new ideas, and I see a lot of folks in this audience who could be the ones to bring us these ideas,” Hire said.
The students also met three “modern figures”: female scientists at NASA. Each told the students about the hurdles she had to overcome to achieve a STEM career.
• Sandra Cauffman, deputy director of the earth science division, grew up poor in Costa Rica and had a college counselor tell her she couldn’t study to be an engineer because of her gender.
“Even with all of that, I overcame all of those things and I kept dreaming,” pushing her way through school and to the U.S. to work on space programs, an ambition she’d had since childhood, Cauffman said.
• Andrea Razzaghi, deputy director of the astrophysics division, attended D.C. public schools, like some of the students in the audience, and liked to tinker with power tools at home. She credits her father for never telling her only boys could do that.
Now she leads a team looking at “perhaps the biggest questions humans have ever asked”: whether there is life outside Earth, she said.
• Aprille Ericsson, capture manager at NASA’s Goddard Space Flight Center in Maryland, grew up in public housing in Brooklyn. Even if your family doesn’t have a lot of money, you can apply what you’ve learned in school to achieve your dreams, she said.
Submit a Letter to the Editor
March 28, 2017