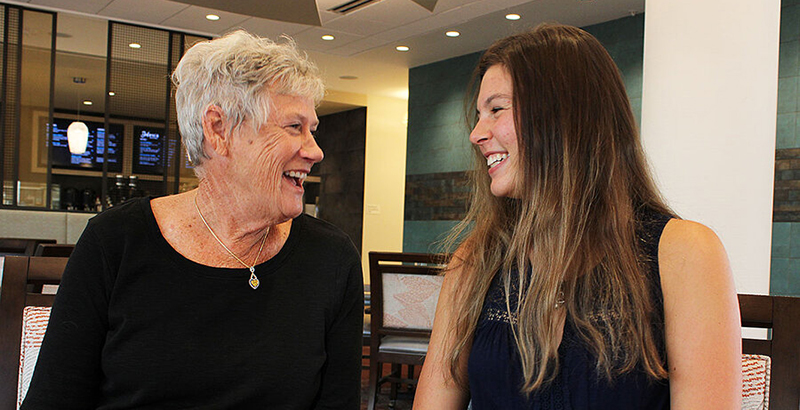 Ruth Jones lives on top of the world – her world, anyway.

From nine stories high, she can gaze down at a sun-smothered, urban Arizona sprawl featuring a school she began serving in 1981 – the top of an auditorium here, her last faculty office there.

The former political science professor is so fond of Arizona State University that she retired on campus.

“One of my former professors said, ‘Stay on campus as long as you possibly can. … Because those students will keep you young,’” she recalls. “I realized the wisdom in what he said.”

Dr. Jones lives in a high-end, intergenerational senior living residence that opened on the Tempe campus last year. With perks like access to classes and campus IDs, Mirabella at ASU is billed as an immersive alternative to traditional lifelong learning. Retirees here are convinced they have more to give, rejecting a mindset of decline for one of usefulness and growth.

Take Karen Busch, for example. She’s embracing life at Mirabella after tough pandemic months and the death of her husband.

“I feel now like I have a much better purpose again to life,” says the senior with spiked, rose-colored hair.

Christine Hudman Pardy had achieved the artist’s dream: a passion-filled career and financial stability. But when the pandemic hit and she lost it all, she turned inward to face her external circumstances.

But seniors aren’t the only ones benefiting.

Pencie Culiver and Deven Meyers both wear thick watches on their left wrists. At Mirabella’s street-level bistro one October afternoon, they joke around as if pals forever – no matter their ages are decades apart.

Mrs. Culiver, a Mirabella resident, shared burgers with her future husband at ASU football games in the ’60s. Now back living on campus, she and Ms. Meyers, an ASU student, sometimes do double dates.

“She energizes me. She gives me hope for the future,” says Mrs. Culiver of her new friend.

They were paired through an intergenerational “pen pal program,” though they prefer meetups over missives. As director of lifelong university engagement, Lindsey Beagley is tasked with promoting such cross-campus exchanges.

“I do think part of my job is to challenge assumptions on both sides, right? About the different generations,” she says.

“We believe strongly at ASU in the idea that we should all be lifelong learners,” says Morgan Olsen, executive vice president, treasurer, and chief financial officer of the school.

Mirabella’s couple-hundred residents, ages 62 and older, are largely white and presumably well-off. (Entrance fees range from $382,400 to over a million dollars, on top of monthly service fees up to $7,800.) Some residents have moved there from across the country, while several have ties to the university as alumni or former employees, like Dr. Jones, who mentions enjoying an undergrad course on world religions and recreational art classes at Mirabella.

“They say to get outside your comfort zone,” she says at home, enthroned on a yellow leather recliner. “No greater discomfort than taking a watercolor class.”

By staying on campus, Dr. Jones also gets to witness her professional legacy unfurl. As the first tenured woman in the political science department as well as the first to serve as its chair, she recruited several women to ASU during her career – a point of pride for the retiree.

“It’s not hard to recruit good women,” she says. “It’s hard to create the environment that will help them succeed,” adding that she maintains casual meetups with some of the women still there.

Down the hall lives Dr. Busch, with the short, soft-pink hair, a retired director of faculty development who moved from Michigan. This spring she launched a weekly conversation group in Spanish that she hopes more students will join.

Another Mirabella resident, Richard Ruff, who, with his wife, Janet Spirer, divides his time between here and San Diego, also connects with students on academic topics. A retired organizational psychologist, he mentored students this past semester through the Center for Entrepreneurship. Along with helping him feel purposeful, the gig afforded him welcome insight into kids these days.

A growth path for campuses?

One estimate counts around 100 higher ed-affiliated retirement sites. But Mr. Carle, who coined the term “university-based retirement communities” (UBRCs), says only three or four dozen projects meet most of his criteria.

The ASU model is unusual for its on-campus location and close affiliation with the school, he adds. Boston-area Lasell Village is another example, where residents on Lasell University’s campus commit to at least 450 hours of enrichment a year.

“I said to one university president … ‘You can hopefully start giving birth to baby geniuses who start college at age 5, or you can recycle your old customers.’”

ASU leases the nearly 2-acre site to a joint venture managed by Pacific Retirement Services. The 99-year land lease cost around $7 million up front, plus the joint venture pays a semiannual fee.

As a life plan community, Mirabella offers multiple levels of care. Beyond the 238 independent living residences, a few dozen units are dedicated to assisted living, skilled nursing, and memory care, though the latter hasn’t opened yet due to industry-wide staffing shortages.

Other growing pains stem from its location. In October, Mirabella filed a lawsuit against Shady Park, a live music venue across the street, asking Maricopa County Superior Court for an injunction to keep it from emitting noise above local limits.

Mirabella alleges the venue’s noise and vibrations have caused “substantial personal harm” to residents, though the city says the venue, which predates Mirabella, hasn’t been cited for noise violations. A judge denied Mirabella’s request for a temporary restraining order last month.

“Discovery is ongoing but we are confident that when the facts are developed they will confirm that the sound created by music at Shady Park is reasonable and appropriate,” emailed Shady Park spokesman David Leibowitz.

Despite some friction, having both retirees and college-age concertgoers wanting to call Tempe home is “a great problem to have,” says Deputy City Manager Rosa Inchausti.

Senior advocates agree that the benefits of proximity outweigh the hiccups.

“For whatever reason, in Western culture, we kind of push older adults to the side like they’re no longer useful,” he says. “The more intergenerational opportunities that we have where we’re connecting younger adults to older adults, I think the better the understanding is.”

To encourage that interaction, Mirabella pays room and board for four student musicians-in-residence. In exchange, they dedicate at least two hours a week to performance or other programming, like lessons.

At a late-summer Mirabella happy hour, musician-in-residence Michelle Kim was playing the piano when she says a man encouraged her to choose a favorite tune of her own. A couple months later, she still recalls the group’s applause as her fingers sank into the opening keys of “Autumn Leaves.”

“They’re so compassionate,” says Ms. Kim, who’s pursuing a doctorate of musical arts. After months limited by COVID-19, “it’s so nice to have a regular audience – and your fans.”

“I’m just so grateful to work with the residents,” she adds. “They’re literally like my grandparents.”

It’s a familiarity similar to what Ms. Meyers and Mrs. Culiver share. As they prepare to leave the Mirabella bistro, the two mention a plan to reunite for sandwiches soon.

Then they hug goodbye.

This originally appeared at The Christian Science Monitor and is published here in partnership with the Solutions Journalism Exchange.

Sarah Matusek is a staff writer at The Christian Science Monitor.