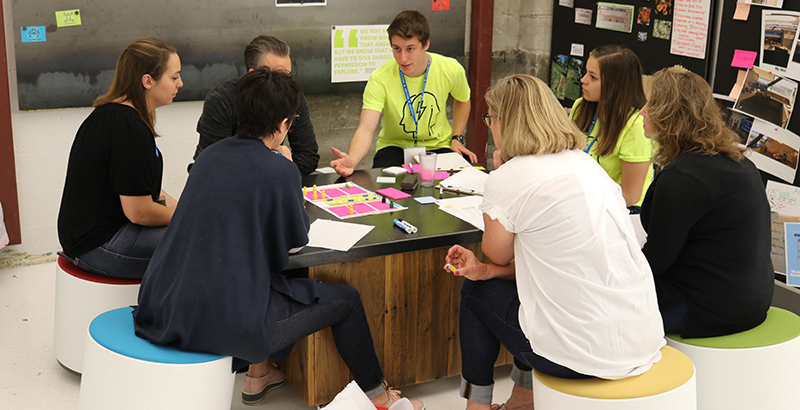 Students from the One Stone school in Boise, Idaho, gather with adults in what’s called a CrashUP session, where they design solutions to workplace challenges. (Photo credit: One Stone)

Take 30 initially skeptical engineers, designers, and accountants from a large manufacturing company and put them under the direction of 15- and 16-year-old high school students for a half-day brainstorming session, and what do you get?

If the kids come from Boise, Idaho’s One Stone school, the answer is a group of impressed and inspired adults.

That a team from RedBuilt, a national building materials manufacturing company headquartered in Boise, ended up hiring a group of students to lead it through a complex and high-stakes design thinking workshop speaks volumes about the effectiveness of the school’s unique approach to teaching and learning.

By inspiring students to uncover and pursue their passions, and to direct their own learning, One Stone prepares kids for the uncertain but exciting future they face.

As automation and artificial intelligence transform the world of work in the coming years, our schools must transform themselves as well to prepare students for this new reality.

A report I recently co-authored calls this new era the Age of Agility. Many of today’s students will not have careers or work in jobs as currently defined. Instead, they’ll go from “gig” to “gig,” like itinerant musicians, using whatever talents or skills they possess to perform tasks for others on a contract or freelance basis.

This means they will have to be adaptable, nimble thinkers, committed to a lifetime of learning, relearning, training, and retraining.

One Stone is one of the few schools I’ve seen anywhere that has gotten ahead of this curve.

It is an independent, nonprofit, tuition-free school located on the edge of downtown Boise. Now in its second year of operation, One Stone has an enrollment of 70 10th- and 11th-graders. The school doesn’t track the student body’s ethnicity or income, and doesn’t charge tuition because “a core value for us is equality of voice,” says Neva Geisler, One Stone’s community engagement director. But One Stone’s socioeconomic and racial diversity “exceeds that of the Treasure Valley [where Boise is located],” Geisler said.

The school’s lead funder is the Boise-based J.A. and Kathryn Albertson Family Foundation. It receives smaller donations from other area foundations, corporations, and individuals, and also brings in a chunk of revenue from its Two Birds business. 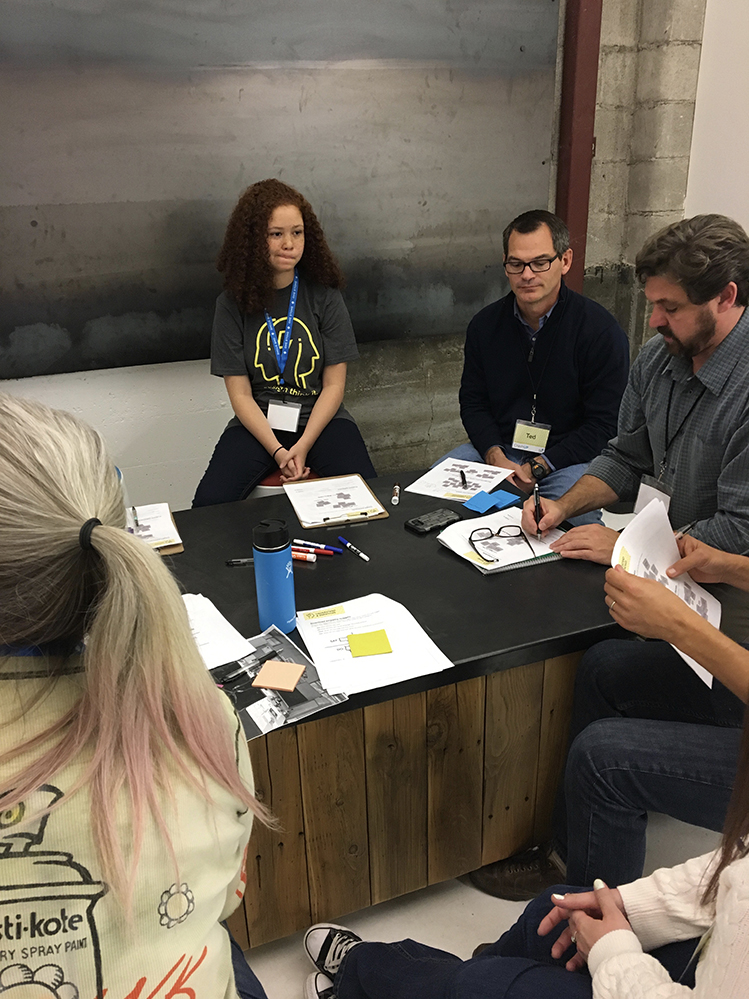 Viveca Beall (center), a first-year student at One Stone, participates in a CrashUP brainstorming session with One Stone coaches and employees of RedBuilt, a building materials manufacturing company trying to improve its internal communications. (Photo credit: Alan Gottlieb)

In the jargon-laden, fad-prone world of education, many schools and programs these days describe themselves as student-centered or student-led. Few if any walk that talk to One Stone’s extent.

The school’s board of directors is chaired by a student, and the majority of its members, under its bylaws, must be students. Classes and courses of study are designed jointly by coaches (adults who would be called teachers at most schools) and kids.

Students spend at least as much time outside the school’s walls as inside, using the city as a classroom, participating in internships with local businesses, and undertaking self-designed service projects.

Even though the school is in just its second year, its methods and philosophy are deeply ingrained in those students who have been involved for years in its after-school programs.

As a result, One Stone students display a level of self-confidence and maturity rarely seen in the halls of a traditional high school.

That’s why leading a group of balky RedBuilt employees through a design thinking process didn’t appear to faze even those students who had never before run a “CrashUP,” as the school calls its workshops.

One Stone wants its students to stretch themselves, and to “fail forward.” That’s why even high-intensity, high-stakes programs like CrashUPs are jointly led by a team of coaches and students. It gives the students a safe environment for learning on the job.

Via @edsurge @onestoneidaho "Vulnerability leads to inclusive groups, deeper friendships, a high level of creative collaboration & a willingness to “fail forward” (or to learn from failure)." https://t.co/N0aOGb4vUK

At 12:30 p.m. on a wet fall Friday, the group of 30 adults from RedBuilt arrived at One Stone’s bright and open building, a former pathology lab.

The body language exhibited by some of the adults suggests they harbored doubts about just what they were doing here, and why.

“I had to beg, bribe, and finally order some of them to be here,” acknowledged Cornelia Sprung, a RedBuilt design center leader who directly supervises most of the participants. “I had a bunch of people decline the initial invitation, or ask if it was optional. So, I had to make it mandatory.”

CrashUPs follow a prescribed set of steps to get participants to relax and grapple with tough challenges. In the case of RedBuilt, issues of communication between designers and engineers had begun to stymie creative collaboration.

Students and coaches had to get the group in the collective frame of mind to talk about the problems honestly and openly with supervisors and with colleagues they didn’t in some cases know well.

Students led teams of RedBuilt employees through quick one-on-one interviews with colleagues, with guiding questions intended to tease out the collaboration challenges the company faces.

The idea was to build an “empathy map,” because fostering empathy is a key component of design thinking.

The rest of the day was spent devising solutions by crafting problem statements, “how might we” statements to “spark ideation,” then design physical prototypes to test ideas (a physical model, a storyboard, a wireframe, or a role play). After feedback, prototypes were revised.

Two extraordinary facts stood out to someone observing the process unfold. First, the RedBuilt employees’ skepticism melted away within minutes, and they became fully absorbed in the activities. Second, the students led groups with a self-assurance that belied their years and lack of experience. They had been well prepared by their coaches.

“Don’t jump ahead to ideation yet. We need to find some common themes first,” junior Tessa Simonds gently admonished her group when they started rushing through a key part of the process. They quickly fell in line.

As the design thinking workshop wrapped up, participants were asked to come up with a headline to describe the day.

Sprung, the RedBuilt manager, said the day had exceeded her high expectations. “The students are awesome. You can tell they are creative thinking experts,” she said. “They are great team leaders. I can guarantee we will use some of the ideas we developed today.”

Once the group departed, the students sprawled on One Stone’s modular furniture for an informal debrief.

“At first I didn’t feel comfortable telling adults what to do,” said sophomore Claire Westergard. “But by the end, they looked up to me because they could tell I understood the process.”

Disclosure: Alan Gottlieb helped the J.A. and Kathryn Albertson Family Foundation set up Idaho Education News in 2013 and now sits on its board. The site was modeled on EdNews Colorado, which Gottlieb founded and which later merged with Gotham Schools to form Chalkbeat. The Albertson Foundation also supports the One Stone school.

Watch: Parents and Experts Talk About How the Pandemic Led Families to Leave Their Schools — and Reshaped Their Expectations of the Education System