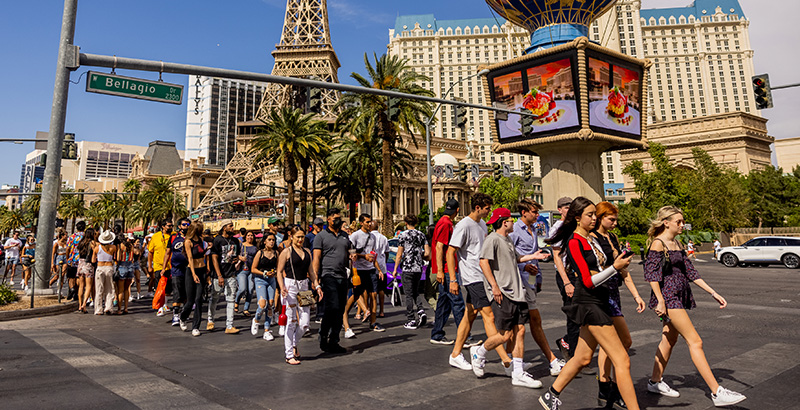 Pedestrians walk along the Las Vegas Strip on May 1, 2020. (Getty Images)

After a night with friends at a Las Vegas casino, she was dropped off at a nearby Walmart and planned to walk home. But Mihalik, 54, didn’t realize the area had no public transportation available. As a legally blind person, this presented a major issue, but she decided to get home by walking along the side of the road, which didn’t have a sidewalk.

Next thing she knew, she was in the hospital with six pelvic fractures. A vehicle had struck her from behind, and she didn’t wake up until the following morning. “I was happy to be alive,” Mihalik said.

Walking can be dangerous, depending where you live. In Mihalik’s case, Nevada is ranked eleventh in pedestrian fatalities, according to a report by Smart Growth America. And Clark County, which includes the Las Vegas metro area, recorded 78 pedestrian deaths in 2017— the highest in county history.

Erin Breen, traffic safety coalition coordinator at the University of Nevada, Las Vegas, said the built environment was constructed for vehicles, not people.

This pedestrian-unfriendly environment also exacerbates inequality. In the Las Vegas metro, the people most likely to walk as a primary mode of transportation tend to be low-income. And in a state where traffic infractions are considered misdemeanors, a jaywalking violation can cost nearly $250 in fines and could even land you in jail.

“A lot of times when you hand them a ticket, you are handing them a warrant for their arrest,” Breen said.

That’s why Breen and Laura Gryder, project director at the UNLV School of Medicine, teamed up in 2017 to create PedSAFE, an organization that teaches pedestrian safety classes. It operates autonomously under the Vulnerable Road Users Project in the Transportation Research Center at UNLV and works with local courts and law enforcement.

The program, previously held in person and now online because of the pandemic, allows people to dismiss pedestrian-related citations and fines — as a walker or driver — by sitting in a three-hour educational course. Taught three times a month by Breen herself (and once a month in Spanish), the free course addresses case studies and historical data on pedestrian crashes, provides an overview of local laws, and offers do’s and don’ts for walkers, bikers, and drivers. At the end, in addition to having their pedestrian tickets dismissed, participants receive reflective vests and slap bands. More than 2,800 people have graduated from the course since 2017. According to data provided by PedSAFE, most people who leave the course have a better understanding of pedestrian safety and pedestrian rights.

PedSAFE typically serves 100 to 200 people per month, but with traffic court closed due to the pandemic (felony charges are still being seen), fewer violations are being enforced and attendance is down to 25 people per month.

After Mihalik’s accident, her attorney and the driver ended up settling the case. As part of the settlement, Mihalik was required to attend the PedSAFE pedestrian safety course. “I think all people should be required to take this course to get a driver’s license,” she said, citing “wear bright-colored clothes” as a safety tip she had never thought about. She’s unsure if the driver who hit her was ordered to take the course too. She places part of the blame on herself for having worn all black at the time of her accident.

But advocates warn that the cause — and not just the symptoms — must be treated.

Angie Schmitt, former national editor at Streetsblog and author of Right of Way: Race, Class and the Silent Crisis of Pedestrian Deaths in America, says programs like PedSAFE are useful for reducing fines, but in general, she doesn’t see the value in enforcing jaywalking laws.

“[Local governments] are punishing the individual for a systemic problem,” Schmitt says. Enforcement is often racially biased, and many people jaywalk because streets don’t have accessible crosswalks in the first place.

On March 1, the state of Virginia decriminalized jaywalking and reclassified it as a secondary offense — meaning people won’t be ticketed unless they’re violating another law. The change also reduces unnecessary interaction with the police. “As long as jaywalking was a primary offense, it was going to be a big source of harassment,” Peter Norton, associate professor of history in the University of Virginia’s Department of Engineering and Society, told NBC 12.

Decriminalization is also being considered in California. In March, California State Assemblymember Phil Ting, who represents part of San Francisco, introduced the Freedom to Walk Act (AB1238), which would legalize safe crossings against the traffic light or outside the crosswalk, and eliminate jaywalking fines. Ting cited the 2018 killing of Chinedu Okobi, a Black pedestrian Tased and beaten by police officers during a jaywalking stop, and heavy fines as evidence of the bill’s urgency.

“It’s easy to send police out and feel like you’re solving a problem,” Schmitt says. “It’s harder to think about how streets are laid out and what problems are inherent to the environment.”

Even as the city of Las Vegas has lowered speed limits and added buses in some areas, it still has a long way to go until it’s safe.

“Until we give pedestrians reasonable places to cross the street and we lower the speed limit to something survivable,” Breen says, “humans will be human.”

Taylor Moore is a contributor to Next City.