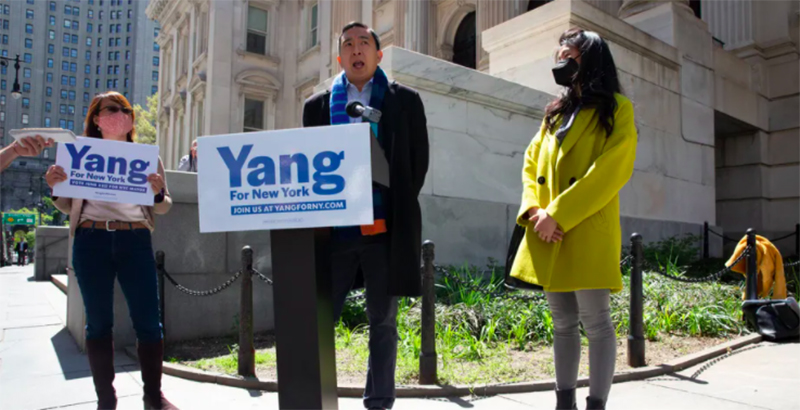 Mayoral candidate Andrew Yang advocates for reopening city schools during a press conference in front of Department of Education headquarters, May 11, 2021. (Ben Fractenberg / THE CITY)

This story was originally published May 12 by THE CITY.

With many public schools still offering part-time in-person learning or no live instruction at all, some mayoral candidates are casting for votes from frustrated parents — and finding a tricky test that’s not so easy to pass.

At the head of the class: Democrat Andrew Yang, who has been advocating for schools to fully reopen for all students, five days per week come September — making it among his campaign priorities.

Yang set course in March, when he complained a return to in-person learning following a pandemic move to remote instruction was happening too slowly. He faulted the teachers union — only to later pin the blame squarely on Mayor Bill de Blasio when unsuccessfully seeking the United Federation of Teachers’ endorsement.

Rival Maya Wiley followed with a call for every school to immediately open “in person, five days a week.”

The CDC say it's safe for students to return to the classroom full time with proper protocols in place. I'm calling on the Mayor and Chancellor to open schools and let every one of our kids learn, with their teachers, safely and in person 5 days a week. https://t.co/UIS8AKoJxU

Along with candidate Kathryn Garcia, Yang joined parents rallying on May 1 to fully reopen schools.

They were countered by protesters who demanded reforms for safety and equity before more children return to classrooms, noting that families of a majority of city public school students — about 60% — have chosen remote learning.

And last week, Yang held his own campaign event in front of Department of Education headquarters at the Tweed Courthouse on Chambers Street to highlight his commitment to reopening.

“Our kids deserve a very clear vision of reopened schools five days per week, and then a plan to get us there,” Yang said in criticizing de Blasio.

But he acknowledged under questioning from reporters that he, too, hasn’t created a plan.

Like de Blasio, he wants to fully reopen schools five days per week, but is not offering details for how to do it.

Also like de Blasio, he won’t say whether students — including those in communities ravaged and traumatized by the coronavirus pandemic — should continue to be offered the option of fully remote instruction come the fall, as they have for the past year.

“My focus is on getting kids back into the classroom,” Yang said. “I can guarantee that if I am the next mayor, we’ll have a plan well before I take office.”

Some mayoral candidates have angled to keep both pro-school-opening and opening-concerned parents happy: They say reopen school buildings fully — but keep a remote-learning option available.

“While we hope all our students come back in-person, and the mayor should be rebuilding trust with families to make this possible, the city should also be developing a high-quality, well-planned, well-supported remote school option for students and families who so choose, so we do not yet again end up in a scramble at the beginning of next school year,” said Yuridia Pena, a Donovan campaign spokesperson.

The heads of the teachers and principals’ unions also say that providing a remote-learning option will be a necessity.

Garcia, a former Sanitation commissioner, backs remote learning as a possibility for high school students and in other “limited circumstances,” according to officials with her campaign. They declined to elaborate.

The campaign of former Citibank executive Ray McGuire said accommodations should be made for students with medical conditions and “other factors as necessary,” but that the default would be in-person learning.

The campaign of Dianne Morales, a former nonprofit executive, didn’t respond to inquiries.

But while many candidates have demanded continued remote learning even as virus infection rates dwindle, de Blasio has begun to back away.

The mayor initially said in March that he expected virtual instruction to be offered for some students come fall. Since then, however, he and Department of Education officials have repeatedly declined to say whether fully remote learning will actually happen.

On May 7, he declined to answer again when asked on WNYC’s The Brian Lehrer Show.

“We’re planning for every child to be back. We will pay attention in the meantime to what happens with the health care situation, what our health care team says, we’ll certainly be engaging parents, but it’s plan A,” the mayor said. “Plan A is every single child back in school.”

A full return to school buildings would resolve a pile of remote-learning problems.

Last year’s bumpy transition to remote learning suffered from a host of problems that included lack of sufficient tablets and Wi-Fi access. Staffing issues also emerged as schools had to find enough teachers to cover different groups of students coming to classrooms on different days during hybrid learning, on top of the remote option.

Some parents and students were also upset to learn that many middle and high schools were teaching remotely even when students were in classrooms — an approach derided as “Zoom in a room.” One reason: 28% of teachers have received pandemic medical accommodations to teach remotely through June 30.

But a full return to in-person learning will also require newly recalibrated safety measures that have yet to be determined. Disruptions to in-person learning were a frequent headache for parents and students until the city last month stopped closing entire schools when just two unrelated COVID cases popped up in the building. With a threshold now at four cases, no schools are currently closed.

City Councilmember Mark Treyger (D-Brooklyn), a former educator, said that while schools have been relatively safe when it comes to COVID cases, the city bungled the current school year to such an extent that many families have no confidence in declarations of safety.

“The reality is, New York City parents and families should not be punished for lacking trust in a system that was not very collaborative and transparent — certainly at the rollout of the multiple starts to the school year,” said Treyger, who chairs the Council’s education committee.

East Harlem mom Kaliris Salas said that reality — combined with the disproportionate impact of COVID on Black and brown communities like hers — is getting overlooked by those most ardently pushing for schools to reopen.

Salas, the Community Education Council president of District 4 in Manhattan, helped organize the counter-protest that greeted Yang and Garcia at the May 1 rally. The candidates were invited by a group called Keep NYC Schools Open and the Harlem Jets, a local student sports organization.

Salas noted that her neighborhood had higher than average rates of COVID-related deaths than the rest of the borough, while it has among the lowest vaccination rates.

She said the families need to hear more about safety protocols before they’ll consider sending their kids back to school.

“We have a lot of kids that were OK and now they’ve lost nine, 10 family members and are anxious about going into school buildings,” said Salas, who has a son in fourth grade at Central Park East 1 elementary school.

“A lot of Black and mixed families, a lot of immigrant families, have chosen to stay remote because that’s the safest option for them,” she added.

Daniela Jampel, 37, helped found Keep NYC Schools Open after all schools shuttered in November as COVID rates rose. She said her now 7-year-old daughter was traumatized by the challenges of learning remotely largely on her own, and by the uncertainty of whether school would be open for in-person instruction.

She said her daughter attended just two days of school in January after elementary buildings reopened — but is finally flourishing since returning to school full time in late April.

“This year has been for me and for my children and for many parents and many children the hardest year of our lives,” said Jampel, who lives in Washington Heights.

She said it makes sense for remote learning to continue to be available for students with medical needs. But she added she believes children affected by the fear surrounding COVID could be supported at schools by mental health professionals, social workers and guidance counselors.

“By having an on-demand remote option, the city is reinforcing the idea that our schools are unsafe, and I don’t think that’s true,” said Jampel. “I think it’s important for as many children as possible to have an in-person learning experience.”

Meanwhile, a group of over two dozen public school parents sought a court injunction last week against the city, de Blasio and Schools Chancellor Meisha Ross Porter seeking to compel them to resume in-person instruction for all students five days per week.

The parents say city officials are depriving their kids of the right to a sound, basic education that’s guaranteed in New York’s constitution.

United Federation of Teachers President Michael Mulgrew is among those who say the biggest obstacle to a return to in-person learning is the reluctance of families. He added that the issue isn’t getting enough attention from de Blasio — nor from some of the mayoral candidates pushing to fully reopen schools.

“An idea is one thing — how do you actually make it work? How do you help people get to that comfort level with so much fear and anxiety built into what we’ve been through?” said Mulgrew. “That’s what we need to hear about. Not ‘I want to open the schools fully.’”

He urged the city to host open houses at schools in the coming weeks to begin to address the anxiety of families and teachers, and he’s advocating for a public campaign to help convince families the schools are safe.

Mulgrew said remote learning should be offered by application rather than by opting in, with criteria such as medical necessity. He suggests a goal of capping enrollment at 10% of students. And he wants such a program run centrally rather than by individual schools.

Principals union president Mark Cannizzaro said most of his membership would prefer to program their own virtual instruction, except when it makes sense to combine resources because of a shortage of teachers in certain subjects.

He’d like to see all students return in person come the fall, but he understands why some families would choose remote learning.

“I would love for us to get to a point where that’s not an option, because I think kids belong in school,” he said. “I just don’t see the ability right now to not have that option.”

Both he and Mulgrew emphasized that no matter what de Blasio decides, he needs to pull the trigger soon — or else the delays that plagued the opening of the 2020 school year would repeat again this September.

“The key is we can’t wait — we can’t wait for this decision to be made,” said Cannizzaro. “You’d think the lessons of the past would have informed them going forward. But apparently they haven’t.”

Yoav Gonen is a reporter for THE CITY, covering city hall.