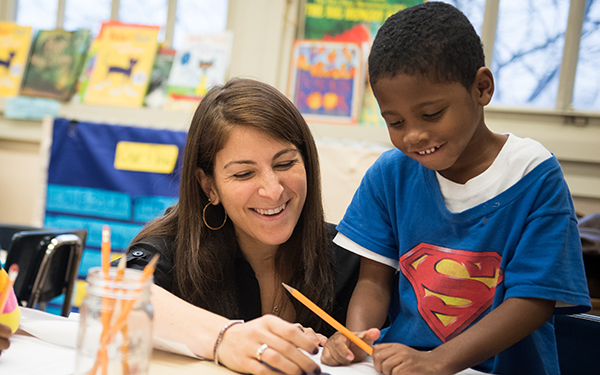 Teacher Kelly Reyes works with a student at P.S. 314, the Fairmont Neighborhood School, in the South Bronx. (Photo by: Brian Hatton)
One recent afternoon, visitors stopped by the classroom where Kelly Reyes and Newton co-teach  during a phonics lesson. A girl wearing a red hair bow led the class through a pronunciation, pointing an owl finger puppet at the syllables as the students chanted along from their seats on a carpet.
When a child answered a question correctly, the entire class was encouraged to praise her aloud.
“The other children seem to want that praise also, so most of the time they fall in line,” said Reyes.
While some teachers at first resisted the intense training, most eventually embraced it, Principal Scott Wolfson said. He recalls little — if any — structured professional development offered when he arrived about two years ago, after being recruited by the New York City Department of Education.
What he did find was that many brand-new teachers were struggling to manage children with extremely limited educational experiences, said Wolfson, a 21-year educator. Staff morale was low; the hallways and cafeteria were loud and chaotic.
“Our school was really struggling with behavior and structure,” Wolfson said. “If the school continued on the track that it was on, no instruction would happen because it was pretty dangerous when I arrived here.”
As it did then, P.S. 314 operates under the same roof as P.S. 50, a former Turnaround partner school, which the city education department is preparing to close.
Meanwhile, P.S. 314 will add a fifth-grade class this fall. It now has about 300 mostly black and Latino students in grades pre-K-4, and almost all of them qualify for free or reduced-priced lunch, a measure of poverty. The school ranks well below the citywide average on performance measures like student proficiency on state tests and whether teachers believe order and discipline are maintained, according to 2014-15 data from Inside Schools.
Despite this sobering reality, a lot has changed at P.S. 314. A relative sense of calm has settled through the hallways of the century-old building. More students report feeling a sense of physical and emotional security in school, according to a student survey conducted by Turnaround.
“Many of my teachers are very caring about their children, but having Turnaround has helped them to care and to develop structures to allow children to be successful in their classrooms, and that’s one of the things that was really missing when I arrived here,” Wolfson said. “If you don’t have structures in place, then children cannot be successful.”
Elsewhere too, some early indicators of the program’s success have surfaced. Schools that Turnaround has partnered with since 2011-12 became more orderly, harmonious places. Between 2011 and 2014, “severe” incidents — violent or disruptive behavior reported by schools — decreased 42 percent and suspensions decreased 49 percent, according to Turnaround data.
At the same time, 85 percent of schools showed improvement in students’ “interpersonal self-regulation,” which relates to their ability to control emotions like anger and show patience, according to 2014-15 Turnaround data. The percentage of teachers who are “highly rated” in classroom climate, productivity and engagement rose 23 percent, while 98 percent of students referred for mental health services had an intervention plan in place, the data shows.
As Cantor and her team look to broaden their scope, they are exploring a potential collaboration on programming with the Yale Center for Emotional Intelligence. A research partnership with faculty at the Harvard Graduate School of Education and the American Institutes for Research may also be in the works.
Cantor hinted that the organization is also looking for ways to expand districtwide partnerships in D.C. and New York.
Turnaround is building on its past work just as a national push toward measuring students’ social and emotional skills climbs into higher gear. Under the new federal education law, the Every Student Succeeds Act (ESSA), states are now required to test students on at least one non-academic measure, such as school climate and safety, student engagement or access to and participation in advanced coursework. The law leaves it up to states to decide how to measure these skills and which ones matter most.
(Related: The 74: The Happiness Factor: Research Moves Beyond Test Scores to Find Strongest Teachers)
Former U.S. Deputy Education Secretary James Shelton III, an advisor and friend of Cantor’s for several years, said he believes the work she’s leading at Turnaround “has the power to be transformational.”
As schools increasingly look for resources to help them identify and measure these non-cognitive skills, more people may turn to the “Building Blocks for Learning” framework that Cantor has championed, said Shelton, who is now president and chief impact officer of 2U, which works with universities to offer online degree programs.
It could also trigger an important shift in the conversation among education reformers that has predominately focused on academic outcomes, particularly high test scores, he said.
“Pam’s work is important on two fronts: The first is that she has unified a conversation around social and emotional learning, the growth mindset and other elements of what has been poorly named ‘non-cognitive skills’ — she’s pulled that together in a way that makes it accessible and actionable for the people in education,” Shelton said.
Secondly, she’s done it in a way that “hopefully will end an unproductive conversation that creates a false choice between academic rigor and these other skills and recognizes that these are connected and unified,” he said. “My hope is that Pam will be a unifier for the education community through this work.”