How to Stage a Successful Teacher Strike in 4 Easy Steps 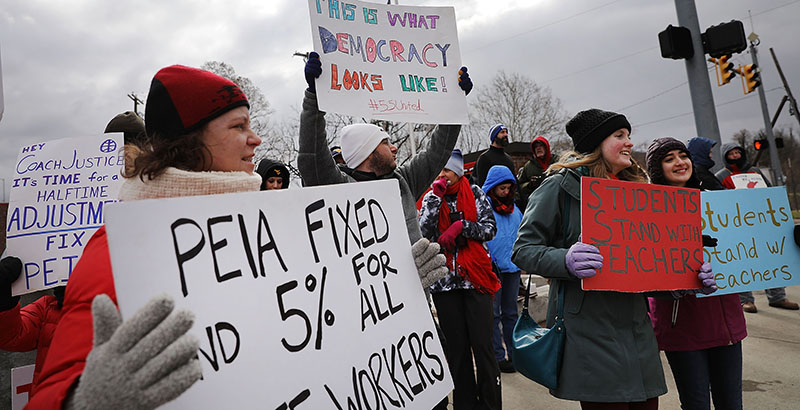 Once public education employees in West Virginia received a significant pay increase after a statewide walkout, it was inevitable that their colleagues in other states would follow suit. We have seen long walkouts in Oklahoma and Arizona, as well as short job actions and rallies in Kentucky and Colorado. We saw another May 16 in North Carolina.

Analysis — A Reality Check About the Education Labor Arms Race: Oklahoma & W. Virginia Are Not Game Changers. Neither Is Janus

In West Virginia, education employees received more than what was offered before the strike began, but not so much after the wildcat strike that kept teachers out though their union leaders directed them to return to work.

The threat of a walkout induced the Oklahoma legislature and governor to agree to a large pay increase. The walkout went ahead anyway, but it ended without any further substantial gains.

Similarly, in Arizona, teacher activism prompted the governor to offer a large pay increase. The legislature approved the governor’s plan during the walkout, but nothing more.

School administrators and legislators across the nation are being irresponsible if they are not trying to learn from what has happened in the walkout states. Union officers and grassroots organizers planning walkouts in other states can also learn from the mistakes of those who went first.

Besides the mundane but crucial tasks involved with organizing, here are four important steps for planning a successful teacher walkout:

1 Stick to one immediately achievable demand.

No one, least of all West Virginia educators, cared that the state created a task force to address health insurance coverage. They cared that they all received a 5 percent raise. Oklahoma educators did not go out on strike so that tribal casinos could offer roulette and craps. They went out because they wanted a big pay increase. They got it.

“Achievable” does not have to mean modest. Arizona strikers received a 20 percent raise, which is a lot no matter what job you have. But they also wanted “competitive” pay for education support workers. What is competitive, and who would make that determination? They demanded no new tax cuts until state per-pupil funding reached the national average. Even if you think that is a good idea, how was that to be achieved in a way to end the walkout?

The tendency is to want to get as much as you can after you have engineered such a giant event. But you are more likely to see diminishing returns, and you can end up splitting your movement over secondary issues.

2 Get superintendents on board.

We might not be talking about statewide walkouts if any of West Virginia’s 55 county superintendents had decided to keep schools open. Their decision to close schools ensured strikers would not lose pay, and it also cut off any employees who might have wanted to go to work. One observer correctly noted that the West Virginia strike was also a sort of lockout.

The Arizona strike might still be going on except that while teachers were still being paid, education support workers were not being paid while schools were closed.

“We were getting a lot of pressure from all sides to respond to this budget and to go back to our classrooms,” said Arizona Educators United co-founder Noah Karvelis. “And if we stayed out to try to force a special session, classified staff — who don’t get paid during a walkout — would continue not to receive any checks.”

Education employees walk out because they want more money. They can stay out forever if they are still getting paid. Once pay is cut off, each individual is forced to do a personal cost-benefit analysis of continuing to strike, regardless of whether its aims have been achieved.

3 Know when to declare victory.

This goes hand-in-hand with Step 1. If you have a single, immediately achievable demand, then you declare victory when that demand is met.

The Oklahoma walkouts ended badly because organizers couldn’t point to a specific action that would constitute victory. The Arizona organizers learned a little bit from this because they defined the passing of the state budget by the legislature as the end point. Some thought that was weak tea, but it was an improvement over Oklahoma.

You can even declare victory before the walkout! There is nothing wrong with being skeptical of politicians’ promises, but if your demand is met before the strike and you walk out anyway, you risk alienating your outside support and raising irrational expectations among the strikers.

There might be a letdown and second-guessing if you call off a job action after so much planning, but go ahead and sacrifice some self-gratification, which leads to the final step:

4 Remember that no one controls a mass movement.

It looks like every walkout state is falling into this trap. Having put together walkouts and rallies of tens of thousands of educators, organizers came to believe these people were now theirs to command or influence.

This happened almost immediately. Organizers in each instance claimed to have gauged support for the start of a walkout by polling teachers or otherwise soliciting their input. But in each case the decision to end the walkouts was made by a small group of insiders. This led to some anger among the rank-and-file.

If teachers joined the walkout, surely they will sign union membership cards or gather signatures for ballot initiatives or vote for Democrats, the reasoning goes. North Carolina Public Radio reported that the demands for this week’s walkout “have not yet crystallized into a cohesive agenda.” That’s not exactly true.

The broader the support, the more powerful the movement. Unfortunately, it also means more people with specific ideas of how to use that power.

The Arizona Education Association and its ally, Save Our Schools Arizona, are at odds over a voucher repeal initiative. The argument has bled into whether SOS Arizona will support the union’s plan for an initiative to increase income taxes. SOS Arizona called it “a little bit more partisan than we would like.”

Meanwhile, that 20 percent raise for teachers may be reduced by school districts so that the money can be spread among all education employees, not just teachers.

It must be a heady feeling to look at those huge crowds of people and know you were instrumental in bringing them together. I’m sure Louis Farrakhan, Bill McCartney and Kalle Lasn felt the same way when they saw the Million Man March, the Promise Keepers, and Occupy Wall Street, respectively.

Hopefully she knows how most of those turned out.