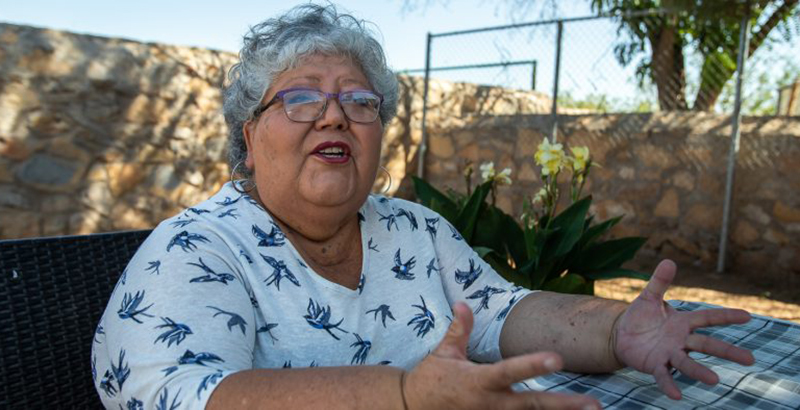 Leonor Terrazas, who recently retired after working as an instructional aide at Ascarate Elementary School for 36 years, sits on her backyard patio on Monday. (Corrie Boudreaux/El Paso Matters)

In the months after being hospitalized for COVID-19, Leonor Terrazas suffered headaches, joint pain and body chills. She was suddenly forgetful and struggled with balance.

The long list of symptoms finally made sense when her doctor diagnosed her as a COVID-19 “long hauler.”

It was then Terrazas, 64, knew she couldn’t return to Ascarate Elementary School this fall, where she spent her entire 36-year career in education, first as a physical education assistant and then as instructional aide in the dyslexia department. As an aide, she was frequently called on to help with crossing guard duties or fill in as a substitute teacher.

“If I couldn’t do the job right — the way I wanted to do it and I’m used to doing what the principal expected of me — then I should let somebody come in there and do the job that’s needed,” Terrazas said about her decision to retire early in June after being on catastrophic leave since February. “Even though it was really sad for me, it was time to let go.”

Terrazas is one of many Texas educators who left the profession on account of the pandemic. Some feared contracting the virus while others were exhausted by the sudden shift to remote instruction.

These early retirements haven’t helped local staffing shortages that existed prior to the pandemic.

The 134 teacher vacancies in the El Paso Independent School District as of Sept. 10 are slightly up from last fall, but still below the nearly 200 openings the region’s largest district had at the start of fall 2019. The Socorro Independent School District, however, had 64 teacher vacancies, up from 26 two years earlier. Ysleta, the district where Terrazas worked, had 33 openings, nearly on par with those from 2019.

The staffing shortage isn’t limited to teachers: districts are down bus drivers, custodians, food service employees and especially substitute teachers. SISD aims to have 900 substitutes on payroll annually — right now, it has about 600 for 49 schools.

Districts partly rely on retired teachers to work as substitutes, but retirees don’t want to risk their health by returning to the classroom.

Tutors can earn as much — or more — working part-time as they could as a full-time substitute. Tutor pay in EPISD, for example, ranges from $15 to $50 an hour while substitutes earn $75 to $100 daily.

Without substitutes, schools have been pulling whoever they can find to staff a classroom, whether that’s a librarian, assistant principal or even principal.

“It cripples the campus a little bit because we have to get all our extra people to cover classrooms,” Borrego said.

In an effort to recruit new substitutes, SISD has boosted pay rates by about $25 an hour and lowered the hiring requirement from 60 to 30 college credit hours to attract current students. It’s also offering a $500 retention incentive for substitutes who work at least 100 days — slightly more than half the school year.

Hiring new staff has become more difficult over the past decade as fewer teachers enter the profession, said Desiree Carver-Thomas, a researcher and policy analyst at the Learning Policy Institute, a California-based nonprofit education think tank.

“We’ve seen a significant drop in the number of candidates enrolling in teacher preparation programs … which means not enough new fully-prepared teachers to replace those that are leaving,” Carver-Thomas said. “Teacher preparation can be expensive and there isn’t that competitive compensation that makes it worth it to go into debt to become a teacher.”

Texas saw a 27% drop in the number of newly certified teachers between the 2014-15 and 2019-20 school years, according to data from the Texas Education Agency. During that same time, the state’s public school enrollment grew 5%.

High rates of educators leaving the field also compound staffing challenges. Texas has averaged a 10% attrition rate over the last decade, according to TEA data. It remains to be seen how this fall’s return to in-person instruction will impact that rate.

Alicia Pineda, 65, would have stayed on for at least another year as a sixth grade language arts teacher at Ascarate Elementary School had she been allowed to continue teaching virtually. Instead, she retired in June after 40 years.

“In spite of COVID, they want to treat it like it’s a regular year,” Pineda said. “I see the kids getting sick, I see teachers getting sick, a friend of mine passed away due to COVID … and my doctor told me ‘you have a lot of underlying conditions that will jeopardize your health.’”

Attrition is particularly high among new teachers. Nationwide, 44% of teachers leave the profession within the first five years, according to a 2018 study by University of Pennsylvania researchers.

In El Paso, an expanding teacher training program aims to keep new educators in the field.

The University of Texas at El Paso’s College of Education launched a paid, year-long residency program in 2019 in which college seniors co-teach alongside veteran educators in EPISD, SISD and YISD classrooms. Research shows that teachers who go through a residency tend to stay in the profession longer, Carver-Thomas said.

Last year, the College of Education unveiled a mentorship program that pairs new teachers in the Canutillo, Fabens and Tornillo districts with instructional coaches from UTEP.

“The effort is really trying to improve the whole continuum,” said Amy O’Rourke, director of the Council on Regional Economic Expansion and Educational Development’s “Choose to Excel” initiative. CREEED is a funder of both UTEP programs.

“You’re elevating the profession, you’re recruiting people to choose teaching as a profession, you’re making sure that the training they go through is really robust and is going to make sure they’re ready day one,” O’Rourke said. “And once they’re in the classroom they’re continuing to receive coaching and support so that not only are they having an impact on student learning … (but feel) like this is the career for me.”