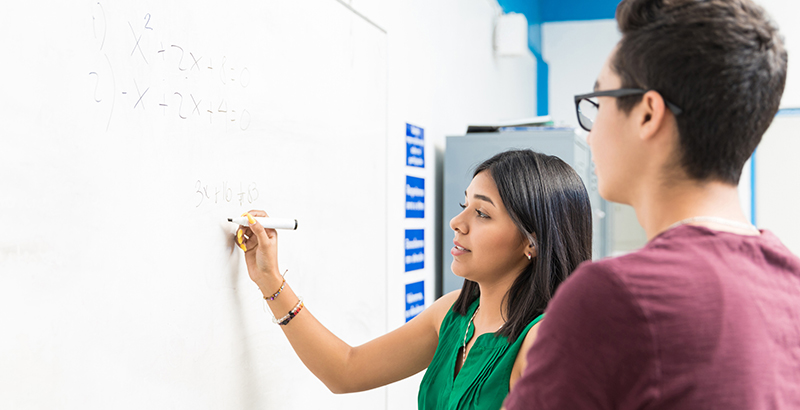 This article originally appeared at GreatSchools, as part of its Transforming High School collection.

When an angry parent approached Principal Michael Mann a few years ago about her daughter’s failing math grade, he was well aware of the problem. His school, North Star Academy Washington Park High School in Newark, New Jersey, knew too many of his students were struggling to stay afloat academically. He saw it in the classrooms and he had the data. The numbers revealed in stark terms how incoming students from other schools were far behind in math and trying — and too often failing — to keep up with the charter school’s rigorous curriculum.

Mann had already set up weekly, teacher-led group tutorials for extra support, stretching educators to the limit of their schedules. He reassured the mother that her daughter was enrolled in the weekly teacher tutoring.

The parent’s response was eye-opening for the principal. He recalls her saying to him, “One hour? It’s not enough. She’s still failing. What are you going to do?”

Mann recalls feeling blindsided by her anger and the truth behind her frustration. “At the time, I didn’t have another answer.”

Later in his office, Mann felt guilty. He couldn’t ask his already overtaxed teachers to take on more work. But the students needed more one-on-one intervention to succeed academically. That’s when he had an “ah-ha!” moment: Maybe some of his students might be up to the job of tutoring their peers.

Mann got to work setting up a peer tutoring practice at his school. His school’s program joins a growing number of high schools using peer tutoring as a way to raise academic success. The practice is simple enough: one student tutors another student. The goal, however, aims to help both students academically, inviting them to be active learners working in tandem toward academic success.

The practice of students learning from other students dates back centuries. But peer tutoring became more formalized in education during the 1800s and by the 1970s was being looked at as an important teaching tool. It is now employed in schools from the elementary years to the college level. For schools with overstretched educators and limited budgets, peer tutoring is considered a cost-effective intervention that’s proven to benefit both the tutors and tutees.

Most often, more advanced students help their peers review and reinforce concepts learned in class, often during study hall periods or sometimes sessions outside of school. But there’s a range of peer tutoring models: Some pair students across a large age gap. Others match partners within the same grade level. Students might take turns as tutor and pupil. Small groups or even entire classes can take the place of one-on-one pairings.

A practice that leads to academic success

Peer tutoring has been shown to produce positive academic and social outcomes for students from kindergarten through their senior year of high school. A 2013 research analysis found students participating in peer tutoring showed academic gains across content areas and grade levels, including students with disabilities; students with emotional and behavioral disorders benefited most.

“I think what is most useful about these programs is not so much that they teach new material to the kids,” says Dough Fuchs, a professor of special education at Vanderbilt University. “But they give students an opportunity to practice intensively the skills that they need in these different academic domains like reading and math.”

A win-win for all students

The benefits aren’t just for students being tutored. In a 2010 study of peer tutoring in science, students reported tutoring motivated them to strengthen their understanding of certain concepts and helped them identify gaps in their knowledge. A 1982 research analysis showed that both tutors and their partners outperformed students in control groups on math and reading tests. “If you organize peer tutoring properly, then what you will get is gains from it for both the tutors and the tutees,” says Keith Topping, professor of educational and social research at the University of Dundee in Scotland.

For some learners, the greatest benefit is having someone in their corner. Kymani Fraser, a senior tutor at North Star in Newark, NJ says he advocated for his tutee with the student’s teachers. As a result, the student received more individualized attention in class, Kymani says, and made him feel more supported and motivated to learn.

“I felt like I was able to make a change in his life, and he was able to bring up his grades,” Kymani says. “Just having that impact on him really made me feel like my role was important.”

Peer tutoring to the rescue

North Star’s peer tutoring program started with small group sessions during study hall periods, and went virtual during the pandemic after students slipped behind in remote learning. Pairs meet twice a week in Zoom breakout rooms, and about 54 percent of students being tutored this year passed a class second quarter that they failed in the first quarter, Mann says. The program also aims to foster social connections and promote a positive school culture, which is one of the reasons Mann allows tutors to request their partners.

As Schools Push for More Tutoring, New Research Points to Its Effectiveness — and the Challenge of Scaling it To Combat Learning Loss

“I think having someone who you’re a friend to, or at least an acquaintance, really helps because it establishes a sense of care and showing I’m caring about you,” explains freshman tutor Sage Jones. “I wasn’t just assigned to you as another person to be on your back. It’s someone who I genuinely care about, the work that we’re doing, and that I want to see you succeed.”

The peer tutoring approach at the School of Industrial Design, Engineering and Art (iDEA) also emphasizes collective success. It’s one of three high schools in Tacoma, WA that offer the BRIDGE program (Building Relationships in Diverse Group Environments.). BRIDGE tutors attend class with their student during the subject they’re struggling in to provide support ranging from help with note taking to help working through connections and discussion themes.

iDEA Co-Director Zach Varnell says it’s not uncommon for a student to act as a BRIDGE in one class and receive help from one in another.

Supporting students at all levels

Peer tutoring programs are often launched to support students who are struggling the most. But it’s important to avoid symbolically labelling kids as “smart” or “not so smart.” So how can you develop a program that benefits all students?

For starters, don’t count anyone out, Topping says. Some students that educators might not immediately think of as ideal tutors — such as English language learners or those with learning disabilities — can have a big impact on their partners, he says, though they might need more guidance throughout the process.

Peer-mediated instruction is commonly used as a strategy to better serve and include students with disabilities. iDEA in Tacoma is an inclusive school where students with and without special education plans learn together in the same classrooms, and the BRIDGE program is part of what makes that possible, Varnell says. To implement something similar, schools should focus on creating a culture centered around community, he says.

“It has to be about every student recognizing that their job in going to school and the reason for going to school is not just to advance your own learning,” Varnell says. “It’s to be a part of the community and recognize that in the community you’re in, we only all succeed if everyone has a path to success.”

Topping advocates for class-wide tutoring, which pairs all students from two classrooms, typically at different grade levels, for tutoring during the school day. He says this avoids labeling students who need help as weak or underperforming, and allows all students to benefit. “If you do it on a whole-class basis, and you do it on a cross-age basis, then you can include absolutely everybody,” he says.

How to do peer tutoring well

The benefits of peer tutoring can be diminished if not implemented correctly. Here are some things to watch out for:

—To be effective, students need instructional training before you unleash them as tutors. One introductory training activity: Ask tutors to walk their partners through tying their shoelaces, step-by-step. This simple exercise helps students learn to teach methodically and thoughtfully.

—Ideally, sessions should focus on practicing skills and encouraging critical thinking rather than memorizing facts, and peer tutoring should supplement classroom learning, not attempt to replace it. “Peer-mediated instruction is not — I underscore the word not — meant to substitute for good teacher-led instruction,” Fuchs says.

—It might be tempting to pair the highest-achieving student with the lowest-achieving student, but Topping says tutoring is more beneficial for both students when they’re closer in ability. Learners see the most gains when there’s about a two-year gap in age or knowledge between them, he says.

—When personality clashes happen, you can give students the option to be reassigned to a new partner, but Topping notes it’s best not to split up pairs that are working well.

Peer tutoring at your school

—If your school has a peer tutoring program, ask how it’s organized and how tutors are chosen.

–If your school doesn’t have a program, start a conversation about peer tutoring by asking about how the school supports struggling students. “What are your early warning systems for knowing that she’s failing?” Mann says. “And then what will happen if and when she does?”

For educators and administrators:

This article originally appeared at GreatSchools, as part of its Transforming High School collection. Meg McIntyre is a contributor to GreatSchools.org and was previously a New Hampshire education reporter with The Keene Sentinel.

Meg McIntyre is a freelance journalist and contributor to GreatSchools.org. She was previously a New Hampshire education reporter with The Keene Sentinel.