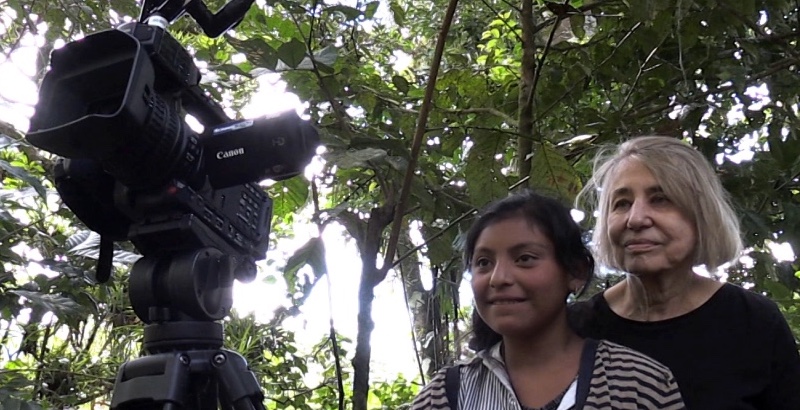 As a New York Times reporter, Holly Carter was struck by the rapid disappearance of international bureaus among American news outlets. Carter worried that the loss of those agencies would lead to a drastic shortfall of informed citizens, which she said could be “dangerous” for a functioning democracy.

As a mother, Carter was growing frustrated by how schools were teaching issues that require empathy. Education — even in her own child’s progressive Manhattan school — simply “was not full enough” when it came to addressing multicultural affairs.

“Our kids are learning a very patronizing sense of how to actually engage in the world,” Carter said. “I was beginning to see that was not a solution for preparing our young people for empathy and participation on a global stage.”

Then it struck her: Adults are often driven by ego and politics. But children are much better at telling things the way they are.

Carter set out to create something that would allow young people around the world to tell their own stories — their own way — in hopes that American students could learn to understand and empathize with people different from them.

In 2007, Carter founded BYkids, an organization that helps young people around the world make short, personal documentaries about their lives by pairing them with accomplished American filmmakers. BYkids’ goal is to help children become better global citizens by using the films — either in the classroom or at home — as a starting point for a deeper understanding of cross-cultural issues.

The process of film creation starts with the BYkids team, which comes up with a broad list of topics they’d like to explore in the coming season. Carter said the stories should reflect universally shared truths but ones that may not necessarily be found on the front page of the news. From there, the team chooses a country to focus on and partners with a local nonprofit organization to help find a subject, who also doubles as the director of the film. BYkids then sends professional film mentors, like showrunner Neal Baer (Law & Order: SVU) and cinematographer Hollis Meminger (The Blacklist, Narcos, Younger), to the countries with camera equipment to mentor the kids throughout the filmmaking process.

Although the stories are told through the lens of a child, BYkids doesn’t stray away from addressing tough topics in their films: What’s it like to be 17 years old and incarcerated at Rikers Island? What about being a 16-year-old and living in displacement for nine years as a result of the Colombian civil war? How about being one of the 500,000 Mozambican children who lost both parents to AIDS? All nine BYkids films document the struggles the teens have faced and aim to bring awareness to issues that children who grew up in the United States may not know about.

“Because they’re kids … we’re able to lean into some really hard conversations,” Carter said. “You can experience that story that could feel very foreign or sometimes intimidating or scary, you share that life, and when the lights come up, you’re actually a friend of this kid.”

The authenticity young people bring to the table while storytelling is a key reason the films resonate with so many people, Carter added.

Today, more than half of students attending public schools are students of color, yet white teachers comprise the majority of the profession, according to the National Center for Education Statistics. Despite having a culturally and linguistically diverse student population, many schools lack a culturally competent curriculum, which has been shown to have a dangerous impact on students’ academic success and mental health. BYkids aims to address this need by producing films that bring representation to other cultures — Yemeni, Nicaraguan and Senegalese, for example — and providing American students with access to global conversations.

In one of BYkids’ films, “Walk on My Own,” 13-year-old Ndèye Fatou Fall tells the story about her village, Keur Simbara, which was one of the first in Senegal to publicly abandon the practices of female genital cutting and child marriage, two traditions that have afflicted West African women for centuries. Ndèye’s film documents the hardships of the women in her village: One has lost two daughters due to complications from female genital cutting, and another was forced to marry a friend of her stepfather at the age of 12. But it also aims to help the world make sense of such traditions while simultaneously bringing forth change to those communities that still practice them.

“Tradition is very strong, and to abandon these practices is difficult,” Ndèye wrote in a statement about her film. “When people from other countries watch the film, if they are still practicing child marriage and female genital cutting, they will wake up after they see this film and will want to stop doing those things.”

Cultural Identity Is Crucial. How to Spot It in Your Child’s Classroom and What to Do About It If It’s Not There

Teachers who use BYkids films in their classrooms are — intentionally or inadvertently — employing tactics for social-emotional learning — a blossoming approach to education that emphasizes the importance of skills like self-awareness, self-management, social awareness, relationship skills and responsible decision-making. Research suggests that SEL trainings can provide positive effects on student achievement, graduation rates, mental health and earnings for students across all socioeconomic backgrounds.

But some experts warn that SEL programs that are divorced from cultural relevance or those that lack an equity perspective can be dangerous for students of color.

“It can be used to really help discipline black and brown children to be better managers of their feelings and emotions, rather than equipping them with skills they need to change a system that rightfully produces anger and resistance,” said Lacy Asbill, the founding director of Moving Forward Institute, a nonprofit organization that focuses on students’ emotional well-being as a critical strategy for improving their academic achievement.

Social-emotional programs, when coupled with culturally relevant content, can, Asbill says, be used to empower all students to reclaim their own stories and equip them with the knowledge and skills they need to rebuild broken systems. This gets at the heart of what BYkids as an organization is trying to accomplish.

The BYkids films air on PBS station THIRTEEN, which reaches 84 million households in America. But Carter said the real impact manifests when educators use the films to inspire students to learn through moving image, as well as start cross-cultural conversations in their classrooms.

BYkids has a partnership with the online collaborative learning community PenPal Schools, which allows students between the ages of 12 and 18 to engage in conversations with other young people globally through a series of online lessons. Students choose from multiple project options on the site, then collaborate with their global peers to help create their project. More than 17,500 students in 64 countries have utilized these BYkids film lessons, according to data released from PenPal Schools.

The team at BYkids wants educators to do more than just show the films in class, so it offers lesson plans to help turn students from passive viewers into active participants in conversations.

Teachers can download learning guides for each film on the BYkids website and then choose from three sample lesson plans — each driven by an essential question designed to challenge students’ thinking.

Questions like “How can you help make change without feeling resentment for those you see as wrong, or even hurting others?” connect to themes from the films as well as other relevant topics in all areas of life. Film summaries, mentor bios, multiple discussion starter questions and suggested projects for future use are also available for educators to use in their classrooms.

Matt Nink, a former teacher and current executive director of the Global Youth Leadership Institute, said he shows the films in his student and teacher workshops because of how well they align with his organization’s mission to tackle diversity, equity and multicultural issues in schools.

Founded in response to September 11, 2001, the Global Youth Leadership Institute is an educator-led organization offering a wide array of programs ranging from educator expeditions in the Dominican Republic to customized high school workshops, to its signature “High School Sequence,” in which students “explore ways to make schools stronger and more inclusive” while sailing on the Atlantic Ocean for five days. All of its programs touch on educating faculty and students in four main areas: collaborative leadership, cross-cultural communication, religious pluralism and environmental sustainability. Similar themes can be found in BYkids films.

To get kids thinking about the real effects of climate change, Nink might kick off the workshop with “My Beautiful Nicaragua,” a film by 12-year-old Edelsin Linette Mendez, documenting how warming temperatures and erratic rainfall have damaged her family’s coffee farm, pushing them into poverty. Coffee crops account for more than 30 percent of the country’s exports, and Mendez’s film highlights the severity of her family’s situation as well as the trajectory for her country’s future, stressing how important it is for young people to seek a more sustainable way forward.

To instruct students on the dangers of religious intolerance and racism, Nink will screen “Poet Against Prejudice.” In the film, Faiza Almontaser, a 17-year-old Yemenese immigrant, recalls how she used spoken word to combat the Islamophobia she experienced from her classmates at her Brooklyn school. Faiza’s film documents her current work as a peer trainer with the Anti-Defamation League, where she instructs her classmates on the repercussions of racism.

And Nink might show “Fire in Our Hearts” at any workshop aiming to cultivate meaningful cross-cultural conversations. In this film, Jayshree Janu Kharpade of India illuminates the social and economic importance of educating girls in the developing world. She tells the story of her own struggles to obtain an education after being taken out of school at the age of 7.

Above all else, Carter hopes that the films will empower other students to tell their own stories.

“To me, that’s the real purpose of education. It’s not getting an A; it’s not going to Harvard,” Carter said. “It’s finding your own voice so you’ve found your power in life.”

And in a world that has become dangerously siloed, “This is meant to be a way to have us remember that we have a shared humanity.”