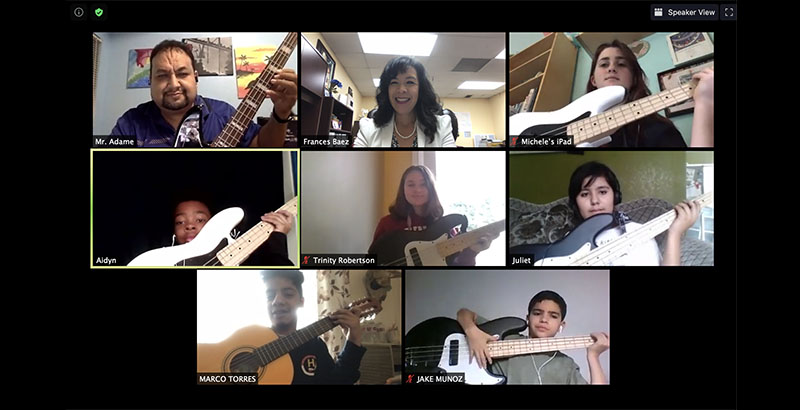 More than 1,000 students are learning to play guitar and ukulele through an enrichment class offered in partnership with Fender. (Los Angeles Unified School District)

As summer approached, Ruthie Seroussi of Los Angeles began to worry about how to occupy her young sons. Even remote learning offered a structure to the day, but with summer camps canceled, she dreaded battles over the TV and Xbox. She and her husband are both attorneys, but he works in an office while she works remotely, so the burdens of child care fall largely on her.

She was thrilled to learn of a unique program offered by the Los Angeles Unified School District that provides a variety of free classes this summer. Her 9-year-old son, Dylan, is taking a visual arts course, while Holden, 12, is learning animation with the makers of Despicable Me.

“It frees up an hour where they’re both occupied doing something I know is constructive in a safe environment,” she said. 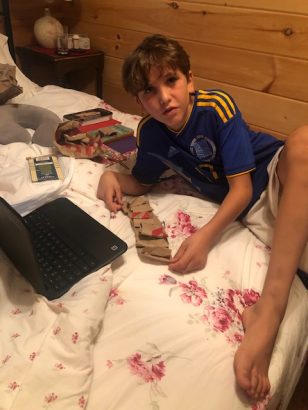 From June 24 until the end of this month, LAUSD is offering a Summer of Learning, open to every one of its 500,000 K-12 students in district-operated schools. In addition to traditional subjects like math and English, there are 42 enrichment courses, including “The Voyage of the Titanic,” involving director James Cameron, a course on space exploration with the Columbia Memorial Space Center and guitar lessons from the makers of Fender guitars. The Los Angeles Chargers are also part of a class on the science, nutrition and medicine of sports.

Learning loss is typical during summer breaks, but it’s expected to take a greater toll this year, given students’ quick migration to distance learning in the wake of COVID-19. According to an April report by the Collaborative for Student Growth, part of the nonprofit NWEA, the school closures caused by COVID-19 can lead to additional “trauma to students, loss of resources, and loss of opportunity to learn that go well beyond a traditional summer break for many families.” Not surprisingly, it finds that those from more affluent communities with more financial resources and flexible work-from-home arrangements will be in a better position to deal with the situation than those from low-income households.

The Los Angeles initiative is one example of how districts are thinking creatively about how to fill these enrichment and learning gaps triggered by the pandemic while supporting students both socially and emotionally over the summer, said Brenda McLaughlin, managing partner at the Sperling Center for Research and Innovation. But few districts appear to be offering anything quite this expansive. “I have not seen anything like it,” said Dennis Schatz, retiring president of the National Science Teaching Association and a senior fellow with the Institute for Learning Innovation. “When I read about this, I went, ‘Wow. Whoever put this together was doing a lot of good work.’”

Given the 12 weeks of remote learning last semester, LAUSD’s chief academic officer, Alison Yoshimoto-Towery, said the district wanted to avoid a “summer learning loss” of five months. “This is about bringing the joy into learning at a time where things are different and maybe feeling not so normal,” she said. The district invested $77 million to provide devices and internet connectivity to students, and there was a commitment from Superintendent Austin Beutner to continue the momentum. “If the transition to online learning is our moon shot, the rocket’s been built and liftoff has occurred. We’re in the early days of an extraordinary voyage,” he said in a May 11 weekly update to the school community.

Even for the more traditional academic subjects, the goal of the program is to “really engage kids on a different level,” Yoshimoto-Towery said. Beutner’s vision, she said, “is to have a summer school like never before,” allowing students to stay connected and have fun while learning at home. A big part of making it happen involved joining forces with more than a dozen community partners. In early April, Yoshimoto-Towery began soliciting partners who agreed to provide services free of charge.

The idea for the Titanic class came from Cameron, said Sandra Martin Alvarenga, coordinator of the Marine Science Magnet at San Pedro High School. He will be participating in a live Q&A with students toward the end of the course. She said that Cameron “connected us with phenomenal guest speakers,” including Don Lynch, a historian with the Titanic Historical Society. She added that the ultimate goal of the class is to “create a project that displays how the Titanic affects us in an incredible way.” She points to the way the ship’s demise was connected to ignoring warning signs and how that can be tied to the current situation with global warming. A total of 500 students have registered for the class. Alvarenga and a science teacher lead the large lecture, while other teachers facilitate small-group instruction among 25 students in breakout rooms. There are activities like a scavenger hunt through a Titanic virtual museum that are intended to provide a positive distraction as well as a creative outlet. “I’m hoping the kids will get a renewed or new appreciation for exploration, discovery, preservation and seeing people follow their passion,” she said. 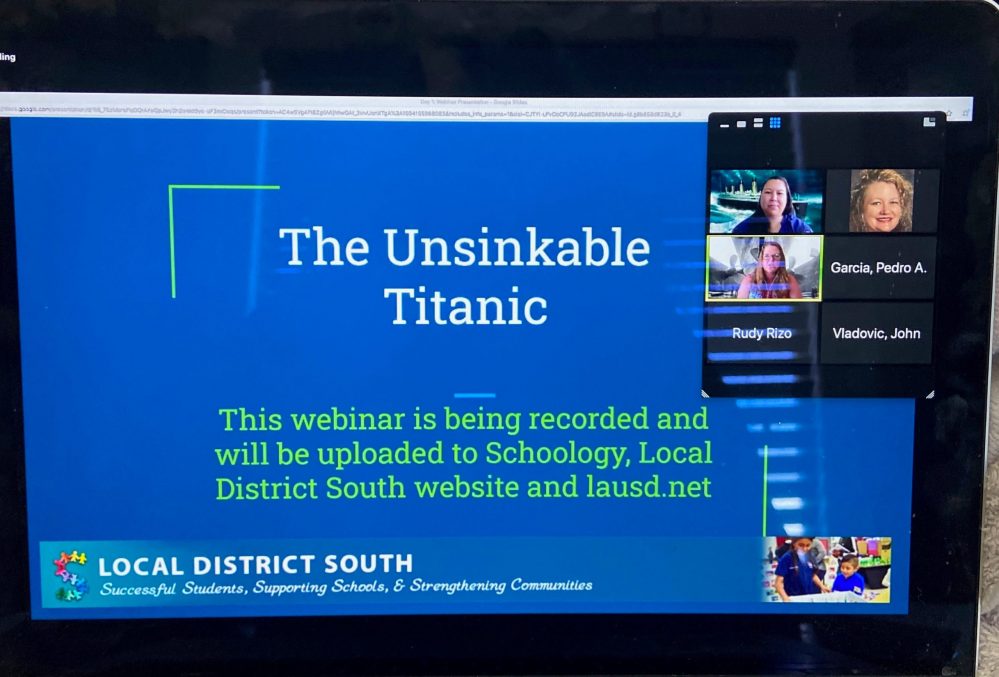 Leaders from Los Angeles Unified’s Local District South introduce “The Voyage of the Titanic,” one of the enrichment classes offered during the district’s “Summer of Learning” program. (Los Angeles Unified District)

Fender Play Foundation, a subscription-based online learning service for guitar instruction, is providing more than 1,000 acoustic, electric and bass guitars — in addition to amps, ukuleles, accessories and free instructional videos through its Fender Play app — to students, at a value of $300,000. “It’s an opportunity for us to help students in the Los Angeles area learn to play and continue to play music while supporting teachers with the online experience,” said Evan Jones, Fender’s chief marketing officer and co-president of the Fender Play Foundation.

Fender developed the curriculum with LAUSD music teachers, who recommend videos to watch and provide instruction to groups of 25 students at a time; those teachers also offer individual sessions to students. The intent is not only to teach music to the 1,000 students who are participating but also show how it can enhance the student’s broader educational experience, Jones said. Students may be asked to play a song by a particular artist, then write an essay about the artist’s impact and background. This Thursday, each student is expected to perform a song with their instrument at a digital celebration. Jones said there’s interest in continuing the program into the fall and committing to a much larger donation.

Roughly 100,000 students registered for classes in the summer program; 6,000 teachers are participating. There is also a YouTube Channel called “A World of Learning” that anyone can access. Some classes are offered for high school credit, allowing an opportunity to either make up classes or retake a course that a student got a low grade in, or to just get ahead, Yoshimoto-Towery said. Each student can take up to four classes. The district has spent $50 million for the program; she says there will be an effort to get additional state funding to cover costs.

Though the L.A. program is particularly ambitious, Yoshimoto-Towery said it wouldn’t be difficult to replicate “if there’s a vision and a will.” Reggie Smith, CEO and executive director of the U.S. Distance Learning Association, said programs like this provide an opportunity for schools to be especially creative. He applauds the initiative for heading off the problem of summer learning loss. But he adds that it’s important to avoid “Zoom fatigue.” Schatz agrees. He advises using fewer worksheets and finding a way to use video in real settings, such as outside. McLaughlin suggests not overwhelming students with content and focusing on material that can be communicated easily and that students can engage in. “Break it down and scaffold technology use,” offering activities in easily digestible bits for kids and families, she said.

Holden Newhouse along with a minion from Despicable Me that he drew for his animation class. (Ruthie Seroussi)

Meanwhile, Holden is thoroughly enjoying his animation class. He’s excited to learn directly from people who made some of his favorite movies, like Despicable Me.

In his class, students watch pre-recorded video clips from various high-level employees at Illumination, who each work in different departments. After watching one video about making objects appear as if they are moving, students designed their own flip books to show, for instance, a ball bouncing. After another class, in which they watched a video about proportion, they learned how to draw eyes closer together or farther away, or big or small noses. Then, they were asked to draw their own characters in line with characters from the Despicable Me movie.

“This really helped because I was just getting bored,” Holden said. “I’m running out of books to read.” He wants to gain a better understanding of animation and how it works so he can make films on his own.

“It’s a fun way to occupy my time with something I’m actually interested in. It’s awesome.”