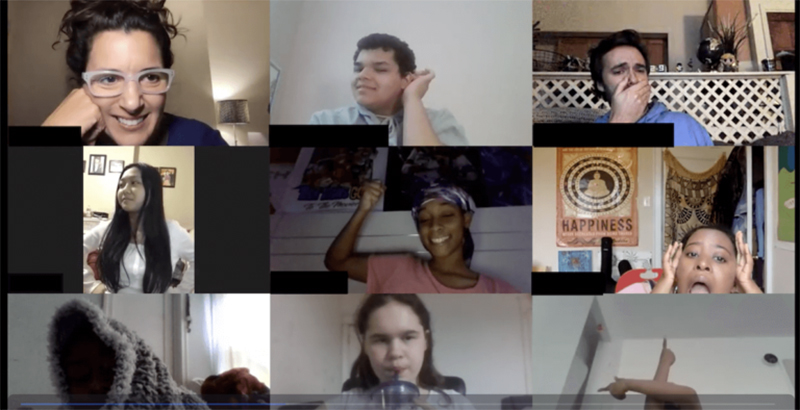 It’s a Tuesday morning in March, and 14-year-old Sloan Williams and two of her friends are cracking each other up over Zoom.

“Yes, and…we call it a Banana Car Seat!” her friend replies, before the three eighth graders from Charles W. Henry Middle School in Mt. Airy burst into another round of laughter.

It’s all part of an exercise the students are doing through The Unscripted Project, a program created by recent Wharton grads Meera Menon and Philip Chen. Goofy as this particular workshop—in which students were tasked with acting out a fake commercial to sell an imaginary product without any script or prep—may sound, it’s rooted in the mission of increasing students’ communication skills, self-confidence, and team-player mindsets.

“Improv has been shown to have all kinds of benefits,” says Menon. “For any improv game, you can gear it towards whatever skill you want students to practice. What we choose to focus on are mistakes, and reframing people’s relationships with failure.”

Williams says that the program helped her break out of her comfort zone and empowered her to feel more comfortable speaking up in class. And she’s not alone: 88 percent of the 146 students who participated in The Unscripted Project in the fall semester reported feeling more confident in front of their peers than they did before the program. Pre- and post-program surveys revealed that there was also a 15-percent decrease in the number of students who screened positive for social anxiety.

In addition, social self-efficacy—or, how students understand their interpersonal relationships—increased in 65 percent of students; emotional self-efficacy—how students understand their emotions—increased in 58 percent of students. The benefits of improv are well-documented enough that Wharton is even beginning to offer improv classes to business executives, grad students, and MBA students.

These outcomes are among the myriad reasons Menon and Chen were named President’s Engagement Prize winners by Penn president Amy Gutmann in April of 2020; the duo was awarded $100,000 to implement their idea and scale it to reach more than 300 middle and high school students throughout the School District of Philadelphia.

“We feel very strongly that theater and improv should be a part of K-12 education because it is such a powerful tool to build interpersonal and social-emotional skills like being confident, understanding different perspectives, adapting to new people and situations, as we had experienced ourselves,” Menon says.

While their original intention was to launch in-person, the pandemic forced them, like everyone else, to pivot the program to a virtual format. Since launching last fall, 359 students will have participated in the program by the end of the school year, with the support of five teaching artists, 10 volunteers, and Menon and Chen; they worked in nine Philly public schools and one charter school, meeting with students anywhere from 45 to 90 minutes via Zoom, one day a week.

Many youth-focused programs throughout Philly already use arts—music, poetry, writing, and visual arts, for example—to nurture and support students. But the decision to use improv, a decidedly less traditional performative art, as a vehicle for empowerment was natural for Menon and Chen.

Chen, originally from Melbourne, Australia, and Menon, from the Bay Area in California, collided on their first day of college at Wharton, when the two were placed in the same group for a freshman scavenger hunt; they’ve been friends ever since. They both had a background in the theatrical arts and improv, and continued to stay involved in theater at Penn.

One afternoon during their sophomore year, they were at a meeting of the Penn Social Entrepreneurship Movement Club, when they brainstormed the idea for The Unscripted Project as a perfect way to blend together the worlds they were equally passionate about: business and theater. It wasn’t until their senior year, however, that The Unscripted Project became more than an idea, as the two decided to apply for the President’s Engagement Prize to implement it.

“We got the opportunity to turn this idea into something tangible when we heard about the President’s Engagement Prize, and throughout our senior year we worked on building out the idea, key partnerships, infrastructure, and proposals,” Menon explains. They found out they won the prize last April, and started working on the project full-time later that month.

Part of the project’s success stems from how resource-light improv is: There are no tools or tech required. The classes consist of lighthearted improv games that foster a safe space, a sense of community in which students can chat, laugh, be silly. In fact, one of the only rules in improv is that students are encouraged to make mistakes and be comfortable making them.

“Nothing is a mistake in improv,” says Menon. “It’s more like a gift, and you get to decide what you want to do with that gift.” Improv, Menon explains, is all about imperfection, and making people step out of their comfort zones to develop communication and community skills. Their program specifically focuses on reframing people’s relationships with failure and developing growth mindset—that idea, made popular by Penn Professor Angela Duckworth, of rewiring your brain to think of failures as an area of growth and an outlet for improvement.

Improv also teaches people to be team players, a skill that is important for success in high school, college, and the workforce. One of the key tenets of improv, after all, is the phrase “Yes, and…” which encourages improv teammates to adapt on the fly.

If, for example, someone says “Here’s this chocolate cake,” and you respond “No, it’s not,” well, that puts a kibosh on further conversation. If, however, you respond by saying “Yes, but I like vanilla cake,” that demonstrates being open to further dialogue, and opens the door to building off of the moment to create something bigger.

On top of the data Menon and Chen have documented, they’ve been particularly encouraged by the anecdotal evidence of the program’s benefits. They’ve watched more introverted students feel more comfortable in group settings. They’ve seen one student’s stutter vanish.

“I noticed that, whenever they would introduce themselves or when we would do a prepared question and answer activity, the stutter would come out. But, when we would go to improvise with this student, the stutter sort of disappeared, and it was sort of this magical moment,” says Menon. “I don’t know if there’s any scientific basis for this phenomena—it could be just this crazy thing that happened in our classes—but it was really cool to watch.”

For all of the success of the program so far, Menon acknowledges the limitations of running it in a virtual format, particularly one year into online learning. Sometimes students are not at their computers when they’re scheduled to be; other times, teens have jobs or household responsibilities that they have to fulfill.

Ever mindful of equity, the staff models the same flexibility they’re hoping to impart to students, as they adapt games to be available with or without video, or via chat instead of audio, to account for students’ capabilities and capacities.

“I think our biggest concern is always equity. We really try to make sure that there are some ways for students to participate, even if it’s not fully over video and voice in Zoom. There’s so much that we can’t control, which has been tricky for us to manage, but we decided that we will work the best we can with the students that are able to and then continuously invite other students into the program,” says Menon.

The President’s Engagement Prize will fund the nonprofit through the middle of 2021, so Menon and Chen are already seeking continuance funding. Their projected annual budget is $150,000. In December, they held a fundraiser that generated $25,000. They’re looking into the prospect of offering programming for a fee to private schools and organizations, to offset the fee for public schools. Having secured nonprofit 501c3 status in October 2020, they are preparing to generate additional sources of funding, so that they can reach as many schools throughout Philadelphia and beyond. By the fall, they’re striving to be in 20 to 25 Philly public school classrooms.

Williams, reflecting on her time in the program, adds, “I would definitely recommend this program to other students. I think my favorite thing was being able to create a scene and being able to have the audience visualize something that you’re visualizing, but that isn’t really there. It made me be more open and communicative, and I think a lot of students could use that.”

“Anyone,” says Menon, “can benefit from the power of improv.”

This article was originally published by The Philadelphia Citizen and published in partnership with the Solutions Journalism Exchange.

Mahala Garcia-Bartch is a contributor to The Philadelphia Citizen.