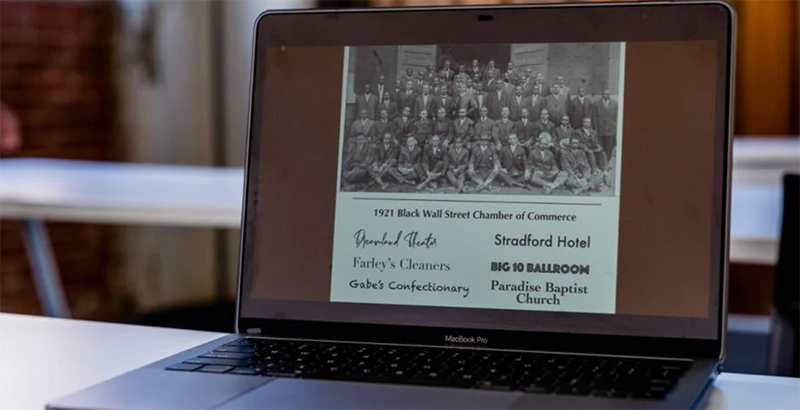 Now, a group of young students are bringing some of those businesses to life in a project that links coding and history.

Ahead of the centennial commemorating the Tulsa Race Massacre earlier this month, Urban Coders Guild was working with local students to build websites for the businesses destroyed during the horrific event a century ago, as if those businesses were still around today. The project can’t undo the horrors of what came to be known as the Tulsa Race Massacre — one of the worst acts of racial violence in American history — but the people behind it hope that it will help spur knowledge around the horrific event as well as teach students an invaluable skill along the way.

“While a good many of the businesses were rebuilt after the 1921 Tulsa Race Massacre, none of them exist today,” says Mikeal Vaughn, founder and executive director of Urban Coders Guild, a nonprofit organization providing STEM education opportunities to underrepresented communities in Tulsa.

So the students are reimagining what they would look like today by building the websites. Along the way, they are learning coding skills and learning about a historic event that has only recently been talked about in mainstream media.

“The students were given some creative license to use their combined skill sets to create an awesome website for each business that tells that business’ story as if it were an existing business today,” he says.

Erina Katoh, 14, is among a group of students focusing on The Cozy Barber Shop, which was destroyed during the massacre.

The site, Katoh says, was created to look like it might if it was still around today, meaning it has a variety of pictures and hairstyles that customers can choose from. It also includes information about the barber shop and location and the owner of the business.

Katoh says Urban Coders Guild is a “prep” course for the future because she has learned how to interact with others as well as listen to and accept input from others.

Urban Coders Guild offers web and mobile app development courses and lessons in the fundamentals of project management and entrepreneurship, Vaughn says. To date, more than 60 middle and high school students have been involved.

In past projects, students worked on prototypes for a Black business directory. “In everything that we do, we try to instill a commitment to using technology to address the needs of the community,” Vaughn says.

The first semester of the course was instruction, says Jeremy Benedik, the program’s web development instructor, while the second semester has focused on the creation of the sites, which launched this week. Urban Coders Guild also partnered with Tulsa Community College students to create the content and logos as part of their coursework.

Like with many things, the pandemic has produced challenges for the program. The students turned to online lessons, which, according to Benedik, many of the students were already familiar with due to their student classwork turning virtual last spring.

“Struggling at times to keep the students engaged after a day full (day of) Zoom classes and learning to code became a second hurdle, really a by-product of the first,” he added.

Emilia Nguyen, 11 and in sixth grade, says she was aware of the Race Massacre before the project but wanted to get involved to learn more about her community.

Nguyen says she was nervous going into the class but soon realized it was a very friendly and inviting atmosphere in which learning and asking questions is paramount.

“I was scared that it was going to be something where everyone kind of already knows coding and they’re looking at me weird when I’m trying to ask a question because I’m confused and I’ve never done this before,” she says.

“But no matter if you’ve done it before or you haven’t, they still include you and they ask you to reach out if we need to ask any questions, because they know that this is a very hard concept that we’re learning. They show that they’re very proud of us that we’re taking it all in and we’re working hard at it. So they definitely understand.”

She and some other classmates are currently working on creating the online presence for their second business, she says.

She adds that the coding has been challenging and they might do some back-and-forth with the instructor to get it to work.

“I’m not going to say that it’s super easy, but it’s definitely a good learning experience and it’s super fun because you get to spend time with other people and interact with them and ask them about their different opinions on things,” she says. “You get other people’s insight on your work and they’ll tell you what they know and you tell them what you know.”

Kristi Eaton is a contributor to Next City