Support The 74 and stories like this one. Donate Today!
News
School Choice 2016

How a Newark Monastery Trains Young Men in School — and Life

The Seventy Four marks School Choice Week (Jan. 24-30) with a series of stories celebrating educational options and innovation. Read our coverage here.
(Newark, New Jersey) — That the students are the ones running the show at St. Benedict’s Preparatory School is evident from the moment the day begins.
During school-wide morning meetings, student leaders scan the crowded gym to make sure their younger peers are paying attention to the presentations. Teenagers are responsible for leading the school in daily Bible readings and presenting their own team and club announcements in front hundreds of students and teachers.
When no one from the freshman basketball team volunteers to report the results of their recent game, they are chided by school administrators.
“It’s important that you not ignore one another’s successes,” Father Edwin Leahy, a Benedictine monk and the school’s headmaster, told the group.  “Announce the scores of your teams…Nobody is having the success that you are having.”
Here at St. Benedict’s Preparatory School, the all-male student body isn’t just handed a prep school education, they are trained to take charge of it. The 7th-12th-grade school is sponsored by the Benedictine Abbey of Newark, a monastery that has embraced a big-hearted mission: to give young boys who may be excluded from opportunities because of poverty and race a rigorous education, emotional support and the leadership skills they need to thrive.
“I feel like people have your back,” Francis Jean-Paul, a 15-year-old freshman, said of the school. “It’s like a family.”
St. Benedict’s efforts were thrust into the national limelight in 2014 after the much-talked about release of  “The Short and Tragic Life of Robert Peace.” The book chronicles the experience of a young man who graduated from the school and went onto to attend Yale University only to be become ensnared in Newark’s drug trade and killed.
But the school has been educating students in families with enough gumption to seek a top-notch private education but not enough money to pay for it for more than four decades. About 85 percent of the 530 students receives need-based financial aid for the $12,500-a-year tuition. Despite their financial circumstances, more than 95 percent of seniors head off to college after graduating, including a regular crop admitted to Ivy League schools. 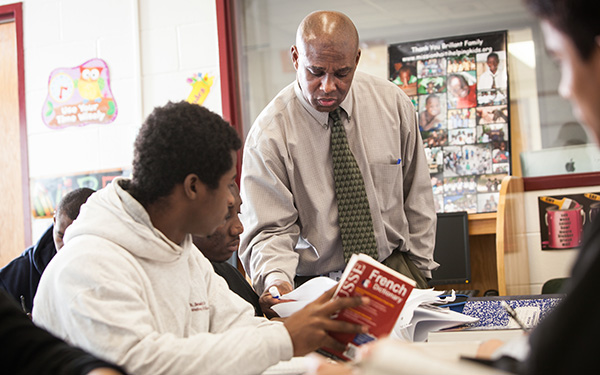