Hooray for Alice Smith, the 90-Year-Old Hoosier Who Crocheted 300 Hats For Every Kid at Middlebury Elementary 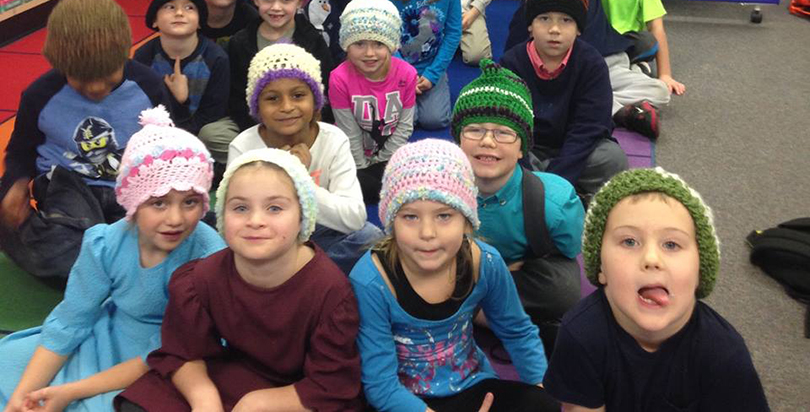 This article is one in a series at The Seventy Four which profiles the heroes, victories, success stories and random acts of kindness to be found at schools all across America. Read more of our recent inspiring coverage at The74million.org/series/inspiring.
Last summer, 90-year-old Alice Butler Smith had the idea to make hats for students at Middlebury Elementary School. So while the temperatures will still sweltering, she got to work, circling loops over a crochet hook, spiraling row after colorful row into a cozy hat. Then another.
Then a couple hundred more.
Her deft hands worked quickly, crafting 300 hats in six months’ time, one for each of the school’s 294 students plus a few lucky staff members.
“I have been crocheting every day. Sometimes making one or two hats — and, if I worked really hard at it all day long, sometimes three,” Butler Smith told the Goshen News.
The hats were ready just in time for National Hat Day on Jan. 15, when Butler Smith visited the school and spoke to the students about the process of choosing colors for the hats.

“When I crochet, I put all the colors together and make each one different and hope that somebody enjoys them,” Butler Smith said. “I love giving the hats to people who smile.”
In the end, each of the 300 hats employed a unique and different design — a deliberate choice that will surely help when the young students inevitably lose track of their new accessory.
“The cool thing is not a single hat is the same. Every single hat is different. Maybe some of them might have the same color, but the design that she put into them is different,” first grade teacher Joseph Parks explained to his students. “That will be great, especially when we hang our hats out in the hallway because everyone will have their own hat and we won’t get them mixed up.”
Butler Smith and the children listened as Parks read “The Mitten Tree” by Candace Christiansen, a story about an elderly woman who notices a boy at a bus stop who hands are bare on a cold, snowy day. She knits a pair of mittens and places them on a tree near the stop for him to discover.

After the presentation, it came time for students to choose a hat. After careful consideration, 7-year-old Carrie Mullet chose a lavender hat with white stripes.
“They are all so pretty,” Mullet told the paper. “But I love this color.”
Students thanked Butler Smith by gifting her a basket of yarn.
Have you witnessed something inspiring at a school this week? Share the good news with us at info@the74million and we will do our best to get it on the site.
Submit a Letter to the Editor
January 26, 2016