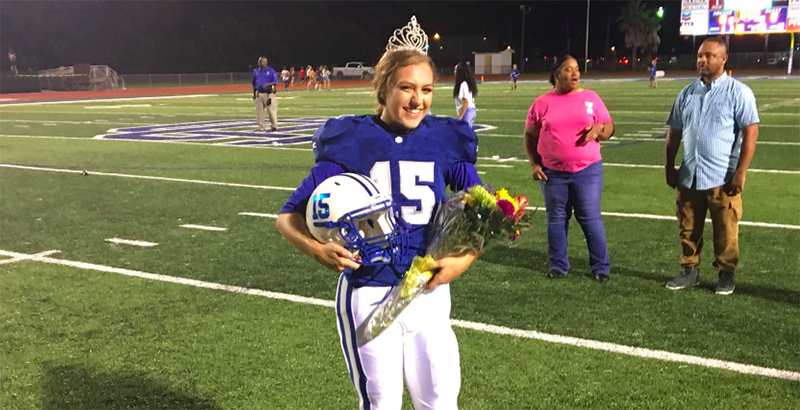 It could only happen in Mississippi.

Two weeks ago, Kaylee Foster, 17, donned a tiara and clutched a bouquet as the newly crowned homecoming queen of Ocean Springs High School.

Ocean Springs wins 13-12. @_kayleefoster kicker for the Greyhounds scores the winning field goal in overtime. She was also crowned the homecoming queen earlier in the evening. pic.twitter.com/Pd71Hmwzkz

Kaylee kicked two field goals in a game that ended with the Ocean Springs Greyhounds defeating the George County Rebels, 13-12. Her final boot sealed the deal.

“I love football and I love Ocean Springs,” Kaylee said after the game, Gulf Live Sports and SunnySkyz.com reported. “I really don’t have any words.”

This is really fantastic, I love what this young woman and her family have done and what she has done for Ocean Springs.

Kaylee’s head coach, Ryan Ross, told Gulf Live Sports, “I’d like to check the whole country and see if it’s ever happened before.

“It certainly makes for a memorable weekend for the whole team, but especially Kaylee. It’s a big night for her. I’m proud of her and I’m proud of the team.”

I wish they let girls play football when I was in high school!!! I woulda been out there!!🏈💪🏽

It was a rough road.

With 40 seconds left in the game, the Rebels were inside the Greyhounds’ red zone, but thanks to an interception, the game went into overtime.

“When I looked up from my kick, I saw this big guy with his hand up. I was like, ‘He just blocked it. He did. We have to go into the second overtime.’ And then he didn’t block it. It went in.”

All hail the queen! Kaylee Foster not only won homecoming queen, but kicked the winning field goal on the same night! #GMADay https://t.co/3CRlbL6Q9X pic.twitter.com/WkO2I5AsBz

A 9-year-old girl heard from her father that the homecoming queen had kicked a field goal for Ocean Springs, and said, “That’s the kind of girl I want to be.”

“Oh, my goodness,” Kaylee said. “I love that. I think that is so special. I hope she really does decide to play football, because it’s been wonderful and taught me so much.”