Holiday Hero: 8-Year-Old Wisconsin Boy Aims to Collect a Thousand Toys for Kids at the Same Children’s Hospital Where He Had Surgery 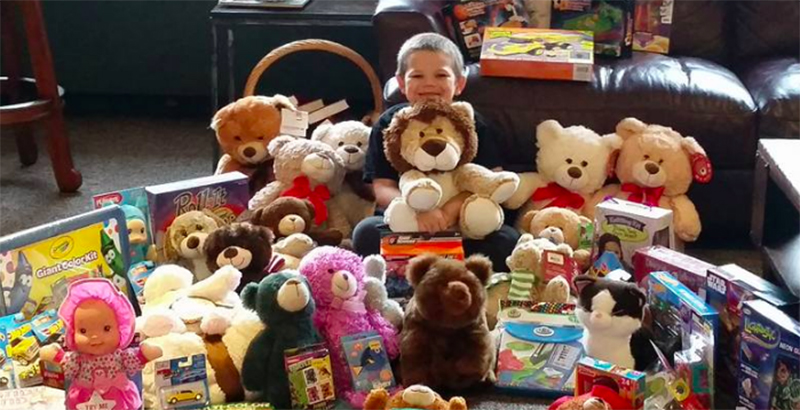 Cody Struble from Caledonia, Wisconsin, knows that when you’re a kid spending Christmas at a hospital, sometimes a toy is all you need.

The 8-year-old hopes to collect 1,500 gifts for children in hospitals over the holidays.

Here is what Cody has gotten in donations already.

As reported by local ABC affiliate WISN, Cody required three surgeries by the time he turned 5. Needless to say, Cody’s spent a lot of time at Children’s Hospital of Wisconsin.

What saw him through all those surgeries? His yellow stuffed animal Oso.

In a Facebook video shared by Cody’s aunt Sonia, the boy hugs his furry friend as he realizes that hundreds of children will spend their Christmases at the very same hospital. Cody reflects: “I cried the whole way home except for when [my mom and I] pulled in the driveway and I said I wanted to do a toy drive.”

According to the Cody’s Toys for Children’s Hospital group on Facebook, he collected more than 500 toys in 2016, when Cody was just 6 years old.

The Caledonia community rallies around Cody each year to help achieve his goals. Community members can drop off donated toys at Zarate’s Auto from late October to mid-December.

Christopher Schmaling, a Racine County sheriff, plans to use the SWAT truck to deliver the toys to the Children’s Hospital.

When asked why he continues to organize these annual toy drives, Cody told WISN: “I just try my best to be nice to people.”