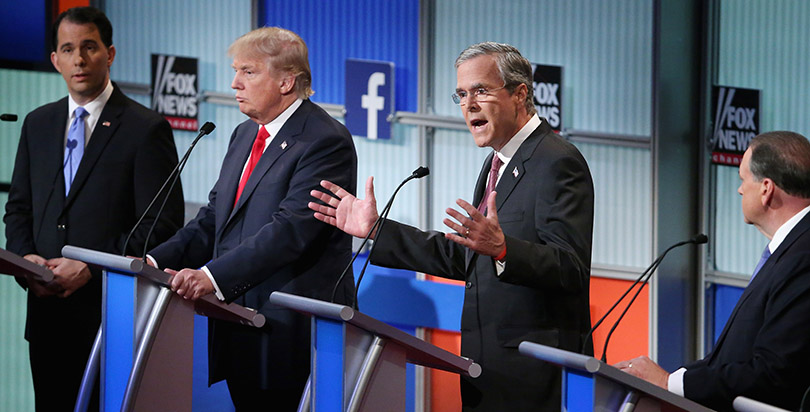 Seventeen Republican candidates debated in two sessions for more than three hours Thursday evening and the only K-12 education issue discussed in any depth was the contentious Common Core.
Former Florida Gov. Jeb Bush was asked about his support for the standards, which moderators portrayed as contradictory to the common GOP belief that education is best handled locally. Bush’s support for the standards is clearly outside of the GOP mainstream: Ohio Gov. John Kasich is the only other GOP candidate to support them, and the audience in Cleveland booed upon mention of the Core.
Bush was careful to clarify that he does not back federal involvement in writing standards or requirements for states to adopt them.
“I don’t believe the federal government should be involved in the creation of standards, directly or indirectly, the creation of curriculum or content. That is clearly a state responsibility,” he said. “If states want to opt out of Common Core, fine, just make sure your standards are high.”
Common Core was developed by state leaders, and the Education Department has incentivized, but not mandated, adoption of “college- and career-ready” standards through the Race to the Top grant program and No Child Left Behind waivers. (Check out The Seventy Four’s flashcards on the Common Core for more.)
High standards, “honestly measured,” are essential to make sure American kids can keep up in the competitive global economy, yet only a third of students are ready for college or career, Bush said.
“If we are going to compete in this world we’re in today, there is no possible way we can do it with lowering expectations and dumbing down everything. Children are going to suffer and families’ hearts are going to be broken that their kids won’t be able to get a job in the 21st century,” he added.
Florida Sen. Marco Rubio struck back against Bush, articulating a widely held Republican distrust in giving greater power to the federal government.
The Education Department “will never be satisfied, they’ll never stop with it being a suggestion, they’ll turn it into a mandate,” Rubio said. They will “use Common Core or any other requirements that exist nationally to force it down the throats of our people in our states.” (See the full exchange here, via transcript from Time magazine.) 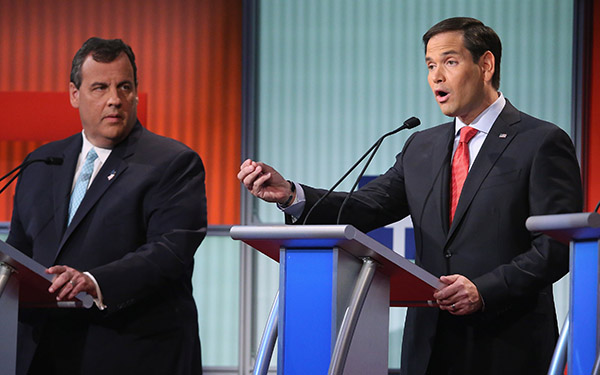 Republican presidential candidates New Jersey Gov. Chris Christie (L) and Sen. Marco Rubio (R-FL) participate in the first prime-time presidential debate hosted by FOX News and Facebook at the Quicken Loans Arena August 6, 2015 in Cleveland, Ohio. (Photos by Getty Images)
Bush also used the question on Common Core to highlight the initiatives he started in Florida: “robust accountability,” ending social promotion in 3rd grade, greater school choice, expanding vouchers and limiting the power of teachers’ unions.
He earned plaudits from Fox News commentator Brit Hume post-debate for what Hume called Bush’s best articulation of his education policies yet in the campaign. Other pundits Friday morning said Bush generally was a flop in a night dominated by the red-meat rhetoric of Donald Trump.
Education otherwise only came up fleetingly, and neither higher ed nor early ed got a specific mention. Mike Huckabee, in response to a question on limiting the size of the federal government, said there is “no role at the federal level for the Department of Education.” New Jersey Gov. Chris Christie and Wisconsin Gov. Scott Walker mentioned their efforts to take on unions.
At an earlier debate for the seven candidates who didn’t poll high enough to reach the main stage, discussion of education occurred even less. Texas Gov. Rick Perry in his closing statement mentioned his state’s high graduation rates, particularly for black and Hispanic students. Louisiana Gov. Bobby Jindal opened by touting that he “fought for statewide school choice, where the dollars follow the child, instead of the child following the dollar.”
Those hungry for more in-depth discussion of education issues won’t have to wait long. Bush, Christie, Walker, Kasich, Jindal and former Hewlett Packard CEO Carly Fiorina have all signed on to The Seventy Four’s Aug. 19 education election summit in New Hampshire.
Submit a Letter to the Editor
August 7, 2015