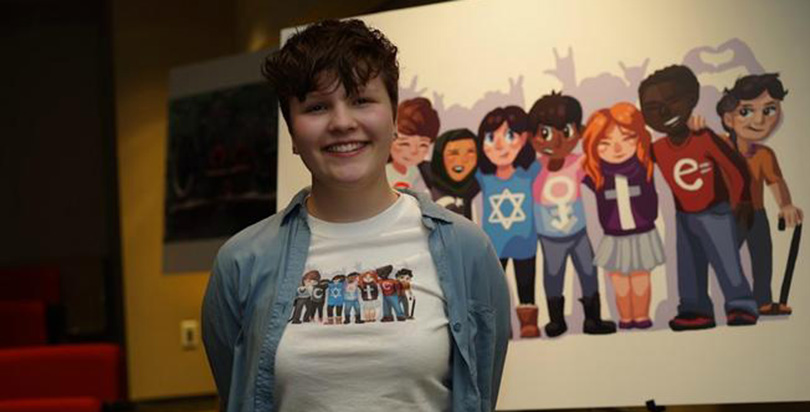 Sarah Harrison, a 15-year-old from Bunnell High School in Stratford, Conn., sees a future “where we can all learn to love each other despite our religion, gender, race, ethnicity, or sexuality.”
And she has drawn that future for the world to see.

Sarah’s depiction of eight teenagers representing a range of diversity is the winner of the 2017 Doodle 4 Google competition.

“I was thinking of how there’s a lot of animosity toward diverse communities of people in the world right now,” she told NBC Connecticut. “So I wanted to draw something that I hoped would show that we can all get along well, and that it’s possible for us to be happy with each other. I want everyone to try to be more open, accepting, and respectful to people. You don’t know what they’ve been through — and they don’t know what you’ve been through — so we all deserve respect from each other.”

Sarah’s doodle, chosen from among 140,000 entries on the theme “What I See for the Future,” was displayed on the Google homepage last Friday and Saturday. In addition to the national exposure of her artistic talent, Google is giving her a boost for her education: a $30,000 college scholarship.

? Let's hear it for Sarah Harrison, whose vision of "a peaceful future" is our #Doodle4Google contest winner! https://t.co/UGJRsUnrbX pic.twitter.com/WCyVKTEpFp

Sarah also will have the opportunity to meet with the Google Doodle team at its Mountain View, Calif., complex, and her school will get $50,000 for technology to foster the next generation of STEM professionals.

Clearly, Sarah’s vision of a world where “everyone is safe and accepted wherever they go, whoever they are” was something special.

“Ultimately, Sarah’s doodle captured the best of everything we saw, representing values like diversity, inclusion, and respect in an inspiring and creative image,” said William Floyd, head of external affairs for Google.