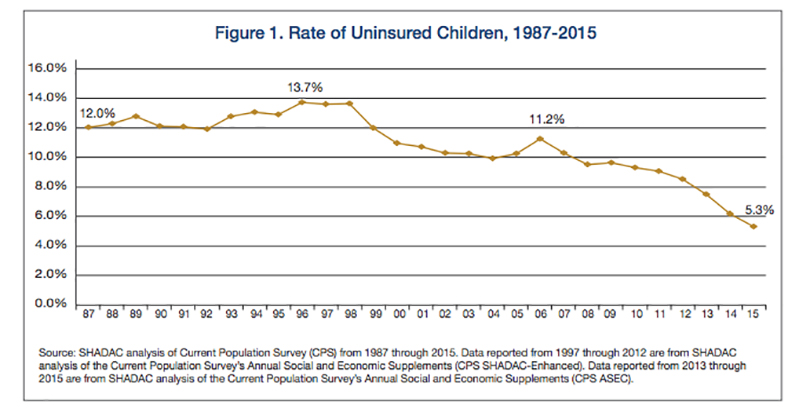 Senate Republicans revealed their Obamacare repeal proposal this past week following weeks of covert negotiations. While the plan would transform insurance markets, the flurry of cost analyses and political speculation has hidden a critical aspect of the story: how unraveling Obamacare will affect K-12 students by threatening gains in academic achievement.
When Republicans in the House narrowly passed their own version of repeal in May, The 74 looked at the cost borne by states if federal Medicaid dollars — greatly bolstered under Obamacare — were rolled back. Grim findings from the progressive Center on Budget and Policy Priorities show that school districts could be left competing with doctors and hospitals for scarce remaining dollars. That could lead to austerity budgets with no room for speech and occupational therapy, mental health counselors, and other services underwritten by Medicaid.
(The 74: How Republicans’ Bill to Replace Obamacare Could Cut Billions of Dollars From America’s Schools)
The legislation that will likely be voted on next week preserves the House bill’s sweeping cuts to the entitlement, which furnishes roughly $4 billion annually to school districts (a major supplement to the chronically underfunded revenue streams under the Individuals with Disabilities Education Act). But Medicaid isn’t the only piece of the GOP’s repeal efforts that will touch classrooms.

Photo courtesy: Georgetown University
In the years since Obamacare’s passage in 2010, the number of American children without insurance has sunk rapidly. Some were enrolled in beefed-up Medicaid programs, but others gained coverage through the newly established state exchanges. If the funding for both of those initiatives is eliminated by congressional Republicans, the Urban Institute predicts, some 4.4 million kids could lose coverage by 2019.
Leaving aside the public health costs of such a development, the academic footprint could be enormous. A wealth of research suggests that access to early medical care through insurance programs like Medicaid leads to better academic and life outcomes down the line. One 2014 paper from the National Bureau of Economic Research found that increasing childhood eligibility for Medicaid could decrease the risk of dropping out of high school by as much as 6 percent, and increase the likelihood of college completion by 3 percent.
“Our estimates suggest that the long-run returns to providing health insurance access to children are larger than just the short-run gains in health status,” the authors wrote, “and that part of the return to these expansions is a potential reduction in inequality and higher economic growth that stems from the creation of a more skilled workforce.”
These findings aren’t necessarily surprising; few would expect young children who don’t regularly see a doctor or have their vision corrected, for example, to achieve at the same level as their better-resourced peers. But in the seven-plus-year debate over government’s role in providing insurance to the public, few observers have accounted for the fact that uninsured kids simply don’t do as well in school.
Submit a Letter to the Editor
June 25, 2017