Hettleman: Most Students in Special Education Don’t Need to Be There. It’s Time to End the Broken Promises and Reinvent the Process 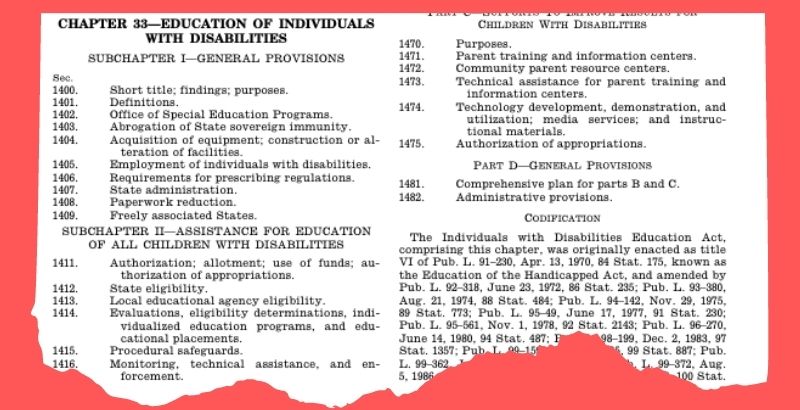 By many accounts, students with disabilities are suffering the most from lack of schooling during the pandemic. But even before COVID-19, the special education system that was supposed to help them compensate for their disabilities was widely seen as dysfunctional.

It may seem ill-timed to think about a major reform of special education when schools are besieged with trying to reopen. Still, during times of upheaval, there are rare opportunities to find big solutions to big problems. The reinvention of special education fits that bill.

This reinvention is long overdue. Only 10 percent of students with disabilities in fourth grade and 6 percent in eighth grade scored as proficient in reading on the 2019 National Assessment of Educational Progress. Math results were no better.

You may think, aren’t rock-bottom scores all that we should expect? All students in special education are disabled, aren’t they? Actually, they’re not — at least, not the great majority of them. The NAEP numbers don’t include students with significant cognitive disabilities, who are generally excluded from the tests and make up only a small proportion of special ed students. The rest — those who are not exempted from testing — do not have, in the truest medical or clinical sense, disabilities that would preclude their success in general education.

The majority of students in special education don’t legally or educationally belong there. Yet, for a number of reasons, they are referred for special ed, where the poor quality of the education they receive prevents them, as well as students with more profound disabilities, from achieving higher.

So, why did they wind up there?

The root cause is teacher desperation, particularly in financially strapped districts with large concentrations of students who are poor and of color. General education teachers with large classes are overwhelmed by the large number of at-risk students who, early in elementary school, fall a year or two behind their peers. These students have ample cognitive capacity to catch up and keep up if they receive evidence-based instructional assistance. But, typically, schools don’t have the funding for such interventions.

The students fall further behind, impeding instruction and exhibiting disruptive behaviors. At that point, teachers and administrators see referrals to special education as their only practical recourse, even though these students are not legally qualified.

Under the Individual with Disabilities Education Act (IDEA), students who are not severely cognitively disabled should not be found eligible for special education unless they have received appropriate evidence-based interventions before referral. But expediency is the mother of special education invention, and most are mislabeled as disabled and placed — or, less politely, dumped — into special education anyway. They are found eligible mostly under the IDEA classifications of specific learning disability (including dyslexia), speech or language impairment and other health impairment (mainly attention deficit disorders). These are genuine learning difficulties, but they can be addressed in general education. For example, best instructional practices for students diagnosed with dyslexia are substantially the same as those for all struggling readers.

Reading experts estimate that between 50 and 75 percent of struggling learners, many with some form of dyslexia, are unnecessarily and wrongfully stuck in special education. I’ve seen this firsthand in my experience as a pro bono advocate for more than 250 low-income students in special education in Baltimore and nearby districts.

Contrast these students with children having severe cognitive disabilities who are the public face of special education. IDEA recognizes that these students can’t generally be expected to attain the same academic standards as their non-disabled peers. But here’s the shocker: Students with severe cognitive disabilities comprise only around 15 percent of all students in special education.

The reinvention of special education must raise the academic and life skills achievement of the relatively small number of these students while keeping out the large number of ineligible students. The next reauthorization of IDEA must, as one legal author writes, “reclaim special education from over-represented African Americans and instructional casualties and place it back in the hands of the genuinely disabled.” Margaret McLaughlin, a professor at the University of Maryland College of Education and a special education expert, has long sought to “alter the construct of ‘disability’ under the IDEA and take special education policy back to its roots as an education law that pertains only to students with clear and evident disabilities.”

This can be accomplished by stronger enforcement of IDEA’s intent to limit special education primarily to students who are severely cognitively disabled, and by making sure general education has the wherewithal to provide timely interventions to struggling learners. That’s already supposed to happen. IDEA and state laws urge or mandate systems of tiered interventions, usually within the framework of Response to Intervention (RTI). An abundance of research shows the effectiveness of RTI tutoring in enabling struggling learners to meet grade-level standards.

This is a formidable challenge. But it can be met if, during and after the pandemic, we expose the mistruths and broken promises of special education.