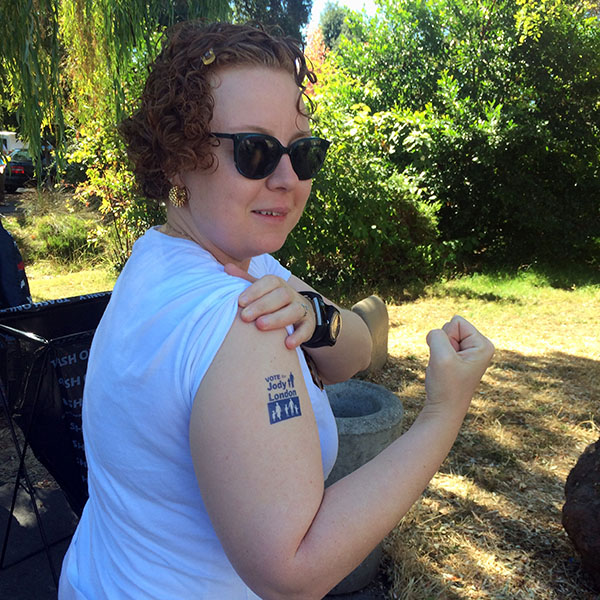 Lawyer Maha Ibrahim shows her support for incumbent Oakland school board candidate Jody London at the Temescal Farmers’ Market. (Photo by Kathleen O’Connor)
“I can’t be a good financial guardian when we operate twice as many schools as other districts of our size,” she said.
Don Macleay, London’s opponent, has taken a stronger tack — calling for a full moratorium on charter schools, though his family chose one for their own child. He said his family had to look outside the district to find the bilingual Spanish program they wanted, but he added that he believes Oakland has the means to offer these types of programs within its own schools.
“I just don’t see why this couldn’t be done within our local schools,” he said.
Enrollment grows, competition increases
Further fueling the schools debate in Oakland are the city’s surge in real estate prices and overall gentrification as more white and middle-class house hunters are getting priced out of the San Francisco market and turning to Oakland for its (relative) affordability and easy commute.
The influx is making the competition for the most sought-after neighborhoods, and their schools, fiercer than ever. The value of a median-priced home in Oakland is now $626,500, up more than 12 percent from the year before, according to data compiled by Zillow. Still, it’s a bargain compared to San Francisco, where the median-priced home value is $1.1 million.
The resurgence of interest in Oakland real estate is also rapidly changing the demographics in certain schools and neighborhoods.
Peralta Elementary in North Oakland is one such school. In 2007–08, the student body was 24.11% white, 37.94% black and 4.35% Latino. It’s now 57% white, 16% black and 12% Latino.
In addition to demographic shifts, enrollment in Oakland public schools, both district-run and charter, has begun to slowly increase after many years of decline. This is no small factor in a city where 17,000 children never set foot in any public school, district-run or charter.
Charter schools are gaining students. City charter schools do not turn in their enrollment figures until Oct. 31, but the district shared statistics that showed that enrollment in charters increased by approximately 1,000 from last year. That includes the addition of Lodestar Charter School and KIPP’s expansion from 5–8 to K–8, as well as smaller increases at a few other schools.
For Charles Cole III, a voter and district employee — his job is to engage more parents in Oakland schools — the charter-versus-district debate obscures what the board should be focusing on: how the district is serving its neediest families. 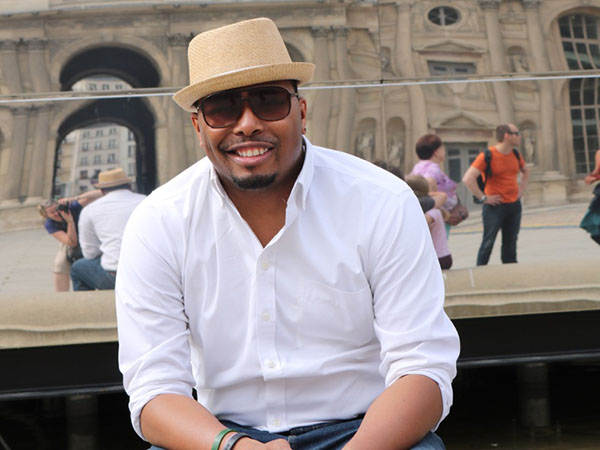 Education advocate Charles Cole III, who attended Oakland public schools and now works as an engagement specialist for the Oakland Unified School District. (Photo by Kathleen O’Connor)
“I’m agnostic about the delivery system,” said Cole. “Public, charter, even private at this point. We’ve struggled for a long time to serve our kids. I personally look at how we serve black kids, especially black boys, because I was one, and it hasn’t always been good. I didn’t get everything I needed [as a student here]. It could have been a lot better. In the same breath, though, I think the district has improved a ton. It’s a lot safer, for one. We actually do have thoughtful leaders and teachers focused on equity.”
Cole defined equity as “doing what is needed to serve those most in need, which is ultimately better for everyone.”
He doesn’t have children in the district, but he’s a product of the Oakland Unified School District, and he said his history mirrored that of many struggling families in the city. His parents abused drugs. They moved often. His mother would have been exactly the type of parent who could not have navigated school choice or enrollment as it stands now. Choice under the current system for his family would have been no choice at all.
‘Break the sorting machine’
Others share a similar view — that when it comes down to it, voters are looking for a system that supports their family’s educational goals.
Dirk Tillotson is the founder and executive director of the nonprofit Great School Choices, which supports community-based charter school development. He also writes at Great School Voices and One Oakland United.
“When around a quarter of kids attend charters and many families have children in both sectors [in Oakland], it’s pretty obvious that most parents don’t care about the distinction if they get a good school that treats them fairly,” Tillotson said.
Wilson came to Oakland with sterling education reform credentials via The Broad Academy, which is funded by the Eli and Edythe Broad Foundation and trains school leaders looking to transform urban public schools. But Wilson’s public comments have largely stressed the need for district and charter schools to better assimilate. 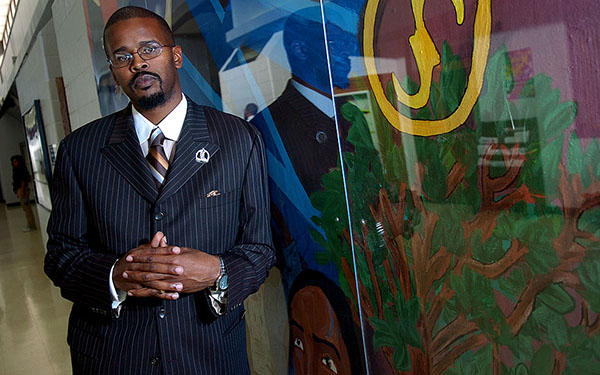 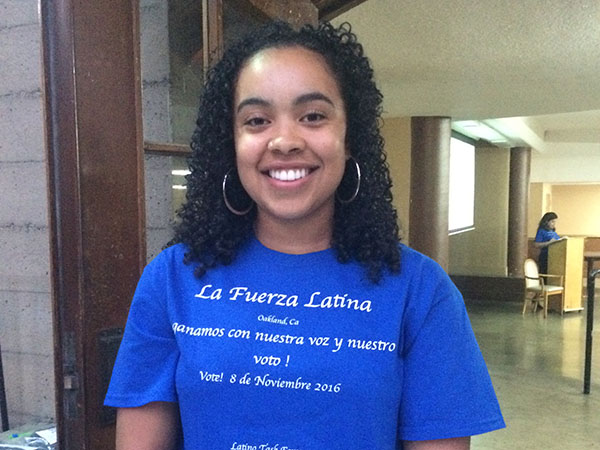 College and Oakland public schools graduate Imani Curtis-Contreras at a candidates’ forum for Latino voters at St. Jarlath’s Church in Oakland in September. (Photo by Kathleen O’Connor)
Luckily, she said, her parents fought for her to gain access to challenging classes.
She now holds a degree from San Jose State University (Class of 2015), where she studied athletic training. She hopes to pivot toward work in public health.
She doesn’t feel cheated, she said, just “sad” that it can take so much effort to make the most of Oakland’s public schools.
“There were always, like, three kids who never got any textbooks at all,”  she said.
When voters go to the polls Nov. 8, Cole, the Oakland graduate and community engagement specialist, hopes they think of what’s best for all students.
“I’m going to have choice because I have privilege. I have degrees and a little money,” he said. “But what about those people who don’t? I’m dedicated to improving our traditional public schools. We need to be innovative. We need to do school better.”
The Eli and Edythe Broad Foundation provides funding for The 74.