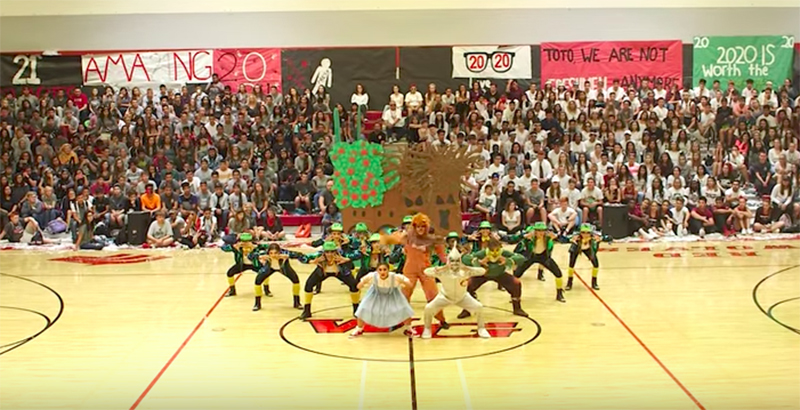 If there’s a school out there that does a pep rally better than Walden Grove High School in Sahuarita, Arizona, then it sure hasn’t found out about YouTube yet.

The six-year-old school impressed the world in 2016 with a Pixar-themed dance at its homecoming assembly.

And this fall topped it all with a “Wizard of Oz” routine that must be seen to be believed.

As captured in a YouTube video that posted more than 1.3 million views in just the first two weeks, the seven-minute performance merges contemporary songs with clips from the movie, sets, and full costume.

Another amazing homecoming performance from The PAC! Check it out on 'thepac wghs' YouTube channel! There's no place like Walden! 🌈 #homecoming #thepacdanceteam #waldengrovehs

To keep it so 2017, Katy Perry’s “Roar” highlights the Cowardly Lion gaining confidence and Taylor Swift’s “Bad Blood” marks the failure of the Wicked Witch. The Tin Man shows off his sweet moves to Fingazz’s “I Can Make Ya,” and “Insane in the Brain” by Cypress Hill lets the Scarecrow take his turn.

Even Pee-wee Herman took to praising the school on social media.

Stop what you're doing and watch* this AMAZING "Wizard of Oz" pep rally!! https://t.co/piOAT6xddd pic.twitter.com/HH3S8Dt405